Pakistan thumped Australia by 356 runs in the second Test in Abu Dhabi to win their first Test series against the visitors in twenty years. Misbah-ul-Haq scored the fastest half century in Test cricket, whilst Younis Khan was declared Man of the Series.

"Every individual performed and I'm really happy about that. I can't describe my feeling."

Pakistan won back to back Test matches against Australia to clinch a historic 2-0 victory. The Green Machine demolished Australia by 356 runs in Abu Dhabi on 03 November, 2014. This was their first Test series win against the visitors in twenty years.

The second test was particularly special for winning captain Misbah-ul-Haq as he scored the fastest fifty in Test match history. He also equalled the record of Sir Vivian Richards for the fastest Test century in fifty-six balls.

Pakistan came into the Test series without their star players and were low on confidence, especially after suffering a 3-0 defeat in the ODI Series against The Kanagaroos.

In the first Test, Pakistan thrashed Australia by a huge margin of 221 runs in Dubai on 26 October, 2014. This was Pakistan’s first win against the Baggy Greens since 2010. 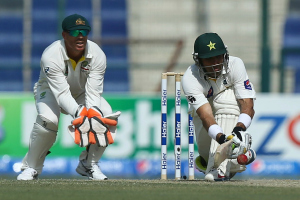 A century from Younis Khan (106) and Sarfaraz Ahmed’s quick fire 109 off 105 balls set the tone in Pakistan’s favour early on.

A hundred from David Warner (133) helped the visitors to get a good start. But with all the other batsmen failing to score big, Australia could only manage a total of 303 in reply to Pakistan’s 454 in the first innings. Pakistan took a crucial lead of 151 runs going into their second innings.

It was Ahmed Shehzad (131) and Younis (103*) who built the platform for the big win by stringing together a 168 runs second wicket partnership in Pakistan’s second innings.

Shehzad became only the second Pakistani opener after Salman Butt to score a century against Australia since 2002. 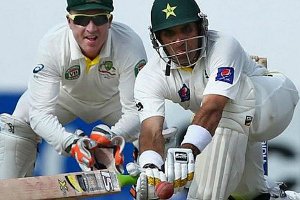 Pakistan had set Australia a mammoth target of 438 to win, but the Aussies crumbled for 216. The hosts took a little over two sessions to win by 221 runs, taking a 1-0 lead in the series.

Younis Khan who scored a century in both innings to reach his record breaking 26th hundred in Test cricket was named Man of the Match. At the post match ceremony, the ever smiling Younis said:

“Thank you to my followers for the support. I wanted to come back after the results in ODI’s and T20. I worked with Grant Flower for week. We tried out a lot of different things. I got hit in ribs and shoulder. I was ready for them.”

Pakistan went into the second Test knowing that they would need to carry on playing consistently to keep Australia off their back.

The Gang Green gained an early initiative after scoring a massive 570-6d. Pakistan’s innings consisted of a fine double hundred from Younis (213), along with a century each from Azhar Ali (109) and Misbah (101).

Australia replied unsuccessfully as they managed to score a below par total of 261. With the exception of Mitchell Marsh (87), the Australian batsmen once again failed to read the Pakistani spinners. 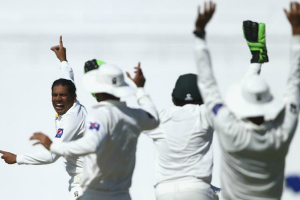 Fast bowler Imran Khan was the pick of the bowlers, claiming 3-60 in only his second game.

Pakistan did not enforce the Follow On as they preferred to bat again. With two days to go, the Green Shirts were inching closer to a famous series win.

Misbah scored the fastest fifty and equalled the fastest Test century record of Sir Vivian Richards. He was well supported by Azhar who also notched up his second century of the match.

Misbah (100*) and Azhar (101*) remained unbeaten as Pakistan eventually declared their second innings on 293-3. On day 4, Pakistan managed to get a few late wickets as Australia were left reeling on 101-4.

Whilst Marsh and Steven Smith (97) showed some resistance, it was only a matter of time before Pakistan could start celebrating.

After Marsh departed for a valiant forty-six, Australia lost their last five wickets for thirty-eight runs. Babar took 5-120 as Pakistan defeated Australia by 365 runs to win the series 2-0. 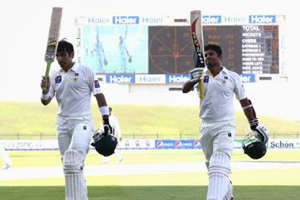 “They played outstanding cricket in both Tests and we have been outplayed. Unfortunately, all three facets [failed]. It’s been the track record of Australian cricket [in Asia] for a long time, unfortunately.”

Man of the Match and captain Misbah applauded his team saying:

“It’s really an honour for me to lead this side, the way everybody played. Every individual performed and I’m really happy about that. I can’t describe my feeling. We were working really hard and playing good cricket but not winning, we just ensured that we would keep on doing the basics.”

“It’s really good to have a youngster like [Yasir]. Playing a side like Australia, for the first time, he’s got really good temperament, and in the coming future he can really deliver for us,” added the forty-year-old.

Younis Khan was adjudged Player of the Series after scoring 468 runs in four innings. During the series, Younis scored two consecutive hundreds, followed by a double century.

While Pakistan remain Ajmal-less, this certainly is a morale boosting win for the Men in Green. Misbah who was labelled for years as a Tuk Tuk (slow) player has now become the new Dhoom Dhoom Star of Pakistan Cricket.

Faisal has creative experience in the fusion of media and communication and research which increase awareness of global issues in post-conflict, emerging and democratic societies. His life motto is: "persevere, for success is near..."
Fauja Singh ~ The World’s Oldest Marathon Runner
Playing It My Way by Sachin Tendulkar