Fitness Icon, Fauja Singh is one of the most remarkable runners the world has ever seen. Being the oldest marathon runner in the world, Singh has influenced future generations with his sheer courage and determination.

"I don't eat more than I have to. I don't think about money or land, I just keep myself happy."

Punjabi legend Fauja Singh has lit the running world alight for the last twenty years. At the age of one hundred, Fauja Singh sensationally became the oldest man to run a full marathon.

He accomplished this special feat by completing the Toronto Waterfront Marathon in 2011.

Earning nicknames like Running Baba and the Sikh Superman, the name everybody most fondly knows him by is the Turbaned Tornado.

The youngest of four children, Singh was born on 19 April 1911 in Beas Pind, Punjab, British India. The exact year of his birth is unrecorded as India did not register births until 1964.

The name Fauja means Army. However, he did not live up to his tough name early on. Singh had a weakness in his legs that only enabled him to hobble. His mobility improved at the age of ten when he finally managed to walk more freely. 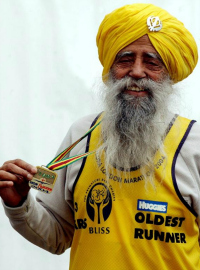 It’s quite ironic that this young child with weak legs became the oldest marathon runner in the world. With sheer commitment, will power, mental strength and positivity, Singh came through some of the toughest journeys of his life.

Like most men in the Punjab region, Fauja Singh grew up becoming a farmer. Singh married and had three sons and three daughters. Whilst running was a hobby, he stopped when the India-Pakistan partition came into force in 1947.

Singh returned to serious running in 1995. He sought solace in his passion after experiencing personal tragedies. His wife, Gian Kaur, passed away in 1992. His grief though, was comforted with a solemn celebration of her life.

Two years later however, tragedy struck once again when his son Kuldip was killed in a construction accident – a scene which Singh witnessed himself. While two of Singh’s sons had moved away from India, Kuldip had stayed behind working with his Father at their family farm.

Following his son’s death and having slipped into a form of depression, Fauja Singh was asked by his children to leave India. He chose to join one of his sons in Ilford (London), UK. The former village man had become an Essex boy overnight. 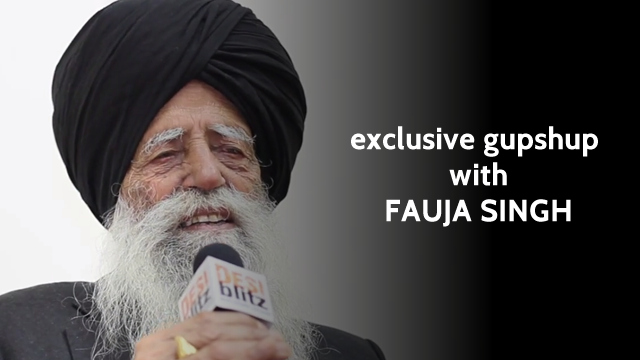 Soon after settling into a new routine, Singh found the harsh memories of Kuldip’s accident were still haunting him.

To help allay these, he joined the local community and started running with them — something he had not done in a long time. Singh found this therapeutic and helped him escape.

“Running took over my time and thoughts,” Singh said. “It was God’s way of keeping me alive and making me what I am today and I’m grateful for that.”

Realising the strength and stamina he still possessed, Fauja Singh chose to take his running a bit more seriously. His age did not deter him and he was still as fit as a fiddle.

He met amateur runner, Harmander Singh in February 2000 and promptly appointed him as his coach. If anybody could be naive in a sweet way, it would be Fauja Singh.

After turning up to his first training session fashionably attired in a three piece suit, everything had to be adjusted from his running gear to managing his expectations. He was made to realise that a marathon was actually 26 miles and not 26 km.

Singh’s ambition was to make his London Marathon debut in only two months, which he managed to do in April 2000. During his career, Singh ran many marathons, including six in London, two in Toronto and one in New York.

He even travelled to Lahore (Pakistan) and across different parts of India, participating in a number of races. His running achievements can only be described as nothing short of amazing.

In reply to a question about the secret behind his fitness, Singh exclusively told DESIblitz: “I don’t eat more than I have to. I don’t think about money or land, I just keep myself happy.” 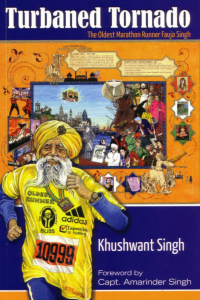 “I am very careful about different foods. My diet is simple phulka daal, green vegetables, yoghurt and milk. I do not touch parathas, pakoras, rice or any fried food,” he added.

Touching on his spiritual side, Singh also said: “I go to bed early taking the name of my Rabba as I don’t want all those negative thoughts crossing my mind.”

Recognised for his running, it was no surprise that Fauja Singh became the oldest man to be featured in a PETA campaign in October 2011. He was also honoured with being a torch bearer at the 2012 London Olympics.

Before he knew it, global sporting brand Adidas asked Singh to partake in an advertising campaign alongside fellow legends Muhammad Ali and David Beckham, helping to promote their slogan of ‘impossible is nothing.’

Singh went ahead with his plan of retiring from competitive running after participating in the Hong Kong Marathon in February 2013.

Post retirement, he still continues to run for good causes, for pleasure and for the goodness of his health. He is an active member of a group called Sikhs in the City.

His biography, titled Turbaned Tornado is very inspirational to many of his young and old fans. In the book, writer Khushwant Singh describes his roots and journey, including the monumental impact Fauja Singh has made on a global scale.

Competitive running may be a thing of the past for Fauja Singh, but it seems there’s plenty of energy left in him as he continues to show the world that nothing is impossible.

Rupen has been passionate about writing since childhood. Tanzanian born, Rupen grew up in London and also lived and studied in exotic India and vibrant Liverpool. His motto is: “Think positive and the rest will follow.”
Sania Mirza wins Doubles Title at WTA Finals 2014
Pakistan beat Australia in 2014 Cricket Test Series