The world’s oldest married couple, Mr and Mrs Chand shared their 109th and 102nd birthday respectively in the Bradford home on Sunday November 23rd, 2014, with family.

"Eat and drink what you want but in moderation. I have never held back from enjoying my life."

Karam Chand and his lovely wife Kartari share their birthday on the same day.

On Sunday 23rd November, 2014, Mr Chand turned 109 and his wife turned 102 respectively, they are also believed to be the world’s longest married couple.

The couple had celebrated their joint birthdays with their family that spreads across four generations, including eight children, 27 grandchildren and many great grandchildren.

The couple have been married for almost 90 years since tying the knot in December 1925.

One of their children, Paul Chand was immensely proud of his parents and seeing them married for almost a century. He said: “It has been a special day for my family and for us all to be able to come together like this.” 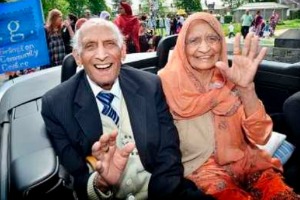 It is not every day a couple reach the age of 102 and 109 and to help mark this occasion, there were extra relatives in the Bradford home, West Yorkshire to help celebrate: “Relatives have flown in from India to be with us.”

When questioned on what their secret to a long life is, Paul Chand said: “People are so impressed by my parents, They always ask me: ‘What do you eat? what are you feeding them?’ I tell them: ‘If I knew that I would be eating the same thing myself’.”

Luckily Mr and Mrs Chand opened up to reveal more. Mr Chand, a former mill worker smokes one cigarette a day before his evening meal and partakes in drinking a tot of whisky three to four times a week.

A joyous Mr Chand says: “Eat and drink what you want but in moderation. I have never held back from enjoying my life.”

These are certainly wise words to keep in mind. Meanwhile Mrs Chand says: “We have always eaten good wholesome food, there’s nothing artificial in our diet.”

And when asked on the secret to their long marriage, she simply said: “We just get along with each other and we are family focused.”

She then went on to say: “We know that being married for 89 years is a blessing, but equally we will be ready to go when its time. It’s all up to the will of God, but we really have lived a good life.” 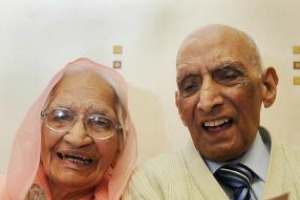 While marriage is often seen as losing its importance in today’s society, Mr and Mrs Chand’s commitment to one another shows that it is still a deeply respected institution.

In fact, some people who had read about the couple told the Metro, how we could learn a thing or two from Mr and Mrs Chand.

Michael said: “This puts our broken country to shame, where people split up when they find out it isn’t a constant bed of roses.”

Paul, another reader said: “Marriage isn’t what it used to be, honesty and commitment is the core of any wedded bliss. It’s time to learn how this couple did it and take inspiration from them.”

Their marriage is evident of two people sticking together and working out any issues they have, rather than ending marriages through quickie divorces.

DESIblitz wishes them both ‘Happy Birthday’ and all the best for the future.

Amarjit is a 1st class English Language graduate who enjoys gaming, football, travelling and flexing his creative muscles writing comedy sketches and scripts. His motto is “It’s never too late to be who you might have been” by George Eliot.
Sex Gangs target Asian Girls for Grooming
Nominations for the Asian Wedding Awards 2014