A 74-year-old Indian woman from Andhra Pradesh gave birth to twins. By giving birth, she is believed to have become the oldest mother.

"My six-decade-long wait has finally come to an end."

The elderly woman underwent a caesarean at a private hospital in the city of Guntur.

Erramatti gave birth to twins, both baby girls. She chose to undergo an IVF procedure in order to achieve her dream of becoming a mother.

She has been married to 80-year-old Yerramatti Raja Rao for around 57 years. He is a farmer from East Godavari.

Since her marriage, Erramatti has been wanting to become a mother but she had no success.

The couple visited every available doctor in East Godavari after 10 years of being married. The Indian woman failed to conceive.

Decades passed but the couple did not have a child and Erramatti desperately wanted to become a mother. They soon decided to try IVF.

However, their initial attempts failed after the procedures in Chennai did not yield any results.

In 2018, the couple reached out to Dr Sanakkayala Umashankar, an IVF expert based in Guntur. Erramatti decided to undergo IVF treatment again.

She said was inspired to try again for a baby after one of her neighbours conceived aged 55.

The elderly woman became pregnant in January 2019 and she remained in the hospital for the entire nine months of her pregnancy. Medical professionals closely monitored her throughout the process. 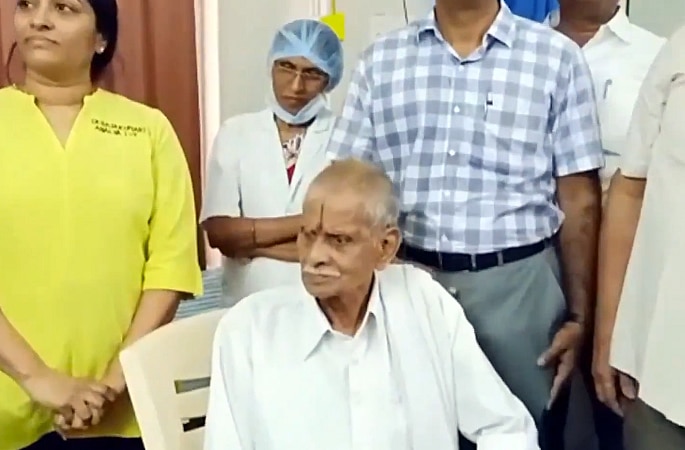 Erramatti had no problems delivering the babies as she had no medical issues like diabetes and hypertension.

When she went into labour, doctors decided to perform a caesarian as they considered the woman’s age.

The Times of India reported that their entire family, including Erramatti’s 95-year-old mother, went to the hospital to witness the historical event.

It was reported that the IVF clinic paid for her treatment because success would mark such a historic achievement.

After the birth, Erramatti said: “I cannot express my feeling in words.

“These babies complete me. My six-decade-long wait has finally come to an end.

“Now, no one call me infertile anymore.

“I thought about taking help of IVF procedure after a neighbour conceived at the age of 55.”

“I don’t think she will have any major health issues in the post-delivery period.”

The woman continues to remain in the hospital so that doctors can monitor her.

Dhiren is a journalism graduate with a passion for gaming, watching films and sports. He also enjoys cooking from time to time. His motto is to “Live life one day at a time.”
CEO Ridhima Singh & Doctors charged with $115m Medicare Fraud
Indian Grandson killed Grandfather with help from Mother