The amazing 104-year-old marathon runner, Fauja Singh, joins hands with Ford in a new ad campaign with the theme ‘Unlearn’. DESIblitz has more.

“I wanted to have a new focus in life, but that also benefited others.”

The 104-year-old runs through a park on a cold winter day in Ford’s brand new campaign, centred around the theme ‘Unlearn’.

Speaking behind the scene, the British Indian record breaker explains what ‘unlearn’ means to him.

He says: “When I went through a major trauma in my life, I had to overcome it in a positive way. I started taking exercises more seriously.”

Fauja lost his beloved wife in 1992 and his son in a construction accident in 1994. When he moved to London to live with his other son, he found new purpose in charity marathons.

He continues: “I wanted to have a new focus in life, but that also benefited others.”

Among the numerous world records that he has set over the years include being the first 100-year-old to complete a marathon (Toronto Waterfront Marathon).

He also celebrated his 100th birthday in 2011 by fronting campaigns for Nestlé India and PETA (People for the Ethical Treatment for Animals.

Fauja is not slowing down at a mighty age of 104, promoting a revamped Ford and its Mustang model in the new campaign created by WPP agency, Blue Hive UK. 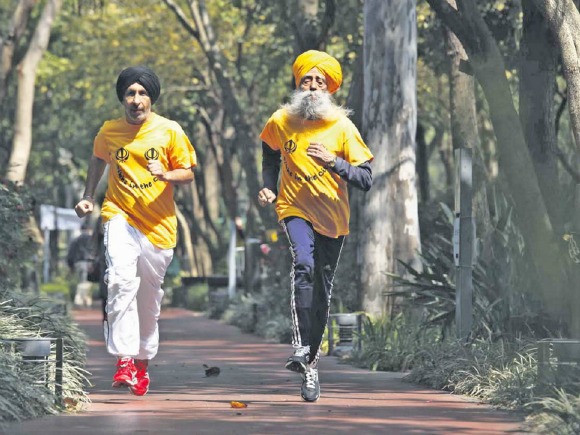 Ford’s marketing manager, Richard Beard, says: “Unlearn is about casting aside preconceptions, having another think about Ford, and reappraising. It’s about not being held back by limiting beliefs.”

The incredible British Indian runner is undoubtedly a fitting choice to represent such spirit for the automotive brand.

His secrets to long and healthy life? “My diet is simple – phulka, dal, green vegetables, yoghurt and milk. I take lots of water and tea with ginger.

“I go to bed early, taking the name of my rabba (God) as I don’t want all those negative thoughts crossing my mind.”

Find out more about the incredible Fauja Singh in our interview.

Image courtesy of The Independent