"Probably one of our best matches of the year together. So ah yeah it’s a great way to finish.”

This victory was particularly special and historic for Sania as she became the first Indian female tennis player to win the year ending World Tour Finals.

The WTA finale played at the Singapore Indoor Stadium consisted of a knock-out format, featuring the top eight doubles teams in the world.

Having come through two tough matches in the quarter-finals and semi-finals, Sania and Cara were up against Su-Wei Hsieh of Chinese Taipei and Shuai Peng of China in the final.

Mirza and Black were on a roll from the world go. The third seeded Indo-Zimbabwean pair demolished their second seeded opponents and the defending champions Hsieh and Peng in straight sets 6-1-6-0. The one-sided match finished exactly in an hour. 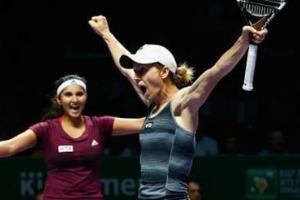 After the match, speaking to the media, Sania said:

“We’ve had some amazing matches, some matches that thank God we won. We would like to look back at them with good memories. But yeah we saved the best for the last.”

“We were really sharp today and we played very well together, like Cara said we combined really well, Probably one of our best matches of the year together. So ah yeah it’s a great way to finish.”

Sania and Cara could not have ended their partnership on a sweeter note. Sania teamed up with the veteran Cara Black in 2013.

Since then the pair had already won four titles, including two in Japan and one each in Portugal and China. They also reached the semi-finals of the US Open and of course ending 2014 by winning the World Tour final.

“It’s been incredible, it’s been a great ride. You never say never, but I’m just yeah taking one month at a time, seeing how I’m feeling, you know with my body and with everything. It’s been a great journey and just so pleased with the ending.” 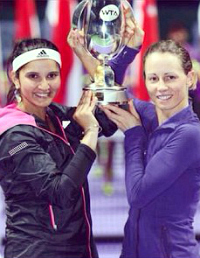 With this being the pairs last tournament together, Sania speaking about their partnership said: “I mean there are so many great things about it. I mean we’ve become really good friends now.”

“Now we become like a family. But also I got to learn so much from her. I mean she is such an experienced doubles player.”

“You know her little son, Lachlan, I mean we have become very close to him as well. So there are many things that I will miss, but more than anything I mean we had some amazing results together,” added the ace star from Hyderabad.

Sania Mirza has had a great year all round. She won the US Open Mixed Doubles title with Brazilian Bruno Soares and also the Asian Games Mixed Doubles Gold with fellow compatriot Saketh Myneni.

Reflecting on a successful 2014, Sania said:

“It’s been an incredible year, especially the last few months which have been such a world wind for me. It is an incredible feeling.”

With her short but successful partnership with Cara Black coming to an end, Sania will partner Su-Wei Hsieh in the next season.

Sania Mirza will relax a little before she participates in the International Premier Tennis League (IPTL), which takes place between 28 November and 13 December 2014.