No.1 Seeds, Sania Mirza (IND) and Cara Black (ZIM) lost in the semi-finals of the women’s doubles at the 2014 Aegon Classic Tennis tournament in Birmingham. They were beaten 3-6 6-3 10-8 by American pair of Raquel Kops-Jones and Abigail Spears.

“It was a tough match to play, to make that transition from clay to grass.”

Sania Mirza (IND) and her partner Cara Black (ZIM) frittered away a good start to lose the women’s doubles semi-finals at the Aegon Classic Tennis event in Birmingham on 14 June, 2014.

The top seeds fell 3-6 6-3 10-8 (tiebreak) to No. 3 seed American team of Raquel Kops-Jones and Abigail Spears. Kops-Jones and Spears went on to win the doubles tournament, lifting the trophy and winners cheque of $38,000

Known also as the Birmingham Classic, this tournament has been held each year at the Edgbaston Priory Club since 1982. Played on outdoor grass courts, the tournament is regarded as a warm up to Wimbledon. 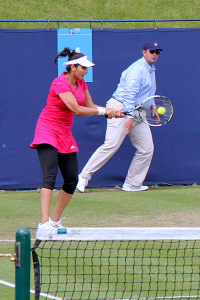 In 2014, the Birmingham Classic became even more special as it was awarded WTA Premier Status, attracting an even stronger line up of players.

This year, it was the 33rd edition of the event, taking place from 9 June to 15 June 2014. Appreciating the efforts of all and looking ahead to some exciting tennis, Cathie Sabin, President of the Lawn Tennis Association (LTA) said:

“A very warm welcome to the Aegon Classic. Thank you to everyone who works so hard to make this historic tournament such a success, and wish you a very pleasant day at the Edgbaston Priory Club.”

The doubles competition consisted of sixteen teams in 2014. Sania and Cara entered the tournament ranked No. 4 in the Doubles Leader board.

On a great British tennis weekend, all four players featuring in the women’s doubles semi-final were called in to play, following a few rain interruptions during the singles matches. 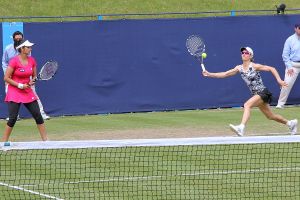 Fans for both sets of players were present at Centre Court, with members of the British Asian Community passionately cheering on their favourite, Sania Mirza.

After a short customary warm up, chair umpire, Julie Kjendlie called time and play as a cue to start the match.

The Indo-Zimbabwean team of Mirza and Black started brightly as they broke the Spears serve in the second game of the match. Cara held on to her serve without conceding a single point, as the higher ranked pair went into a 3-0 lead.

Kops-Jones and Spears failed to break back as Sania and Cara claimed the first set comfortably 6-3. The first set saw a combination of Mirza’s lethal forehand and Black’s delicate touches at the net. 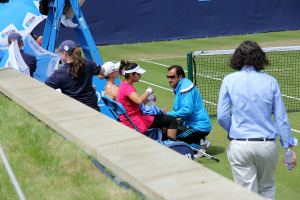 Sania and Cara carried the momentum early on in the second set. But in the 6th game, the American duo upped the tempo. With Mirza failing to get her first serves in, at 15-40 she served a double fault to give Kops-Jones and Spears a 4-2 lead.

By the end of the seventh game, Mirza’s travelling coach and father Imran had a quick tactical word with the pair.

But it did not quite have the desired effect. In the 9th game, at 30-30 Mirza failed to return serve as the Americans overpowered their opponents and won the second set 6-3.

The game went into a 10-point tiebreak to decide the fate of this match. In other words, either side had to reach 10 points with two points clear.

Even though Sania and Cara were a little on the back foot, they raced into a 5-0 lead in the tiebreaker. A few moments later, Mirza served another double fault as the deficit was reduced to 5-3. 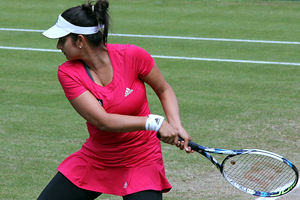 At 7-3, Mirza and Black looked like coasting to victory. But at 8-6 down, and on the brink of defeat, Kops-Jones and Spears fought back miraculously to claim a famous 3-6 6-3 10-8 win. During the final few exchanges, Cara in particular committed a few errors at the net, which cost her and Sania the match.

The game saw Mirza and Black waste numerous opportunities to consolidate and win the match. They only managed to convert one break point out of eight. Kops-Jones and Spears came back twice to win this thrilling battle.

In reply to a question about how she found the tournament and Birmingham, Sania exclusively told DESIblitz:

“I love coming back to Birmingham. The Indian and Pakistani community is so large here. We have a few friends here as well. I have always had good results here. The tournament has improved a lot over the last few years.”

Having arrived from the French Open, she added: “It was a tough match to play, to make that transition from clay to grass.”

Had they reached the final of the Aegon Classic, Sania Mirza and Cara Black could have moved up to No. 3 in the rankings.

Even though it was a disappointing loss for Sania and Cara, they hope to bounce back strongly for the 2014 Wimbledon Championships, which takes place from 23 June to 6 July, 2014. They have been seeded 4th at this years Wimbledon.

Raquel Kops-Jones and Abigail spears climbed up to No. 5 in the rankings having won the doubles title. They defeated last year’s winners, Casey Dellacqua (AUS) and Ashleigh Barty (AUS) 7-6 6-1.

In the grand finale, Anna Ivanovic (SRB) lifted the singles title, courtesy of a 6-3 6-2 win over Barbora Zahlavova Strycova (CZE).

Overall, the 2014 Aegon Classic has been a fantastic tournament, with fans getting to watch some entertaining tennis.

All images copyrighted by DESIblitz.com