"Sania and Casey can preserve their energy and look forward to some more grass court tournaments."

Top seed Sania Mirza from India kicked off her grass court season with a surprise defeat in the first round of the Aegon Classic WTA Premier event at the Edgbaston Priory Club in Birmingham on 18 June 2015.

Sania along with Australian doubles partner Casey Dellacqua slipped to a 6-4 6-2 loss against Yung-Jan Chan (Taipei) and Jie Zheng (China).

Their opponents Chan and Zheng had been runners-up at the 2015 Australian Open and were unseeded for this tournament.

This match played on court 3 got underway on 17 June 2015 under overcast conditions. The first set was a closely fought battle with both sides holding their serve early on. Chan and Zheng eventually broke serve and won the set 6-4. 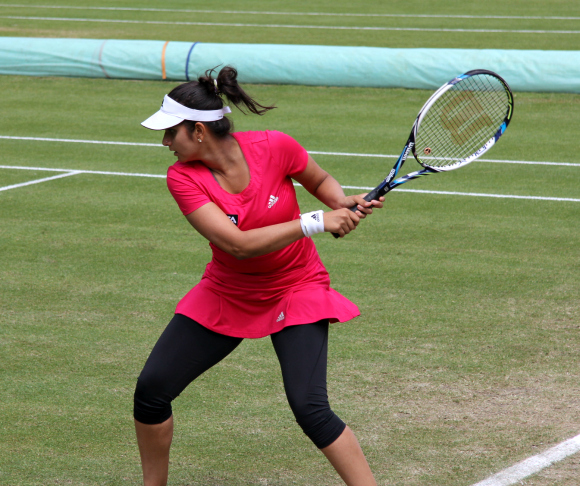 With rain pouring down in Birmingham, play was suspended following the completion of the first set. Play resumed on Thursday 18 June 2015.

In the second set, Yung-Jan and Jie managed to get an early break. At 2-3 down the Indo-Australian pair of Mirza and Dellacqua had a chance to break back at 30-40. But Chan and Zheng won two points in a row as they increased their lead to 4-2.

Sania and Casey lost their second consecutive game on serve to go 2-5 down. Chan and Zheng held their serve to win the final game and match 6-4 6-2 in 1 hour 10 minutes.

According to match statistics, Mirza and Dellacqua fell short on two accounts. Firstly they failed to convert any of their break points (0 of 4 = 0 per cent). Secondly they only managed to win 59 per cent points on their first serve as opposed to 76 per cent won by their opponents.

With this victory, Chan and Zheng have made it to the quarter-finals of the Aegon Classic Birmingham tournament.

Sania and Casey can preserve their energy and look forward to some more grass court tournaments.

Sania Mirza in particular will be hoping to improve on her performance at Wimbledon as she is expected to team up with regular partner Martina Hingis.

Faisal has creative experience in the fusion of media and communication and research which increase awareness of global issues in post-conflict, emerging and democratic societies. His life motto is: "persevere, for success is near..."
Caribbean Premier League T20 Cricket 2015
Force India driver makes history with Le Mans win