Playing It My Way by Sachin Tendulkar

“This is an absolutely outstanding book and will delight every cricketing fan."

The host for the evening was Indian cricket commentator and journalist Harsha Bhogle. In amongst the crowd were his former team mates, ex cricketers, mother Rajni, brother Ajit and wife Anjali.

Sachin who unveiled the book himself, received a standing ovation from everyone at the glittering ceremony. Earlier in the day, Tendulkar gave the first copy of the book to his mother Rajni.

In the presence of his daughter Sara, Sachin presented the second copy to his childhood coach and mentor Ramakant Achrekar. 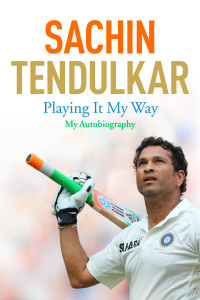 Co-Author of the book, Boria Majumba also attended the gala event. Describing the book as a ‘three—and a half years long pregnancy,’ Majumba said:

“It’s taken three years. For me when it started, there were two fundamental challenges. Sachin’s life is a public book. Can we tell the audience something new and can we give his voice.”

Prior to the launch of the book, Tendulkar participated in a Q and A session with Bhogle. In this Rendezvous, Tendulkar shared his thoughts about the most eagerly awaited sports book of 2014.

In a special reunion of the Fab Four, Rahul Dravid, Sourav Ganguly and VVS Laxman also took centre stage to share some candid moments with the Master Blaster.

The senior legends reminisced their experiences with Tendulkar. Speaking about the early talent and innocence of the Little Master, Vengsarkar said:

“We picked a 15-year-old Tendulkar after being mightily impressed with him, but he didn’t come for practice for the first three days. On the fourth day, we asked him what happened? He replied. Sir, I had a drawing exam.”

During a discussion amongst the Class of 1996 (Fab Four), Ganguly had the crowd in stitches as he told some jokes about Sachin’s sleepwalking.

In his autobiography, Tendulkar reveals the time when former Indian coach Greg Chappell visited his house and tried to persuade him about taking over the captaincy from Rahul Dravid. These claims have been categorically denied by Chappell even now.

Tendulkar is quoted in the book saying: “I was surprised to hear the coach not showing the slightest amount of respect for the captain, with cricket’s biggest tournament (2007 World Cup) just months away.”

Tendulkar also disclosed the challenges that came his way while he was captain of the team.

Sachin in particular did not agree with the Indian selectors when it came down to team composition. He also felt his team were not scoring enough runs abroad against South Africa and Australia.

Tendulkar said playing the Aussies hit him hard, as the Indian team failed to surpass 300 in each of the six innings against them. 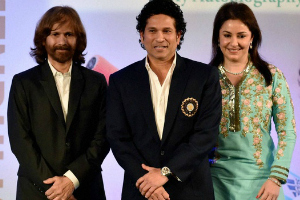 Writing on food matters, Tendulkar talks about how his first encounter with Chinese food did not go really well. After having a couple of spoons of Sweet Corn Chicken Soup and a few grains of rice, Sachin was still hungry.

Telling his food story in the book, Sachin says:

“I came back starving and said I want to eat and everybody said you went out for Chinese meal and we thought that it would be an enjoyable experience, what happened to that? I said, I’ll tell you later because the older guys have said that don’t tell anyone, just keep quiet. ”

On India’s tour to South Africa in 2001, Tendulkar got caught in a bout of controversy. Sachin was in a state of shock after being accused of ball tampering by a match official.

“I had a very difficult time when referee Mike Denness alleged that I had been involved in ball tampering. I was shocked because I had always played cricket with integrity and honesty and would never do such a thing,” Tendulkar writes in the book.

Tendulkar’s most memorable moment of his career was winning the World Cup in 2011. Reporting the win as a “fantastic experience,” he recalls how a superstitious Anjali rushed to the stadium after watching the match on television.

The husband and wife later on celebrated the victory with some champagne and loud music.

And of course the book would be incomplete without mentioning the rivalry between India and Pakistan. On his very first tour to Pakistan, Tendulkar writes of how he was bombarded with a number bouncers from the Sultan of Swing, Wasim Akram:

“While I kept expecting a fiery yorker, balls five and six also turned out to be bouncers, and at the end of the over I said to myself, ‘Welcome to Test Cricket’.”

There are so many heart warming stories in the autobiography as Tendulkar talks about his life before cricket, his passion for tennis and his wonderful experiences on and off the field.

Hodder and Stoughton (International) and Hachette India (Subcontinent) are the official publishers of the book.

Thomas Abraham, Managing Director of Hachette India summarised the book stating: “This is an absolutely outstanding book and will delight every cricketing fan.”

“We are delighted to welcome Sachin Tendulkar to our list and are proud to be publishing this landmark autobiography which we’re sure like its author will go on to set new records.”

Playing It My Way is available on Kindle, Hardback and Paperback. The book can be purchased online and from all major book stores worldwide.

Sid is a passionate about Sports, Music and TV. He eats, lives and breathes football. He loves spending time with his family which include 3 boys. His motto is "Follow your heart and live the dream."
Pakistan beat Australia in 2014 Cricket Test Series
Isa Guha the Inspirational Cricketer