Australia demolished Netherlands 6-1 in the final of the Men’s Hockey World Cup 2014 in The Hague. The Indian men’s hockey team finished in a disappointing 9th place. Netherlands won the 13th edition of the women’s tournament after a 2-0 victory over Australia in the final.

"The boys played really well, I was just lucky to be at the end of it, finishing it."

Australia thrashed Netherlands 6-1 to win the Men’s Hockey World Cup final played at the Kyocera Stadium in The Hague on 15 June, 2014.

England finished in fourth place in the men’s World Cup after a 2-0 defeat to Argentina in the 3rd place play-off match. The Indian men’s hockey team sealed a disappointing 9th place after a 3-0 win over South Korea.

Hosts, Netherlands clinched a record seventh women’s world title with 2-0 win versus Australia at The Hague on 14 June, 2014. The Argentinian women’s team won a Bronze medal after a 2-1 victory against USA. 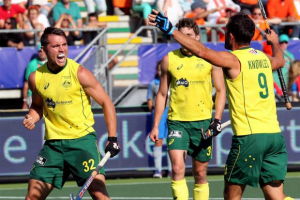 Willem-Alexander, King of the Netherlands was at the men’s final to support the host nation. In a repeat of the women’s final, the King was hoping to witness another Dutch victory.

Netherlands took the lead in the 14th minute as Jeroen Hertzberger showed some great skill before slotting the ball low past the Australian goalkeeper.

Australia went level six minutes later as Chris Ciriello got the first of his three goals from a penalty corner. Kieran Govers put Australia ahead in the 24th minute after hitting a cracking reverse hit shot.

In the second half, the defending champions moved further in front with a goal from Glenn Turner. Two penalty corner strikes by Ciriello made it 5-1 to Australia.

In the 64th minute, Jamie Dwyer made it six for Australia to complete a fine victory as the Men Down Under became only the third side to retain the trophy in the history of the sport. Australia lifted the Men’s Hockey World Cup for a third time.

Completing a hat-trick in the final and being the tournament’s top scorer, a jubilant Chris Ciriello said: 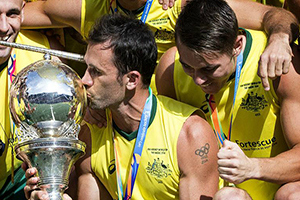 “The boys played really well, I was just lucky to be at the end of it, finishing it. Our strikers worked really hard, and it’s not just happened for my team, but for Australia as well.”

The English men’s hockey team lost their third place play-off match against Argentina 2-0. There were no goals in the first half, but England goalkeeper, George Pinner made some good saves, including one from Guido Barreiros.

Argentina did eventually take the lead in the 55th minute as Matías Paredes put The Lions ahead. A minute later Paredes gave Argentina a 2-0 victory and a Bronze medal for the first time in the men’s game.

Sébastien Dockier earned the goal of the tournament on the final day after hitting a stunning shot in Belgium’s 4-2 triumph over Germany. With this win, Belgium finished fifth place overall in the tournament.

Akashdeep Singh scored twice as India beat South Korea 3-0 to finish a poor 9th in the Men’s Hockey World Cup. Team India have failed yet again, showing no signs of improvement at the world stage. 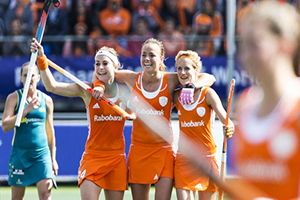 In the women’s tournament, Netherlands added another World Cup to their three Olympic medals with victory over Australia at The Hague. They beat Australia 2-0 in their fifth straight appearance in the final.

The two sides met last week in the group stages ending with a 2-0 win for the Dutch. But the big question was could Netherlands repeat the result in front of 15,000 home fans.

Netherlands began with a dangerous strike from Ellen Hoog, forcing Australian goalkeeper, Rachel Lynch to palm the ball away.

Almost immediately the Australians came back with a cross in from Emily Hurtz as Dutch goalie, Joyce Sombroek scrambled to clear it.

In the 12th minute of the game a pass into Dutch player Roos Drost saw her clear on goal, but an Australian defender committed a foul in the circle to award Netherlands a penalty flick.

Captain, Maartje Paumen converted the penalty as she calmy slotted the ball in the top left corner to give Netherlands a 1-0 lead.

Then the Netherlands showed why they were ranked No. 1 in the world. Taking the ball from their back line all the way to the Australian D, before Netherlands Kim Lammers scored a goal in her last International game.

Australia might have got one back, but failed to capitalise on two penalty corners. With the match finishing 2-0 to Netherlands, there were tears of joy as the European side won the World Cup for a record seventh time.

Delighted to bow out on a winning note, Kim Lammers said:

“I only could dream of this. I have to say a massive thank you to the team, we stayed focussed and took our chances when they came. I’m so proud, to win in a home stadium and on my 200th cap, it’s amazing.”

The Argentinian women’s team who won Gold when they hosted the tournament four years ago had to settle for a Bronze medal after defeating USA 2-1 in the third place play-off match.

Captain, Luciana Aymar scored both of their goals against the Americans. The first goal came in the 8th minute. Three minutes later the USA were level as captain Lauren Crandall got the final touch off a penalty corner.

Argentina went into the interval in the lead, courtesy of a second goal from Aymar.

USA pushed for an equaliser in the second half, but were denied a second by Argentinian goalkeeper Florencia Mutio.

Dutch playmaker, Kim Lammers won the award for goal of the tournament, which came against New Zealand during the group stages. Ellen Hoog also from the Netherlands received the player of the tournament award.

Netherlands keep dominating the women’s game, whilst in the men’s tournament Australia are creeping closer to Pakistan’s record of four World Cup wins.