“We lost the finals last year and this time we were filled with fire and the urge to win."

Delhi Waveriders defeated Punjab Warriors 3-1 on penalties to win the 2014 Hockey India League title. Ranchi Rhinos beat UP (Uttar Pradesh) Wizards 3-2 also in a shoot out after being 1-1 at full time.

Both matches were played in front of a packed crowd at the Astroturf Hockey Stadium in Ranchi on 23rd February, 2014. 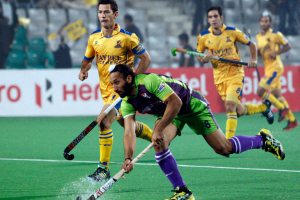 Going into the competition, Delhi Waveriders were always one of the favourites in the Hockey India League, having made it to last years final.

Led by a new coach in Cedric D’Souza and a new owner in Bollywood actor John Abraham, the team went one better this year.

With the teams tied 3-3 after 70 minutes, it took a penalty shoot out to decide who would be crowned champions of the Hockey India League in its second year. And after four strokes each, it was Delhi Waveriders who clinched the title 6-4 (aggregate) on penalties.

Punjab Warriors grabbed the lead in the final with Australian Mark Knowles scoring the fastest goal of the tournament on two minutes. Two goals in two minutes by Norris Jones (33’) and Sardar Singh (35+’) then gave Delhi a 2-1 lead in a very closely fought game. 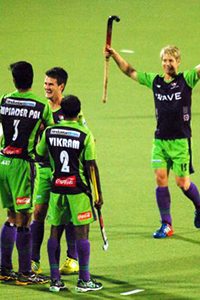 But the Warriors battled back scoring two goals (Shivendra Singh 45’, Affan Yousuf 48’) in three minutes to regain the lead. And with nineteen minutes left before full time, last years finalists, Delhi made it 3-3 through a goal from Yuvraj Valmiki to take the game into a penalty shoot out.

The hero of the match turned out to be goalkeeper Nicolas Jacobi of Germany who saved three out of the four penalties to give Delhi Waveriders their first Hockey India League title.

Jacobi incidentally was the number 1 ranked goalkeeper of the tournament, having three clean sheets. He was also adjudged man of the match in the final.

Team co-owner and brand ambassador John Abraham was clearly pleased that his latest venture ended as a super hit. He expressed his delight on twitter saying: “We are Champions!!! Awesomeness !!! proud owner of champions Delhi Wave Riders.”

Abraham uploaded images of him and his team-mates with the trophy on social media networks, celebrating this big win.

Actor Abhishek Bachchan, congratulated his co-star of Dostana (2008) tweeting: “Many congratulations to my friend @TheJohnAbraham and his team. Well done! #champions, (sic).”

Besides lifting the trophy, Delhi received a cash prize of 2.4 crore rupees, whilst the runners up collected a sum of 1.25 crore rupees. 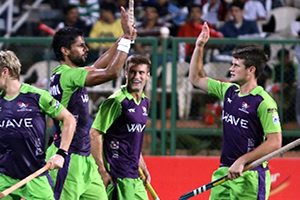 Delhi captained by Sardar Singh, post match said: “A very close match today. For us it was to go all out but also keep our patience in place. We will enjoy the win and gear up for the next tournament.”

Jamie Dwyer, losing captain of Punjab Warriors said: “When you lose a game in short arm it’s rather not very disappointing. It was a great game and we played well and gave our best shot.”

Inspired from last years defeat, Cedric D’Souza, Head Coach of Delhi Waveriders said: “We lost the finals last year and this time we were filled with fire and the urge to win. We had a hard match today, but we planned and executed our strategy well today. It is time to enjoy the victory.”

Speaking to the media, Barry Dancer, Head Coach of Punjab Warriors said: “The team played very well today and we dominated the match for a long period of time. We somehow were not as aggressive as the opponents today. Though this was the best game of the tournament and I am proud of this team.” 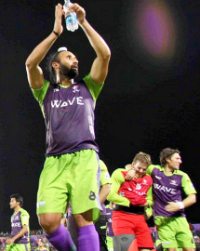 Earlier in the day, UP wizards captain V.R. Raghunath broke the deadlock during the first quarter of their bronze medal match versus Ranchi Rhinos. A perfect penalty corner in the 15th minute gave the team from Lucknow a 1-0 lead.

In the 2nd quarter, Manpreet Singh had Ranchi draw level following an individual effort, as the Rhinos were back in the game.

It came down to a penalty shoot out before the Rhinos managed to give their fans something to cheer about. They won the game by the skin of their teeth 3-2 to finish 3rd in the tournament.

As expected, the 2014 Hockey India League positively changed the dynamics of the game in the country.  It also gave many youngsters a chance to showcase their talents, playing alongside some of the great names from World Hockey.

The league has truly embraced an era of professionalism, with yet another organised event. This years tournament commenced on 25 January, 2014, introducing one new franchise, Kalinga Lancers.

Faisal has creative experience in the fusion of media and communication and research which increase awareness of global issues in post-conflict, emerging and democratic societies. His life motto is: "persevere, for success is near..."
Sochi Winter Olympics Closing Ceremony 2014
Suz Member set for Pro Boxing Debut