The fourth season of Hockey India League (HIL) has begun for 2016. DESIblitz has rounded up the events of each fixture in the last seven days of proceedings.

The fourth season of the Hockey India League (HIL) got underway this week and it was an eventful start to proceedings.

The DESIblitz roundup shall feature summaries of each of the fixtures played this week.

For those new to the tournament fear not, DESIblitz informs you on what you need to know about the HLI and what changes have been made for 2016’s iteration.

What you need to know about the HIL?

The tournament adopts the template of the IPL where franchised teams compete in an annual series; this instalment runs from January 18 to February 21, 2016.

The squads are comprised of 20 players; 12 of Indian heritage and 8 international athletes.

34 matches will take place with daily fixtures taking place at 1800 IST and after the round robin the top four teams progress into the semi-finals.

The total pot is Rs 5.70 crore with the winners receiving Rs 2.5 crore, runners-up will collect Rs 1.75 crore and third-place will acquire Rs. 75 lakh.

New Rule for this season:

The tournament organisers have announced a pilot project for this year.

The weightage for field goals will be double compared to the goals scored from penalty corners, meaning a field goal will count as two whilst a converted short corner will still be considered as one goal. 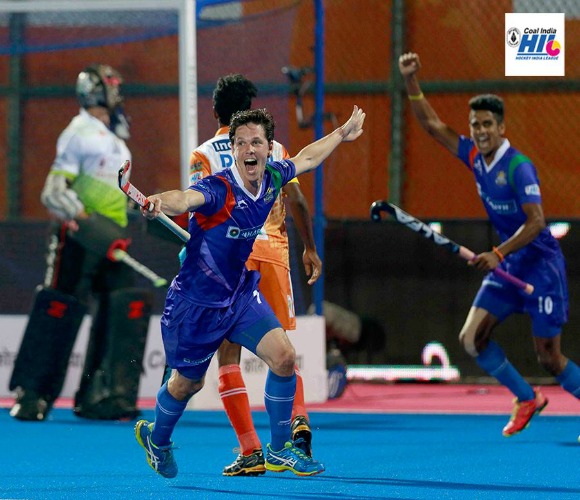 Fans witnessed a scintillating league opener with both teams demonstrating brilliant attacking displays; it was the perfect way to kick of HIL 2016.

Despite the double whammy the home team managed to get one back via a counter attacking field goal finished off by Pradeep Mor; at the end of the first quarter the home team still trailed by two points.

The Lancers entered the second quarter with a new lease of life as Glenn Turner converted yet another field goal in the 29th minute to level the match at 4-4.

Then, after a period of sustained pressure from the home side, Turner struck again in the 37th minute handing the home team the lead for the first time in the match (6-4).

The third quarter was largely a stalemate with no goals being scored but it was in the fourth where nails were bitten, floors were paced on and comfort food was consumed; a truly tense end to proceedings.

The Lancers levelled the match to 6-6 through a field goal by another Aussie in the form of Edward Ockenden. A draw would have been a fair result for a match where both teams put in a hell of a shift but this was not to be the case.

In the dying embers of added time Akashdeep Singh struck the final field goal of the match for the Wizards, awarding a tremendous opening win for the visitors and a crushing loss for the Lancers.

The match was a perfect advertisement for the 4th edition of Hockey League India and for the sport itself. 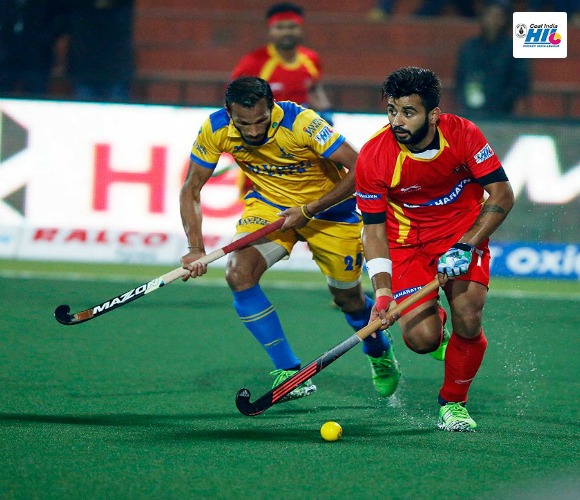 The second match of the tournament saw the Punjab Warriors hand an early defeated to the defending champions.

The home side lost last year’s final to the Ranchi Rays so this victory early on in the season would have been just that little bit more sweet.

The Warriors started brightly and their urgency was rewarded with an early field goal courtesy of Jake Whetton in the 2nd minute.

The Rays had more possession throughout the match but couldn’t utilise it; they played very defensively until the final few minutes where both teams went on the attack.

However, neither could add to the score line resulting in an early win for the Punjab Warriors in 2016. 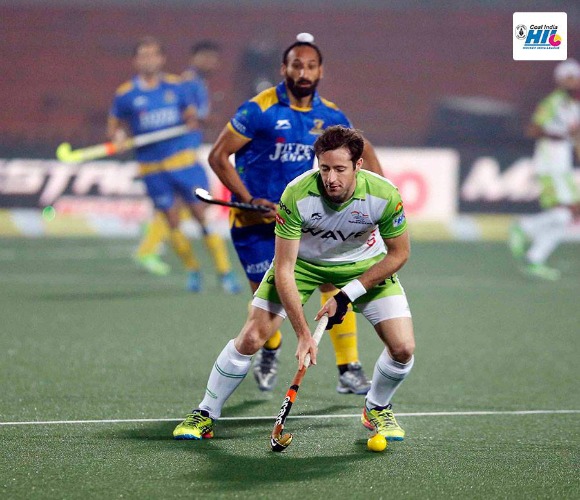 In what was their second match in consecutive days, the Punjab Warriors could not prevent the Delhi Waveriders from clinching a great away win.

Unlike the previous day’s fixture which was very defensive for long periods; fans witnessed a much more attacking exhibition in the third game of the tournament.

The visitors struck first as Yuvraj Walmiki’s field goal gave the Waveriders a 2-0 lead in the 9th minute. However, the lead was extremely short lived as Matt Ghodes equalised in the very next minute.

The deadlock wasn’t broken until the 24th minute when Rupinder Pal Singh converted a penalty corner making it 3-2 to the Waveriders; the first single point goal of the tournament.

After some sustained pressure the visitors scored another penalty a few minutes later; this time Mark Pearson finding the goal (2-4).

The home side managed to get one back via a penalty of their own, scored by Christopher Ciriello in the 29th minute poising the match nicely at 3-4.

The second half saw the Waveriders’ Rupinder Pal Singh score, yet another penalty corner via stretching their lead to 5-3.

Despite the best efforts of the Punjab Warriors to rescue the game they failed to do so; the home side did score another penalty in the 54th minute but it was not enough to prevent the defeat. 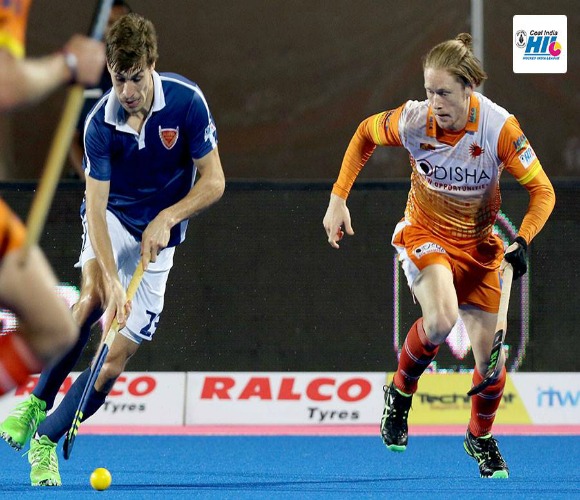 The Lancers, captained by world player of the year Moritz Furste, came from behind to secure victory through two exceptional field goals courtesy of Glen Turner and Adam Dixon.

The first two quarters were goalless and it wasn’t until the 35th minute when Dabang’s Florian Fuchs gave the visitors the lead. Turner and Dixon struck in the 45th and 51st minute respectively to -complete the comeback. The Lancers held on for the win. 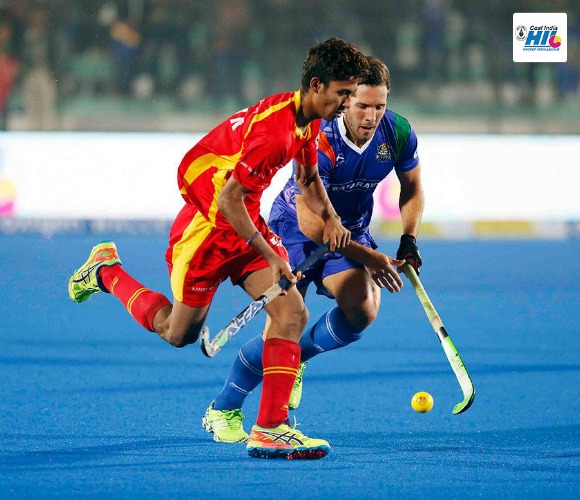 Defending champs Ranchi Rays bounced back from their early league defeat to attain their first win of the season.

The home side open the scoring through a fantastic first goal in the 4th minute by Ramandeep Singh and a string of saves from Wizard’s Keeper PR Sreejesh maintained the 2-0 lead for the first half.

The fourth quarter featured some exceptional hockey. A brilliant field goal by Rays captain Ashley Jackson gave the away side a crucial two points and he converted a penalty soon after in what was a tremendous individual effort ending the match at 2-4. 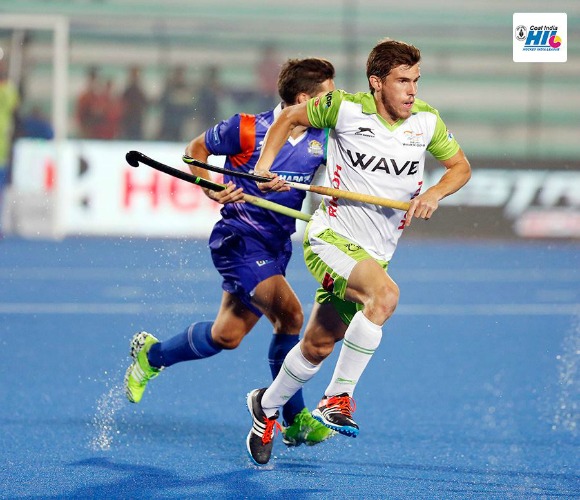 The Delhi Waveriders topped the league after defeating the Uttar Pradesh wizards in game six of the tournament.

It was the home side that dominated the early proceedings with more possession and better chances created but, after the first half, the match remained goalless.

The Waveriders looked solid at the back and began to press up in the third quarter; their attacking switch was rewarded with a penalty conversion in the 4nd minute by Rupinder Pal Singh. Delhi extended their lead in the fourth quarter through a Steven Edwards field goal making it 3-0.

The Wizard’s faced a monumental task from then on and, despite Gonzalo Peillat scoring off a penalty corner the match ended 1-3.

It has certainly been an exciting week for hockey. Stay tuned to DESIblitz for weekly roundups of Hockey India League 2016.