Week 2 of the Hockey India League 2016 was just as captivating as Week 1. DESIblitz rounds up the best moments from the action-packed fixtures.

The excitement hasn’t let up in Week 2 of the Hockey India League (HIL) 2016, with wins from Jaypee Punjab Warriors, Kalinga Lancers and Ranchi Rays.

Each hockey match in the HIL was a fiercely fought affair with entertainment in abundance.

DESIblitz has all the highlights from the last 7 days. 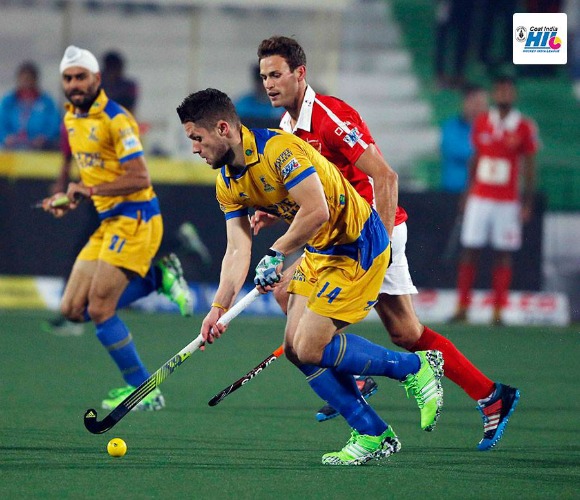 The Warriors secured their second home win of the season; a victory that propelled them to the top of the league with 11 points.

After a few opening exchanges it was the home team who broke the deadlock.

Armaan Qureshi’s touch was exquisite as he took control of a perfectly weighted pass into the D before calmly finishing. The field goal handed the hosts a 2-0 lead in the 9th minute.

In the second quarter, a penalty corner for the hosts saw Christopher Ciriello convert with a thunderbolt of a drag flick into the top right hand corner of the goal making it 3-0 to Punjab.

In Q3, Dabang Mumbai finally managed to get a point back through a penalty corner of their own in the 39th minute, with Harmanpreet Singh making it on to the scoresheet.

A more open match ensued thereafter but both teams failed to convert a slew of chances and the score line remained 3-1. 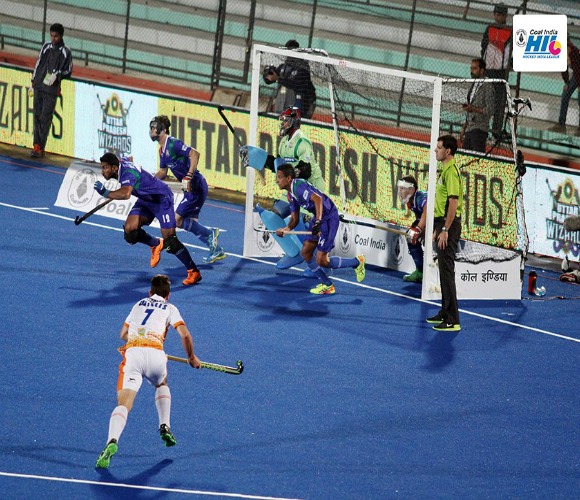 In what was the biggest thrashing of the tournament so far, the Kalinga Lancers recorded a very memorable away victory against the UP Wizards.

The Wizards started brightly creating a multitude of chances and were rewarded when they won a Penalty in the 14th minute; it was coolly dispatched by Gonzalo Peillat giving the Wizards a 2-0 lead.

The home team continued where they left off in the second quarter but in the 20th minute, a field goal from Aran Zalewski levelled the tie.

Both teams missed a penalty corner a piece before Glen Turner was expertly positioned to poach his eighth field goal of the season in the 43rd minute.

This was quickly followed by another field goal two minutes later from Lalit Upadhyay who atoned for an earlier miss and gave the Lancers a 6-2 lead.

The Wizards failed to recover from the field goal double whammy allowing the Lancers to run riot.

A rush of blood saw the UPW’s keeper bundle into the back of Moritz Fürste giving away a penalty. This allowed Glen Turner to add to his tally, 8-2.

The home team defensively capitulated for the final field goal of the match.

The Lancers expertly dragged the Wizard’s defensive line left and right before Dharamvir Singh found some space and struck the nail in the coffin on the 60th minute mark.

The score line is probably slightly flattering to the Lancers as the UPW created a lot of good chances, especially in the first half, but the second half performance was truly exceptional from the away side.

It just shows how efficient teams must be with their chance conversion otherwise teams will add insult to injury. The match ended 2-10. 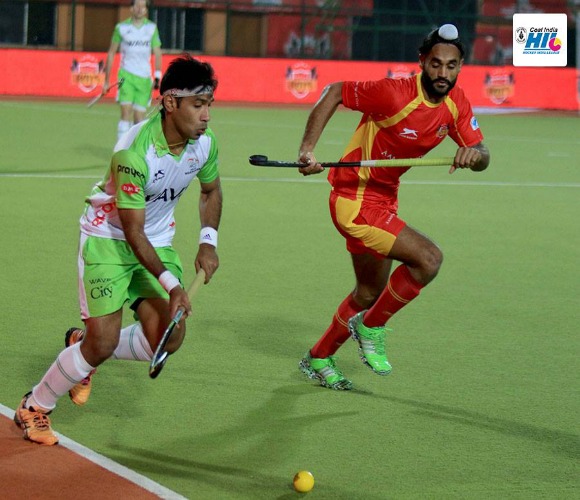 The Rays secured their first home victory of the season against the Delhi Waveriders in match nine of the competition, in what was a hard fought affair.

The first quarter was a very cagey period of play with both team’s defences coming out on top.

It wasn’t until the last few minutes of Q2 when Delhi won a penalty corner, sharply finished by Rupinder Pal Singh, which finally put a point on the scoreboard.

The Rays then won a penalty corner of their own; their third of the match, and third time was the charm as Captain Ashley Jackson fired home in the 29th minute levelling proceedings.

Yet another penalty corner was the deciding factor of the result in the 31st minute (Q3). Ashley Jackson doubled his tally and giving Ranchi the lead through a powerful drag flick.

Both teams went to create a plethora of chances but neither managed to convert. This was arguably the most hard fought match of the tournament. The match ended 2-1. 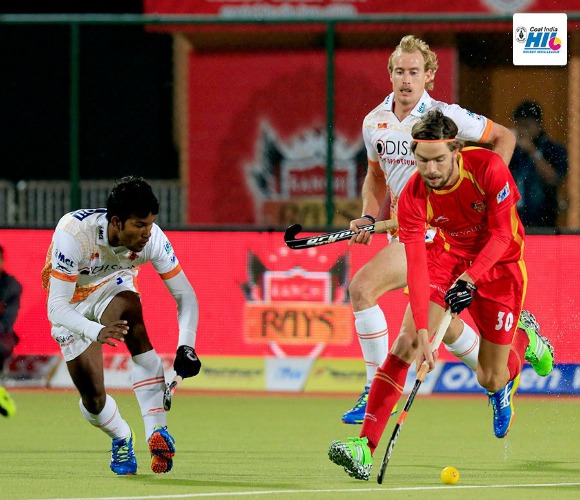 It was Ranchi Rays who came away with 5 points in one of the most anticipated matches of the tournament, the Eastern Derby against the Kalinga Lancers.

It was high intensity hockey from the off with high tempo, hard tackling and end to end chances. However, the deadlock wasn’t broken until Q3 but it was well worth the wait.

Malak Singh showed some incredible improvisation as he instinctively struck an aerial ball into the back of the net, the visitors led 0-2.

The Rays were attacking relentlessly and their positive play was rewarded when they won a penalty corner in the 39th minute which Ashley Jackson reliably dispatched.

This was his third penalty corner conversion in the space of two days. This meant the match was nicely poised at 1-2.

A terrible pass from a Lancer defender handed a field goal to the Rays on a silver platter.

Timothy Deavin pounced on a rebound to give the home team the lead for the first time in the match (3-2).

The win catapulted the Ranchi Rays to the top of the table leaving the Lancers biting at their heels in second place. 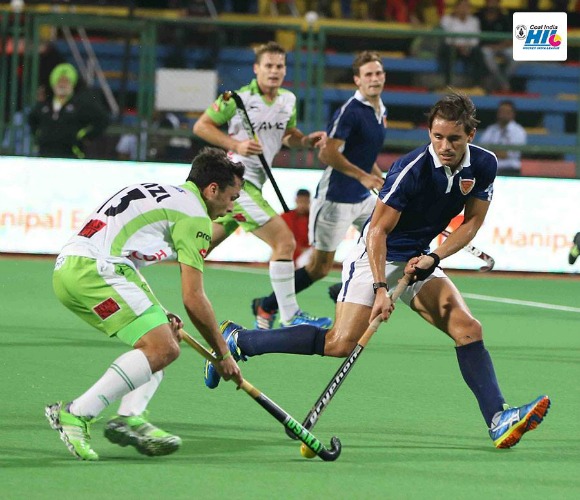 Dabang Mumbai were condemned to a third defeat of the season by the Delhi Waveriders leaving the home side winless thus far in 2016.

A penalty corner for the Delhi Waveriders saw, drag flick specialist, Rupinder Pal Singh rifle the ball into the net to earn his team the first point on the scoreboard.

Mumbai responded when Florian Fuchs latched onto a deflected pass, surged into the D and clinically finished for a two point field goal gifting the home side a 2-1 lead.

The score was unaltered until the third quarter when Rupinder Pal Singh scored another penalty corner; precision and pace yet again prevailed. 2-2.

Harmanpreet Singh stepped up to make it 3-2 to the home side after Mumbai were awarded a penalty but that lead was short lived as the Waveriders quickly struck back.

Talwinder Singh nicely controlled a cross into the D before lashing home a goal bound shot; that field goal made it 3-4. A valiant effort and great win for the visitors. 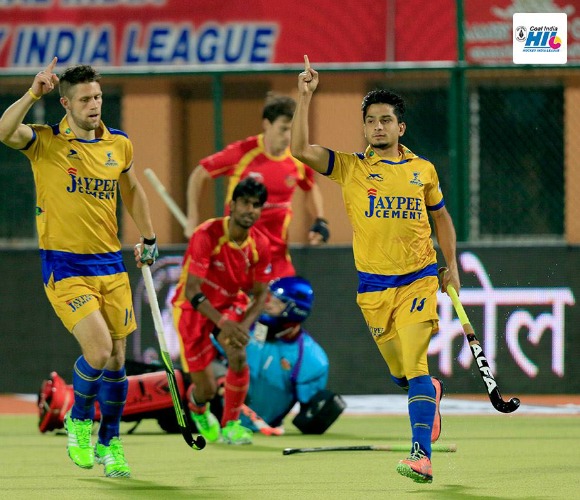 The Rays achieved their third consecutive home victory against the Punjab Warriors.

The Warriors beat them in their very first match of the tournament so a nice bit of revenge for the home side.

The JPW opened the scoring through Armaan Qureshi who skilfully weaved the ball past two defenders in the D before smartly finishing; the field goal meant a 0-2 score line.

The Ranchi Rays hit back in Q2; A ball to the back post was nicely turned in for a field goal, levelling the match.

They then doubled their lead as Daniel Beale found acres of space in the D, the defenders were caught napping, allowing the player to calmly finish a field goal opportunity. At half time the score was 4-2.

It was then the Warrior’s turn to equalise. A flat drive from the wing forced the keeper into a save; the ball then fell right into the path of Satbir Singh making it 4-4.

He scored his first drag flick of the tournament off a penalty corner condemning the JPW’s to a loss. 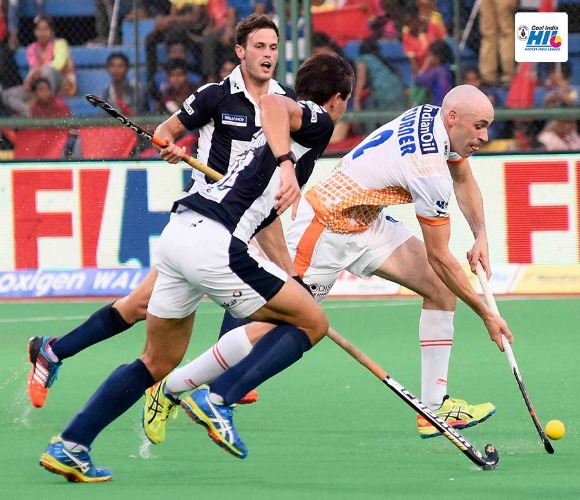 Dabang Mumbai are still without a win in this year’s competition. Four losses out of four leaves them rock bottom in the hockey league table.

The lancers opened the scoring in Q2; a very well worked penalty corner allowed Gurjinder Singh to hand the visitors a 1-0 lead.

Soon after, another penalty corner was deflected by Adam Dixon doubling the visitor’s lead.

Three minutes into the third quarter Lalit Upadhyay finished off the most exquisite team goal of 2016 so far.

A string of inch perfect passes and lay offs handed Upadhyay one of the easiest field goals he’ll ever score. 0-4.

Mumbai finally strike back through their talisman Florian Fuchs in the 41st minute. The German into the D and struck at a stretch to make it 2-4.

The home team drew level at the beginning of the fourth quarter. Some poor defending from the Lancers gifted Gurjant Singh a field goal.

The away side really should have easily dealt with the relatively slow paced cross from the right hand side.

Mumbai had, virtually an open hockey goal but they failed to convert and they were punished.

Moments later, Moritz Fuerste’s incredible pass found an unmarked Quirijn Caspers who was one on one with the keeper and made no mistake under pressure.

It was a deserved 6-4 win for the Kalinga Lancers catapulting them to 2nd in the hockey league.

It has been another thrilling week for hockey. The tournament is really making a great case for the two point field goal rule to be adopted worldwide.