The third week of the Hockey India League 2016 was a memorable one with outcomes nobody would have called and some spectacular goals.

In week three of the Hockey India League 2016, Dabang Mumbai were still winless having accumulated a miserable looking tally of 4 points.

Contrastingly, the Ranchi Rays were riding high at the top of the league after a quadrat of successive victories.

Here are all the highlights of the last 7 days. 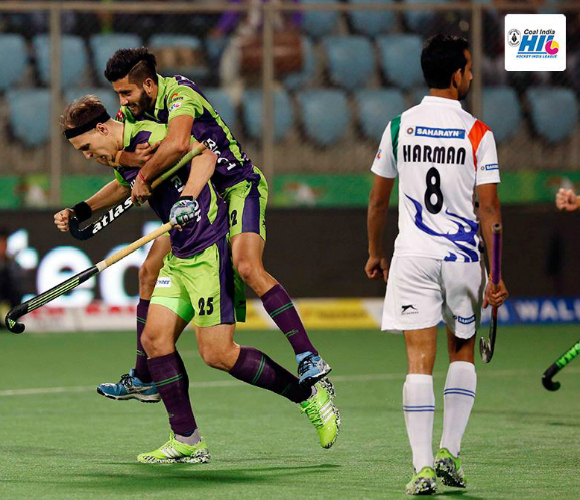 After three losses on the bounce the UPW’s secured a much needed win against the Delhi Waveriders.

The deadlock wasn’t broken until the second quarter when the Wizard’s won a penalty corner in the 19th minute.

VR Raghunath confidently drove the ball into the goal with a powerful drag flick straight down the line giving the visitors a one point lead.

The score line was still unchanged at the end of Q3 meaning the final quarter-hour of proceedings was quite a show. In fact all the action occurred in the final seven minutes of the match.

A quick counterattack from the Wizard’s in the 54th minute resulted in one of the best goals of the tournament thus far.

Chinglensana Singh unleashed an almighty tomahawk from the left side of the D that flew into the top right corner.

The keeper had absolutely no chance of stopping that effort which put the away side at a comfortable 0-3.

Another goal followed a minute later. The Wizards advanced down the right hand side through Akashdeep who played the ball into Jamie Dwyer.

The fast and furious format of these Indian franchised sporting tournaments makes anything possible.

Within the D, Dwyer turned and hit the ball on the reverse which resulted in another field goal and a surely unassailable 0-5 lead for the Wizards.

With just five minutes remaining Delhi finally pull one back. Justin Reid-Ross finding some space beside the penalty spot and firing home making it 2-5.

Any chances of a famous comeback were significantly diminished as the Waverider’s Tristan White was sent off after an altercation with PR Sreejesh on the opposing team.

With three minutes remaining the UPW’s cemented victory with a penalty corner, scored by Gonzalo Peillat. 2-6.

Less than two minutes remained and Delhi showed no signs of giving up. Talvinder Singh guided home a pacey cross from the left hand bi-line setting up a breath taking finish at 4-6.

However, after nine points in the last quarter the Wizard’s managed to hold on for the win.

Both goalkeepers must be praised; they respectively made a slew of saves from penalty corners and open play throughout the entire sixty minutes. 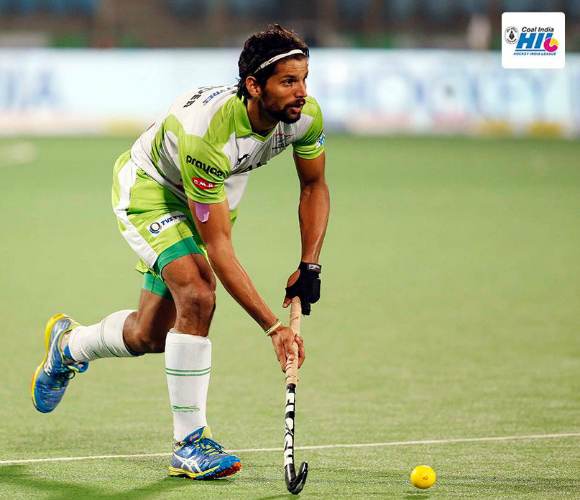 The Delhi Waveriders failed to bounce back and suffered a second successive home defeat in as many days.

The Warriors drew first blood via a penalty corner in the 10th minute. Mark Gleghorne gave the away side an early 0-1 lead.

Another penalty corner was awarded to the warriors a minute later. The Drag flicker, Jasjeet, hit the post but Mark Knowles was on hand for the rebound. 0-2.

The away side completed a hat-trick of penalty corners in the 22nd minute. Christopher Ciriello made no mistake handing the visitors a tidy 0-3 lead at half time.

The home side won a penalty corner of their own in Q3. Rupinder Pal Singh reliably converting for Delhi making it 1-3.

However, the Warriors quickly responded with a field goal in the 37th minute. The ball was fire in from the right wing and was deflected in by Jake Whetton taking the score to 1-5. A snakecharmer celebration resulted.

Delhi’s Rupinder Pal Singh scored another penalty corner but that’s all she wrote. The match ended at 2-5. 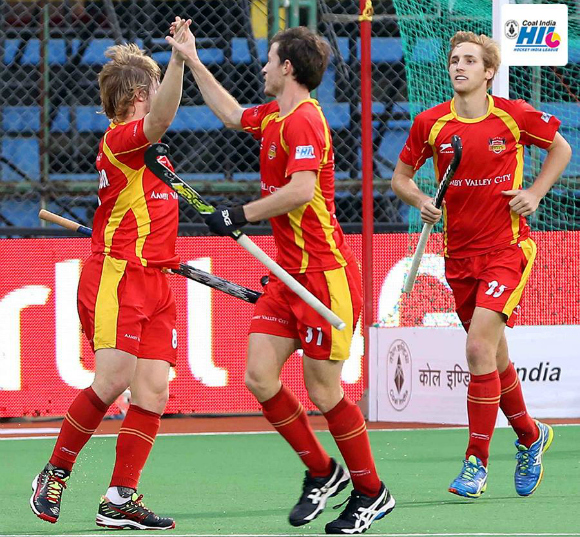 Who could have possibly foreseen this? Down and out Dabang Mumbai defeating the league leaders Ranchi Rays; this is one of the most unexpected results this season.

It was the home side that broke the deadlock in the 11th minute of the match. A well choreographed penalty corner was rounded off by Ram Diwakar handing Dabang Mumbai a 1-0 lead.

The league leaders responded with a penalty corner of their own in the third minute of Q2. Captain, Ashley Jackson, netted his 7th goal of the campaign via a deflection. 1-1.

Three minutes later Mumbai took the lead once more. This time the home side skipper, Mathew Swann, was perfectly positioned to put the finishing touch on a low angled cross from the left bi-line. That put the home side at a 3-1 advantage.

The Rays responded yet again. In the 38th minute the score was levelled to 3-3 after Sarvanjit pouncing on a pass into the D and firing into the right side of the goal.

Ashley Jackson converted his second penalty corner of the match in the 41st minute handing the Rays the lead for the first time in the match. 3-4.

In Q4 another Dabang counter attack proved to be lethal one more. Florian Fuchs was forced into sliding along the pitch in order to get the vital touch that directed the ball goal wards. 7-4.

The Rays converted their third penalty corner with under two minutes remaining. This tim, Sandeep Singh was the goal scorer and the match concluded with a 7-5 score line. 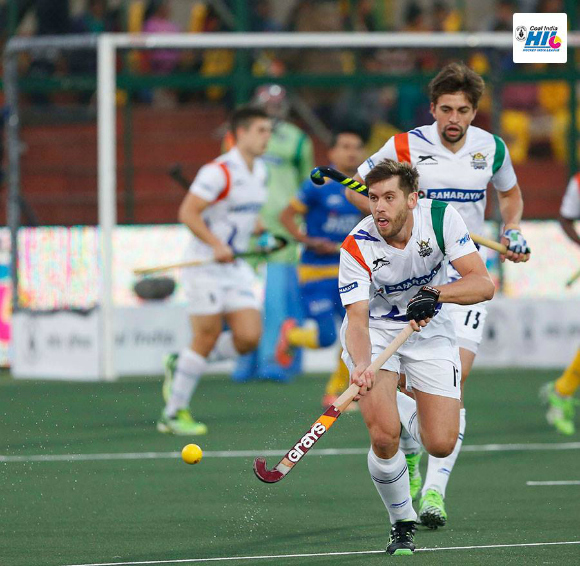 The Wizards gave the Warriors a hiding in their own back yard in what was a hard fought affair.

The match remained at 0-0 until Q3. A fantastic team goal from the Wizards was what it took to break the deadlock.

A reverse pass into the right side of the D, a sharp ball across the face of goal and a timely finish by Akashdeep Singh made it 0-2 to the visitors.

A field goal, converted by Gonzalo Peillat, in the dying embers of the game rounded off a 0-3 victory for the Wizards. 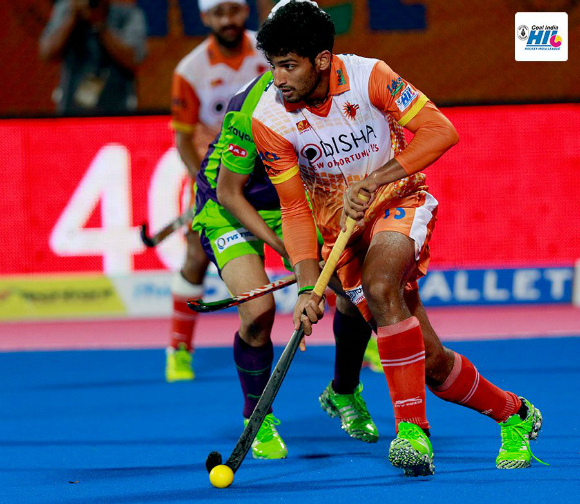 Another very one sided match; this time the home side prevailing with a convincing win.

Glenn Turner is proving to be the Lancers talisman figure this season. He received the ball in between two defenders, burst forward into the D where he was one on one with the keeper, and he made no mistake.

He took the keeper wide and nut-megged him for the field goal; 2-0 to the Lancers.

Turner really is proving to be the player of the tournament so far. He doubled the home side’s lead with another field goal with just as much quality.

A great improvised pass found Turner in the centre of the D. The ball in forced him to turn and reverse shot low and hard towards goal. 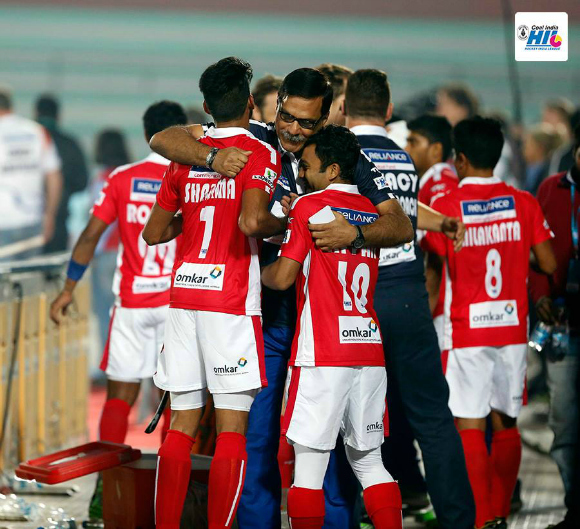 This week has witnessed an impressive change in fortuned for Dabang Mumbai.

Fans witnessed their first home win against the league leaders and now a first away win in 2016, against the Utrar Pradesh Wizards.

In the 6th minute of the game the away side opened the scoring through Johan Bjorkman. A succession of sharp passed led to Bjorkman prodding home a couple of yards away from goal. 0-2 to the away side.

The Wizards managed to get one back via a penalty corner 14th minute, which was converted by Gonzalo Peillat.

However, the score line was unaltered for the remainder of the game meaning this is the Wziard’s fourth consecutive home defeat. 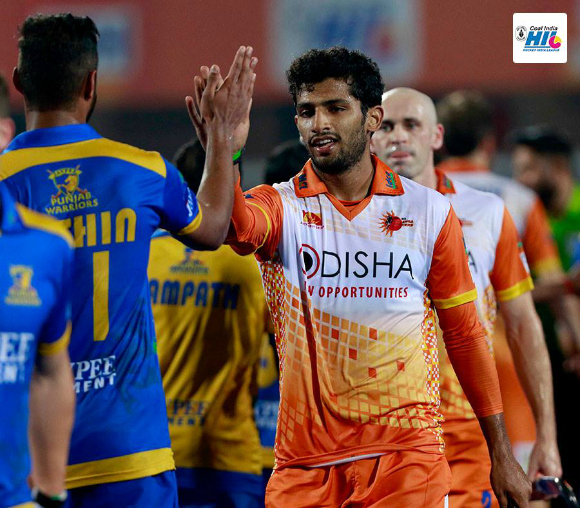 The final match of the week saw the league leaders, the Kalinga Lancers face off against mid table side, Jaypee Punjab Warriors.

Glenn Turner continued his outstanding run of form by providing the opening goal of proceedings via a penalty corner in the 42nd minute.

The drag flick was heading wide so Turner reacted and guided the ball goal wards to make it 1-0 to the home side.

The Warriors responded in the 48th minute. The ball was released towards the outside of the D, rifled back in-field and bundled towards the goal by Simon Orchard. The field goal gave the away side the lead at 1-2.

in the 58th minute Satbir Singh deflected a driven pass from the outside of the D through the legs of the keeper. The match ended at 1-4.

The result means the Warriors and Lancers are only separated by goal difference at the top of the league.

The fast and furious format of these Indian franchised sporting tournaments makes anything possible.

This week has featured some of the most unpredictable results of the hockey season so far and it’s still all to play for as we enter the final third of the tournament.