India beat Australia by fifty-seven runs in the seventh One Day International played at Bengaluru to win the seven match series 3-2. Rohit Sharma was declared Man of the Match for his 209 and Man of the Series after scoring 491 runs.

“Getting a 200 in the ODI format is a wonderful feeling. We wanted to stay in and capitalise."

Rohit Sharma lit up the M.Chinnaswamy Stadium with an exhilarating double century to help India win the seventh and final deciding One Day International (ODI) by fifty-seven runs on November 2, 2013 in Bengaluru, India.

Going into the final game, India were hoping to continue the form which won them the sixth ODI in Nagpur by six wickets. Also with Diwali on the horizon this would set up the night for a double celebration with some spectacular fireworks. 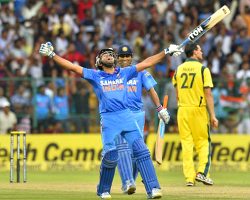 Both India and Australia had won two ODI’s each with one being a no result and the other being abandoned without a ball being bowled. The final game was now the decider for the series.

The weather was cool and humidity low, and considering the playing field was made for the batsmen, Australian captain George Bailey won the toss and elected to field.

Rohit Sharma and Shikhar Dhawan opened the batting for India. In the third over, Sharma hit Nathan Coulter-Nile for the first boundary of the match.

This was followed by three consecutive fours by Dhawan off the bowling of Clint McKay in the next over, taking India to 26-0 from three overs.

In the ninth over, the first huge six of the Indian innings over extra cover came from Sharma off James Faulkner. Dhawan reached his fifty and India looked dominant; by the 16th over courtesy of another boundary from Dhawan, India were 103 without loss.

The rain came in the 17th over, which was a relief for Australia as this would give them some respite and hopefully take the momentum from the two Indian batsmen. Play was interrupted for twenty-five minutes as India resumed play on 107-0. 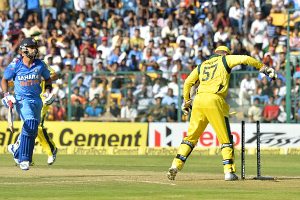 The rain was a blessing in disguise for the Australians, as Dhawan (60) was out lbw to Xavier Doherty for 60 to leave India on 112-1.

In came Virat Kohli and within a couple of balls he too was back in the pavilion without scoring after a mix up with Sharma, India 113-2.

Sharma now had to compensate for the loss of India’s in-form Kohli with an innings of his own and he was ready for it as he completed his 20th half-century in ODI’s off seventy-one balls.

In an attempt to up the tempo, India lost a further two wickets as Suresh Raina (28) and Yuvraj Singh (12) departed cheaply. In the 37th over, Sharma reached his fourth ODI century off 114 balls and was then dropped on 120 in the 42nd over, which would come back to haunt Australia.

Sharma didn’t need a second chance and from there on he ripped Australia to shreds with some scintillating batting.

Whilst Sharma continued driving and flicking fours and sixes, he was supported by captain Mahendra Singh Dhoni [62] who hit some lusty blows, including a helicopter shot going the distance. At this point the run rate was going nicely and a big total was quite ominous. 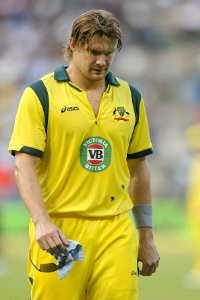 In the 49th over and on 198, Sharma reached his double century off just 158 balls with a massive six through cover off the first ball of McKay’s final over.

McKay’s second ball was smashed over mid-wicket for another huge six. Sharma hit sixteen sixes in total, a world record in ODI cricket.

The third ball saw Sharma [209] flick it over square leg where he was caught and that was the end of a record-breaking innings that led to a standing ovation from the crowd.

Sharma said: “I am in a good nick, just wanted to carry on from the last game. Disappointed to not get a hundred in the last game, but I wanted to make sure that once I got my eyes in, I play big.

“As you play, records will happen. I just wanted my team to win; It will be a wonderful feeling then,” he added.

India scored 101 runs in their last five overs to finish their innings on 383 for 6 from fifty overs.

Australia started badly in their pursuit of 384, as Aaron Finch was trapped lbw for five off Mohammed Shami’s bowling.

Brad Haddin and Philip Hughes steadied the ship before Hughes hit the ball straight to Yuvraj Singh at mid-wicket in the 12th over, leaving Australia on 64-2. George Bailey (4), Haddin (40) and Adam Voges (4) all lost their wickets as Australia were now struggling on 132-5 from twenty-two overs.

Glenn Maxwell scored his fifth half-century before losing his wicket in the next over. Maxwell equalled Simon O’Donnell’s eighteen ball record for the fastest half-century by an Australian.

When Shane Watson was unluckily out for a valiant forty-nine, the match seemed all but finished. 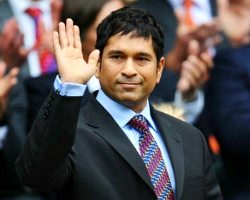 At 211 for 8 in the 30th, the pairing of James Faulkner and Clint McKay gave Australia a lifeline. A 115-run partnership with some blistering hitting by Faulkner got Australia back into the game.

Faulkner knocked Vinay for twenty-one runs in one over and moved from 35 off twenty-nine balls to a century in the next twenty-eight deliveries.

Faulkner’s hundred off fifty-nine balls was the fastest by an Australian in ODI cricket, bettering the previous record held by Matthew Hayden (off sixty-six balls versus South Africa in 2007).

Ravindra Jadeja began to slow them down and with Australia needing sixty-seven off 48 balls, he took the wicket of McKay with his final delivery of his spell.

The next over saw the end of Faulkner’s remarkable innings of 116 off seventy-three balls, as Australia were all out for 326.  For India, Shami and Jadeja were pick of the bowlers, taking three wickets each.

India won the seesaw battle by fifty-seven runs and clinched the seven match ODI series 3-2. It was no surprise that the Player of the Match was Rohit Sharma; he was also voted Player of the Series for his 491 runs:

“Getting a 200 in the ODI format is a wonderful feeling. We knew it’s a small ground and runs are easy to come by, so we wanted to stay in and capitalise,” said Sharma.

The crowd had witnessed an unbelievable game of cricket, which included some record breaking knocks.

Rohit Sharma smashed multiple records. He now holds the highest individual score at Bengalauru. Sharma becomes the third batsman in history to score 200 in an ODI innings after Sachin Tendulkar (200*) and Virender Sehwag (219). His 209 is second highest score by any cricketer in ODI cricket.

MS Dhoni and Virat Kohli have both been nominated for the ICC People’s Choice Awards, with the latter now being ranked as the number one batsman in ODI cricket.