“We all know Rohit is a gifted cricketer and it was a very good performance from him."

A sixty-eight run partnership between Suresh Raina and Rohit Sharma guided India to a convincing victory in Mohali, earning them a series win against England. Raina and Indian captain Mahendra Singh Dhoni added fifty-five crucial runs, which ensured India had to travel a rather short distance to register the win.

Even though the match went into the 48th over, there was only going to be one winner.

Man of the match Raina batted superbly for his unbeaten knock of eighty-nine runs, which included nine 4’s and one 6. He displayed marvelous creativity with the bat, as field placings almost became irrelevant at the end. He batted very sensibly to keep the scoreboard moving. Delighted by his performance Raina said: 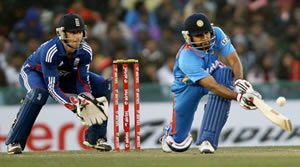 “I was talking to Rohit about staying positive and we had a tremendous partnership. It is important to back our natural instinct and also rotate strike and God has been kind and I took my chances today and I stayed till the end.”

“I have been doing well of late. It is the result of the hard work that I have been putting up at the nets, thanks to the coach and the dressing room environment,” he added.

History was also on India’s side. The England team has not won a one-day series against India in India since 1985, despite coming close in 2002. In fact by beating England in this series, India have become the No.1 ODI side in the latest ICC rankings.

The day-night match was played at the Punjab Cricket Association Stadium on 23rd January 2013. In the fourth game of a five match series, India won the toss and elected to field. England didn’t have a particularly impressive start, losing Ian Bell for ten in an opening partnership, which contributed thirty-seven runs. Bell failed to get going, but Kevin Pietersen appeared in good touch. 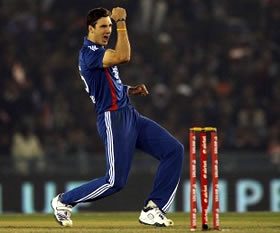 Pietersen and captain Alastair Cook then put on a very steady ninety-five runs partnership for the 2nd wicket. At this stage it was looking ominous from India’s point of view, before England suddenly had a middle-order collapse. The trio of Cook, Eoin Morgan and Samit Patil perished in quick succession. From 132-1 England were now toiling at 142-4.

The England batsmen didn’t take advantage of India’s wayward bowling in the middle of the innings. Indian bowlers Shami Ahmed and Ravichandran Ashwin struggled to control their line and length throughout their bowling spell.

Nevertheless England finished on 257 for seven, which was an average score at this ground. The pair of Joe Root and Jos Butler helped them add some vital runs in the closing stages of their Innings.

Their sixth wicket stand yielded twenty-one runs, with Root remaining unbeaten on fifty-seven. This was his maiden half century in limited overs cricket. Cook and Pietersen were joint top scorers, as they contributed seventy-six valuable runs each.

For India the bowling honours went to slow left arm spinner Ravindra Jadeja, who took 3-37 in his ten over spell. The twenty-four year old showed his potency when he grabbed two wickets and scored sixty-one runs in the crushing win against the tourists in Kochi.

Set a target of 258 runs, India lost left-handed opener Gautam Gambhir, with just twenty runs on the board. Virat Kohli who replaced Gambhir, batted very watchfully. He added fifty-two runs for the second wicket with the elegant Rohit Sharma. But when Kohli [26 off 33 balls] and Yuvraj Singh [3 off 16 balls] headed back to the dressing room, anxiety started creeping in the Indian camp.

The turning point in the match was when umpire Steve Davis ruled in favour of Raina who was caught at slip with India still requiring eighty runs to win. According to the umpire he was given not out, because England’s Steven Finn had dislodged the bails during his delivery stride. 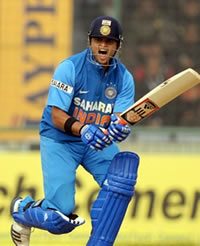 According to Law 23.4[b][vi], a batsman cannot be dismissed if he’s been distracted while preparing to receive a delivery. Cook was not very happy with the decision, which in effect cost them the match and series.

Sharma and Raina steered India out of the woods and once they got into top gear, the result was never in doubt. It was relieving for India to see the talented Sharma at his best. As the situation demanded, Sharma anchored the innings beautifully. He scored eighty-three runs, which included eleven 4’s and one 6. Praising the cricketer from Nagpur, MS Dhoni said:

“We all know Rohit is a gifted cricketer and it was a very good performance from him. He is a natural puller of the ball and one cannot bowl too many short deliveries to him. Once he got to his fifty, he converted it to a big one.”

Sharma’s professionalism sank the England bowlers with only Finn and James Treadwell bowling a decent length. Jade Dernbach and Patil were very costly, as they were knocked to all parts of the ground.

The English bowlers fought till the end without any realistic hope of winning the match. England were defending an inadequate total in the face of a strong Indian batting line up. To be fair without the likes of Stuart Broad, Graeme Swann and James Anderson, this was more of a second string English bowling attack. 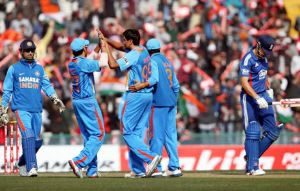 India won the match by five wickets with fifteen balls to spare. But most importantly they finally won a series during a winter season, which saw them losing a test series to England, followed by an ODI series loss to Pakistan.

At the post match ceremony, a smiling MS Dhoni said he was happy with the “overall performance” of the team. His counterpart, Alastair Cook was pleased by his team’s spirited display, particularly the performance of Joe Root.

“Rohit-Raina partnership really took things away from us. They changed the momentum, we could not stop them but to get this close was also a good performance,” Cook said.

“Joe Root played pleasingly, he moved the ball around well and we put up a pretty good score on this wicket, he added.”

Naturally England were very disappointed not to have taken the series to a final game decider. England won the first encounter in Rajkot by nine runs, before India thrashed the visitors in the following two matches played at Kochi and Ranchi.

The Ranchi Cricket Stadium made its debut as an International venue on 19th January 2013. For MS Dhoni, it was a very special occasion to play in his home town. At Ranchi, India comprehensively beat England by seven wickets.

The fifth and final ODI match takes place at the Himachal Pradesh Cricket Association Stadium in the city of Dharamshala on 27th January 2013.

Faisal has creative experience in the fusion of media and communication and research which increase awareness of global issues in post-conflict, emerging and democratic societies. His life motto is: "persevere, for success is near..."
Hero Hockey India League 2013
IPL 2013 Auction Results