"Always nice to play well at your home ground in front of a big crowd."

All round performances from Yorkshiremen Adil Rashid and Joe Root completed a dominant 8 wickets win for England against India at Headingley, Leeds on 17 July 2018.

And by winning the 3rd and series-deciding finale, England managed to clinch the Royal London One Day International (ODI) Trophy 2-1.

England won the toss and decided to put India into bat on a cloudy yet pleasant day. The home team brought in James Vince for Jason Roy who was nursing a finger injury.

Meanwhile, India made three changes to their side for this all-important final game dubbed as a warm up to the 2019 Cricket World Cup.

Ruchira Palliyaguruge (Sri Lanka) and Michael Gough (England) were appointed as the two umpires for this decisive match. 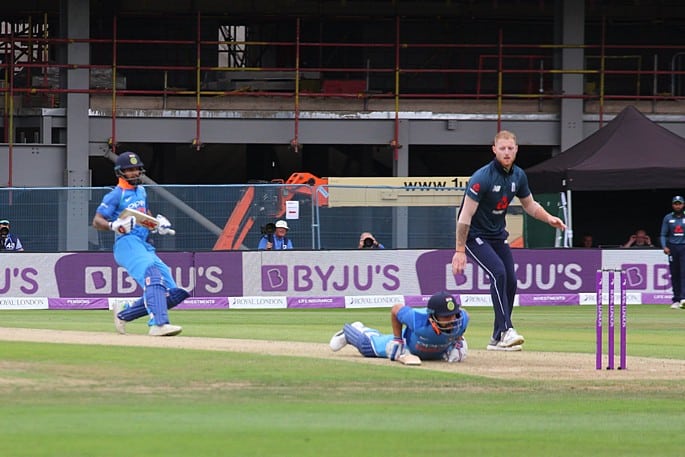 Batting first, India were hoping to put a competitive total on the board. The visitors did not get off to the best starts as Rohit Sharma (2) fell cheaply, caught at deep square leg by Mark Wood off David Willey.

Shikhar Dhawan and skipper Virat Kohli, however, did time the ball well to complete a fifty runs partnership.

It was all seam bowling from England at the beginning of the Indian innings before Moeen Ali came into the attack.

Following a drinks break, England got the crucial breakthrough. Ben Stokes backing up at mid-wicket did some excellent fielding to run out Dhawan (44) just when he was set to make a good score. The scalp of Dhawan left India 84-2. 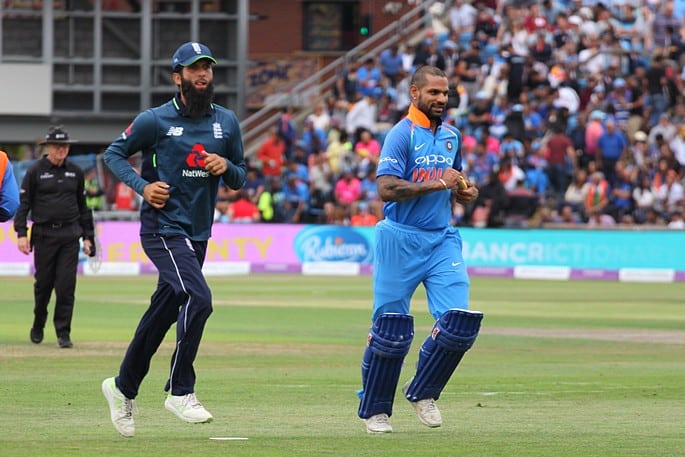 Kohli got to yet another fifty in the 24th over with some wristy and powerful shots. His partner, Karthik was looking good until he dragged the ball through his bat and pat to hit the stumps off leg-spinner Adil Rashid for 21.

With India on 125-3, the game was nicely poised. It was now left to the experienced heads of Kohli and Mahendra Singh Dhoni to reach a healthy total.

But moments later, Kohli was out to a Jaffer of a leg-spinner. The delivery from Rashid pitched on leg and sharply spun to hit the top of Kohli’s off stump. A surprised and set Kohli had to walk off back to the pavilion for 71.

Suresh Raina (1) had a very short stay at the crease as he flicked the ball straight at the throat of Joe Root at leg slip off Rashid. 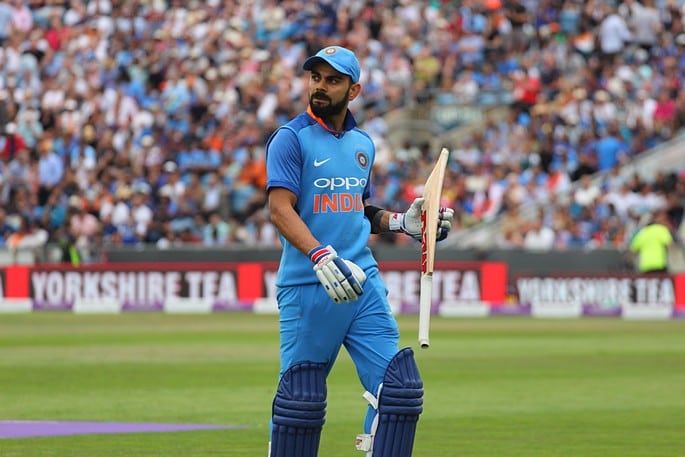 With Rashid taking two wickets in 31st over, India was heavily on the back foot at 158-5.

Had it not been for a successful review by MS Dhoni, India would have lost another crucial wicket. He was initially given lbw when the ball hit his back pad off Ali. But the original decision was reversed as Hawk-Eye showed the ball was travelling too high over the leg stump.

Hardik Pandya (21) who has not been at his best was next to go, caught by Butler off a wonderful seam position by Wood. All it needed was a faint edge to Pandya’s tentative and defensive approach.

Joining Dhoni in the middle was Kumar. They both kept prodding along before Dhoni hit a timely boundary in the 43rd over. This was India’s first boundary since the 37th over.

By the 45th over, the floodlights began to kick in as the conditions were quite overcast. 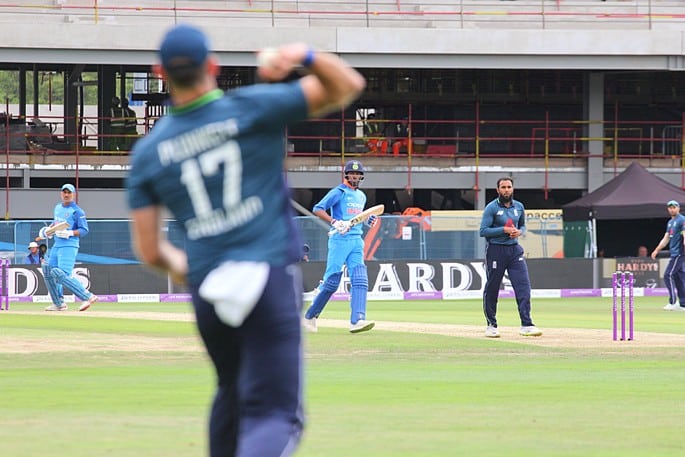 A full zippy delivery by Willey saw Dhoni eventually out, caught behind by Butler. Dhoni once again could not get going, scoring 42 off 66 balls. It was not a great knock. Fans wishing for explosive innings and finishing heroics by Dhoni did not come true.

At the end of the innings, Indian spectators did have something to cheer about when Thakur hit a six towards the Western Terrace in the 49th over. He also smashed another six in the penultimate over.

India was trying there best to press on in the 50th over, but could not quite connect willow to the ball.

England took a wicket off the final ball, as Kumar found Jonny Bairstow at widish deep midwicket off Willey for 21. Willey finished with three wickets for 40 runs. 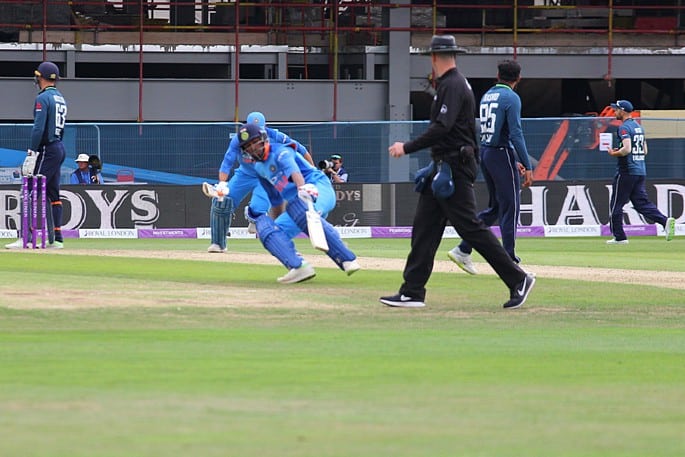 India was unable to run away in the death overs. England had bowled and fielded very well.

Rashid had a brilliant spell, taking 3 wickets in his 10 overs. He gave a lot of air to the ball, whilst spinning the ball in his home territory. Despite being wicketless, Ali did a great job at the other end.

Dhawan’s wicket changed the course of the game. There were lots of starts for the Indian batsmen, but no one could materialise it to something bigger.

With India finishing on 256-8 in their 50 0vers, it was not a formidable total by any imagination. However, it was enough for India to make a game out of it. It was vital for India’s two leg-spinners to fire on all cylinders if they were to have a chance. 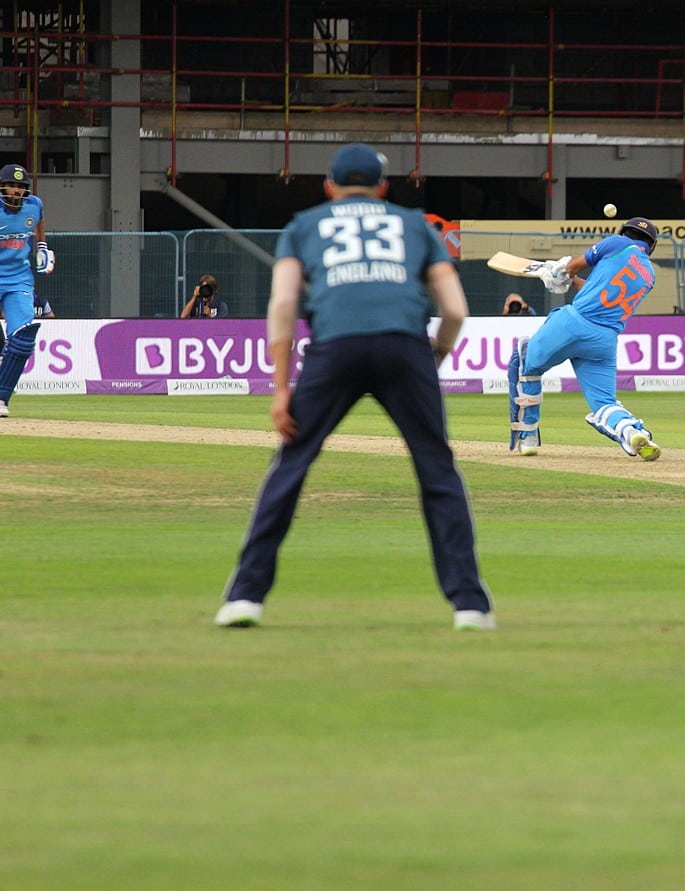 With a blanket of cloud above the ground, the floodlights were now in full effect. The England opening pair of Bairstow and Vince began like a bullet train. Bairstow, in particular, was invincible as he hit some powerful shots in the gaps.

Bairstow’s (30) innings came to a tame end when he chipped it straight to Raina at mid-wicket off Thakur. Thus England lost their first wicket at 43.

With the sun emerging for the first time, Root and Vince kept England marching on.

England got to their fifty with an electrifying start. They had made 71 runs by the 9th over – most runs conceded by India over this decade. 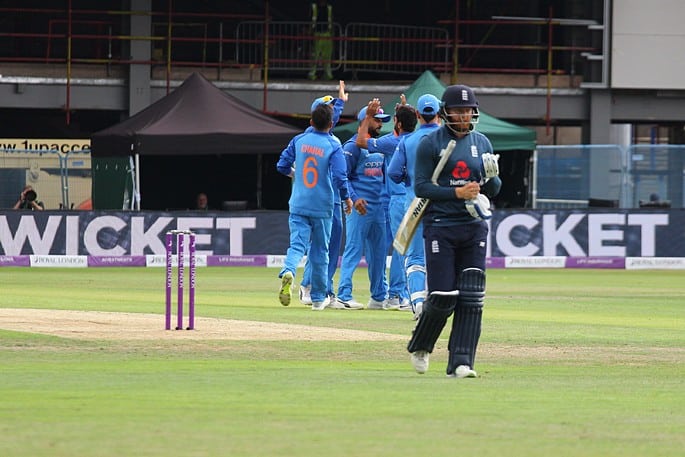 Vince then just short of his ground was needlessly run out, thanks to MS Dhoni who off balance quickly collected the ball from mid-wicket before removing the bails.

Had fielder Pandya’s throw been more accurate, Vince would have been out by a mile. It was poor running by Vince as he failed to dive towards survival.

Captain Eoin Morgan came on to the pitch with very little pressure on him. India did not help their cause with some really slopping fielding.

There were no further alarms as England got to 100 in the 15th over. Morgan and Root were moving on nicely, playing some glorious shots. 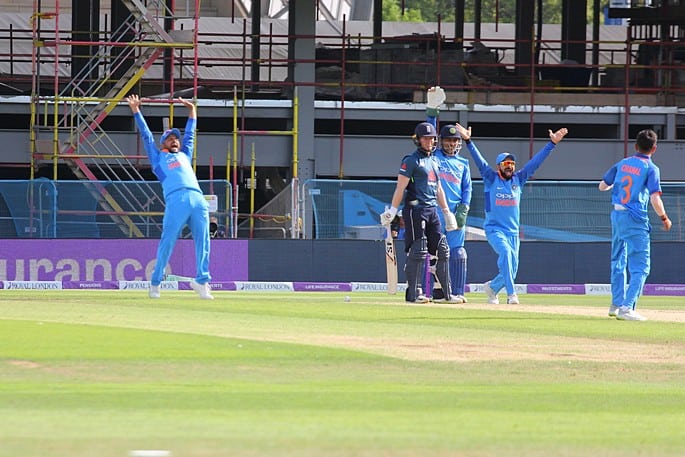 The Indian fans in the ground were quite concerned at this stage. Even stats were not on India’s side. Though India had a good record of defending low scores, England also had a good record at chasing such a mid-range score.

Root who scored a century at Lords followed it by a magnificent half-century. When the chips were slightly down, Root somewhat came to the rescue.

The big question now was could India conjure a wicket or two. But even the wrist spinning duo of Kuldeep Yadav and Yuzvendra Chahal could not weave any magic.

Leading by example, Morgan too reached his 37th fifty with an assured performance. It was really going well for England, with the run rate below 4 runs per over.

The evening sun was out to add serenity to the fantastic cricket spectacle. The crowd too got into the action, with a Mexican wave going around the stadium. 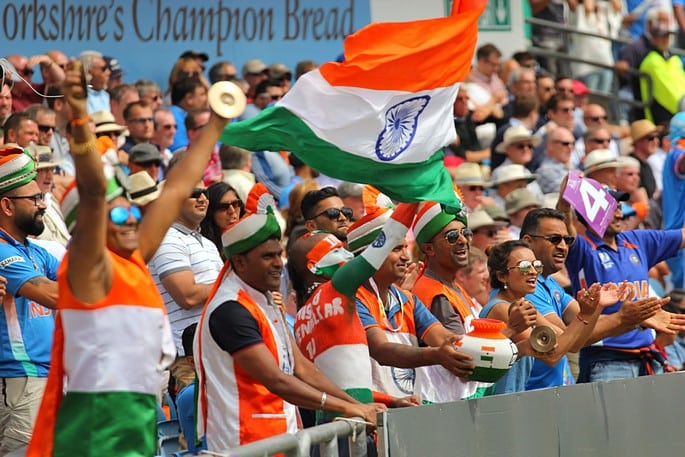 England was on cruise control, reaching the 200 mark in the 35th over.

With everyone urging Root on for another hundred, he hacked it for a boundary to complete a brilliant second consecutive century and a 2-1 series victory for England.

Root has 13 ODI centuries in 116 matches, overtaking Marcus Trescothick who had 12 in 123 matches. Root remained unbeaten on 100, smashing ten 4s in his innings. He was well supported by Morgan who was not out on 88.

An unbroken stand of 186 by Root and Morgan ensured a demolishing 8 wickets win for England. It was a clinical performance by England, executed by two Yorkshiremen, Adil Rashid and Joe Root. 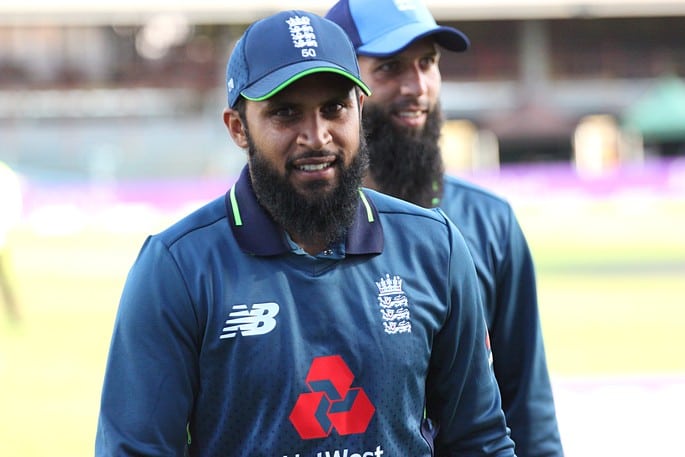 “Obviously nice, though the seamers bowled well, then me and Mo got our rewards. Stick to your strengths, Moeen bowled exceptionally well, as well.

“You work hard in the nets, and you get confidence from there. [Kohli wicket?] He’s one of the best in the world, but we’re bowling exceptionally well, want to carry it on. Always nice to play well at your home ground in front of a big crowd.”

Player of the Series Joe Root complimenting England’s performance and looking ahead to the Test Series told the media:

“It feels fantastic, to come into a big series like this and to perform how we have is great, testament to the hard work guys do, we set the tone early with the ball, backed it up brilliantly, kept taking wickets and then were ruthless at the end. 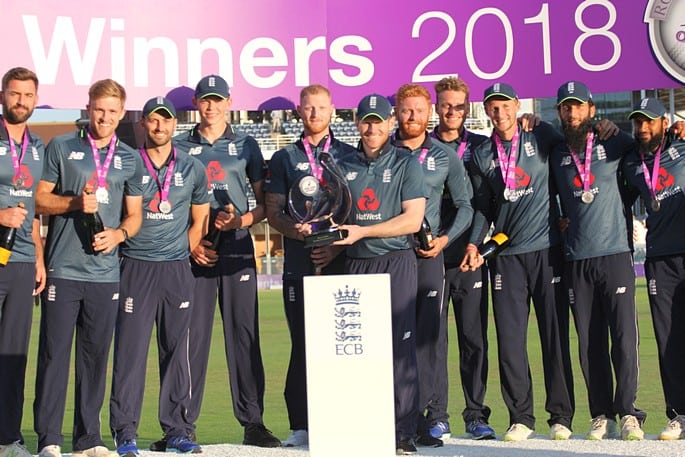 “On the slow side but a pretty good wicket, it was about getting a partnership together, there wasn’t scoreboard pressure, kept driving that home and making it as big as possible. Feel like I’ve contributed last two games, hopefully, a start going into the Tests. It’s going to be a great series, we’re going to have to play really well.”

Graciously acknowledging defeat and the peach of a delivery from Rashid, Virat Kohli mentioned:

“I thought we were never on the mark as far as runs were concerned, we were 25 runs less, England were clinical with the bat, ball and in the field, and deserved to win. Against a side like England, you had to be at your best.

“We need to move on and improve as a side. Every side is looking for the best balance possible, these losses will tell us what we need to work on.

“It was a quality ball, I’ve been playing him [Rashid] since U-19, he’s a quality bowler, just one of those deliveries to take in your stride and say ‘Wow, I was done by that’.”

It was one of those days for India. Whatever could have gone wrong did actually go wrong. The continued selection of Suresh Raina and dropping Umesh Yadav will be discussed.

MS Dhoni will also be the talk for many. Can Team India afford to stretch him until the 2019 Cricket World Cup? Some will naturally feel that it is time to replace the old guard with fresh new talent.

With honours even in coloured clothing cricket, both teams go into the 5-match Test series with everything to play for.

The first Test between England and India at Edgbaston Cricket Ground in Birmingham commences on 01 August 2018.

View all the action from the game in our photo gallery: