"We were confident going into the match versus Pakistan."

The much-anticipated one-day international game between India and Pakistan boiled down to Duckworth-Lewis at Edgbaston cricket ground in Birmingham on 15 June 2013.

India thumped Pakistan by eight wickets in the rain-affected Group B game of the 2013 ICC Champions Trophy. This was India’s first victory against Pakistan in the Champions Trophy, having lost previously to them in 2004 and 2009.

The Indo-Pak match as always promised high voltage despite the fact that the outcome of the game would not impact the tournament.

India were already through to the semi finals, whilst Pakistan after successive defeats to West Indies and South Africa, crashed out of the tournament.

In the build up to the match, Pakistan captain Misbah-ul-Haq described the contest as “a final for everybody” and said victory would lessen the blow for the supporters.

Meanwhile Indian skipper MS Dhoni said a strategy had been devised to play Pakistan. Talking about the importance of the game Dhoni added: 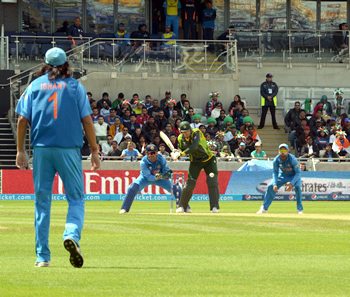 “The India-Pakistan game is always a big game. Both sides are more mellowed now than was the case in the 1980s and 1990s, and that is good for cricket. But the intensity is the same and that makes it very entertaining for spectators.”

India won the toss and elected to field. This was the correct decision considering that rain had been predicted for the day. The other key factor was the pitch, which was expected to have uneven bounce – it was a two faced pitch.

India were unchanged, while Pakistan left out opening batsman Imran Farhat for Asad Shafiq, who returned to the side after being dropped against South Africa. 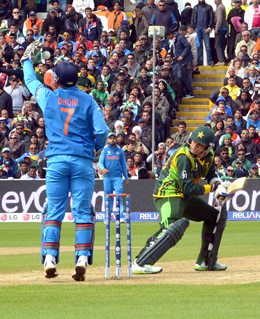 Hafeez was out for 27, following a brief rain interruption to leave Pakistan on 50-2. And that became 56-3, when Akmal threw his wicket on 21. The rain once again came; with the match being reduced to forty overs a side.

Post the rain interruption, Pakistan clearly wanted to up the tempo, with their 100 coming up in the 26th over. Middle order batsman Shafiq was in good nick at this moment of time.

But India struck again soon after, as Ravindra Jadeja rattled Misbah’s furniture to send him back to the dressing room for 22. Four overs later, Pakistan lost their 5th wicket.

A DRS [Decision Review System] appeal went in favour of India, as replays clearly showed that the ball flicked Shafiq’s bat on the way to Dhoni. Shafiq was out on 41, with Pakistan struggling on 131-5.

Bollywood actor Akshay Kumar, known as the original Khiladi [player], was at the ground enjoying the khel [game] alongside the men in blue. Model and actress Deana Uppal was also inside the stadium, waving the Indian flag.

Pakistan who were at one point 110-3, eventually crashed out for 165 in 39.4 overs. India’s revised target under the Duckworth-Lewis method was 168. 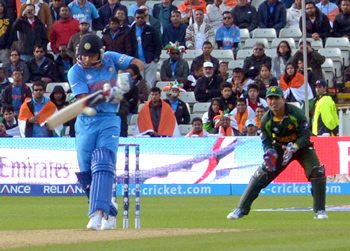 The Indian openers began strongly, reaching 37-0 after the first seven overs. But yet another rain interruption saw the target being revised again to 157 off thirty-six overs.

Rohit Sharma fell almost immediately after resumption of play, caught by Misbah at Mid-wicket for 18 runs. With India at 63-1 after 11.2 overs, another rain interruption forced the target to be revised to 102 in twenty-two overs.

After the rains a lovely rainbow emerged up in the skies, as India now needed only 39 runs off 10.4 overs. It seemed like Shikhar Dhawan wanted to end the match in a hurry. Jamshed caught Dhawan at third man for 48.

But Virat Kohli [22*] and Dinesh Karthik [11*] completed the task easily in the 20th over, taking India to an empathic eight wicket win against their arch-rivals.

Indian won three matches out of three to top Group B, the only team to have won all their games so far. Pakistan lost all three matches in the round robin stage of the tournament. South Africa finished second in the group and also qualified for the semi finals alongside India.

At the post match ceremony, MS Dhoni acknowledging the Indian crowd and the team’s performance said:

“The fan support has always been there, no matter where we play. The whole team is doing really well, in all the three departments. We are the top fielding side in world cricket as of now, we need to keep the intensity up.” 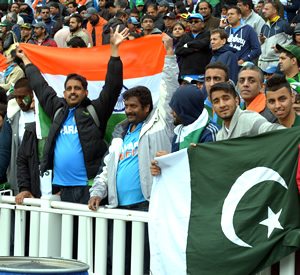 Bhuvneshwar Kumar was declared man of the match for his excellent spell of 2-19 in eight overs. “We were confident going into the match versus Pakistan,” said the Indian frontline bowler.

India will be very confident going into the knock out phase of the tournament. Karthik, Jadeja and Dhawan have all played outstanding cricket in the tournament.

Dhawan has been the find of the tournament, scoring two centuries against South Africa and the West Indies. He has an element of cockiness in his play – the man from Delhi has all the shots in the book.

Jadeja is on par with Dhawan, having taken nine wickets in the tournament, including a five wicket haul against the West Indies.

Faisal has creative experience in the fusion of media and communication and research which increase awareness of global issues in post-conflict, emerging and democratic societies. His life motto is: "persevere, for success is near..."
Boxing star Amir Khan weds Faryal Makhdoom
India wins 2013 ICC Champions Trophy