“I think I’ll change as a person when I’m married and it’ll be a big plus for me."

The wedding reception took place in an elaborate Arabian-esque ceremony at the grand Waldorf Astoria Hotel in Manhattan on May 31, 2013.

It was attended by 400 people, including our very own Jay Sean, and reportedly cost $1 million. The lavish ceremony included a five tier wedding cake and elegant thrones on top of a stage with two 20-ft long mirrors either side.

Amir matched his bride with a similar embellished sherwani in red and gold, paired with a red turban and gold sword. 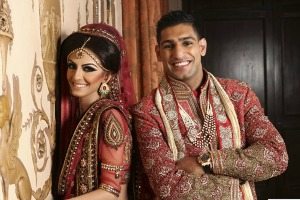 The newly-weds seemed to glow in their happiness and treated their guests to a rich and glamorous evening of food and entertainment.

Interestingly, the couple were actually secretly married a day before in a private ceremony that was held at the Staten Island Excelsior Grand.

The traditional Muslim Nikkah was then followed by a dance off between the bride and groom and their closest friends as they performed choreographed dances to Bollywood tracks in front of 350 people.

The nuptials of the couple have been in the works for some time. Amir initially proposed to his wife in 2011, with what was reported to be a $160,000 diamond ring.

This followed with an impressive engagement ceremony in front of 1,000 guests at the Reebok Stadium in Amir’s hometown of Bolton.

Speaking about the marriage, Amir said: “I had to get in there and tie the knot quickly, before I got beaten up in too many fights and lose my looks.”

Of course this means, that the celeb will have to cut down on his excessive partying:

“I’ve got to look after Faryal, so I won’t be going out as much partying with my friends. I don’t want that any more – I want to do the family thing.”

Amir has already been criticised recently over the impact that his celebrity lifestyle has had on his boxing. The boxer who narrowly won against Julio Diaz in April is keen to regain his world title later this year:

“I think I’ll change as a person when I’m married and it’ll be a big plus for me, I’ll be able to be more focused on my job too,” Amir added.

Amir’s American promoters, Golden Boy also welcomed the nuptials. Chief Executive Richard Schaefer said: “This wedding seems to me to be perfect timing for Amir as he matures into a fine young man and as a fighter.”

Amir’s father and mentor, Shah Khan also added: “We are very happy as a family and I am sure the responsibility of married life will be good for Amir.”

With the Nikkah and Barat over and done with last week, Amir and his new wife returned to UK to continue celebrations in Bolton.

The couple flew via helicopter on Sunday 9th June from the Reebok Stadium to an exclusive secret location in Manchester, which was attended by 4,000 guests. 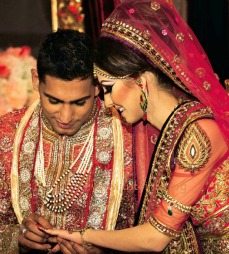 They arrived in a black car with a red ribbon and the number plate, ‘BOXING’.

Guests included the likes of boxing champs, Ricky Hatton and David Haye. Footballers from Amir’s favourite Bolton’s Wanderers and Manchester United were also thought to be in attendance as well.

Faryal tweeted her excitement over the UK wedding following the New York ceremony:

“Last night was like a dream, truly amazing. Thanks to everyone that participated, really meant a lot x Now ready for the UK wedding!!”

The week long fairy tale wedding has been a dream come for Faryal:

“I’m so happy to be with the man I love and to spend the rest of my life with him – it’s a new chapter in my life,” she says.

Faryal is now expected to slowly adjust to family life in Amir’s hometown of Bolton. Initially she was unsure of living in the UK but has since accepted her new life and new family.

Following Amir’s last match in April, boxing has been on the backburner for now. Amir will resume training in preparation in August and September when he will compete for the world title in December.

Aisha an English literature graduate, is a keen editorial writer. She adores reading, theatre, and anything arts related. She is a creative soul and is always reinventing herself. Her motto is: “Life is too short, so eat dessert first!”
ICC Champions Trophy 2013
India beat Pakistan in ICC Champions Cricket