In the first match for both teams at the 2015 ICC Cricket World Cup, India beat Pakistan by 76 runs in an exciting international derby at the Adelaide Oval.

“That long partnership between Shikhar and Virat was the crucial aspect."

India kicked off their ICC Cricket World Cup campaign by beating Pakistan by 76 runs, in their Pool B match on Sunday 15th February 2015, at the Adelaide Oval.

He was backed-up by batting partner Shikhar Dhawan, who smashed his way to 73 runs, and the typically explosive and audacious Suresh Raina, who scored 74.

India played to their strengths. Having won the toss, they elected to bat. Their total of 300 runs proved formidable. 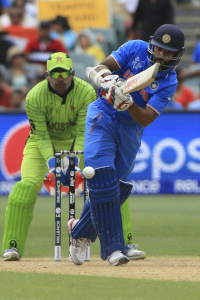 Kohli said: “My role in the team is to bat through. And the power hitters around can come in and play with freedom, because they know one end is secure. That’s something that I’m going to look to do in this World Cup.”

India captain MS Dhoni said: “I think it was a very good performance started by the batsmen.

“That long partnership between Shikhar and Virat was the crucial aspect. And then Raina went in and he capitalised along with Virat.”

India made a measured start and had deliberately set out to pace their innings. After 10 overs, India were only 41/1. But this gave the team a solid platform.

With the foundation established, India’s top run-scorers began to let loose. Having plenty of wickets in hand allowed them to play free-flowing strokes.

Even though Pakistan’s strength has traditionally been their bowling, they were not helped by the flat and dry wicket at the Adelaide Oval. 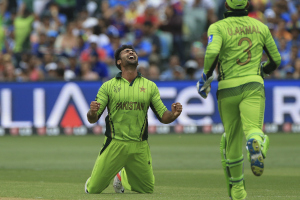 Mohammad Irfan, the 7’1” giant, was not the threat that he usually is. He was warned twice by the umpires for treading on the central track. His woes were symptomatic of Pakistan’s troubles.

However, Pakistan’s persistence paid off and they finished the innings with a flurry of wickets.

Sohail Khan was the bright spark and his energy was infectious. He finished the innings with an impressive five-wicket haul.

He might lack the pace of the famous Pakistani bowlers of past, but his consistent line and great movement asked questions of India’s top-order batsmen.

Pakistan restricted India to only 27 runs from the last five overs of the innings. And even though India finished 300/7, the Pakistani players celebrated with elation.

Momentum is crucial in sports, and it definitely seemed like it had swung in Pakistan’s favour.

Nevertheless, both sides seemed happy heading into the pavilion for lunch, with the match poised for an entertaining second act.

Being a day/night match, the chasing team was always going to be at a disadvantage. The humidity at night aids the bowlers with their swing, and decreases visibility for the batsmen.

It seemed that India had done their homework better than Pakistan had, and this showed in the disparity between the teams’ bowling and fielding strategies.

India’s bowling attack might have felt like they had a point to prove. They bowled Pakistan all out for 224 in 47 overs.

After Pakistan lost the out-of-form Younis Khan with only 11 runs on the board, Ahmed Shehzad and Haris Sohail steadied the ship. 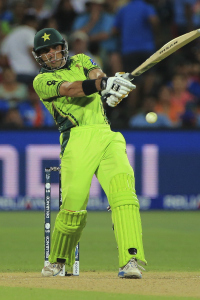 It looked like Pakistan had made a better start to their innings than India did, and were 102/2 at one stage.

However, under the guidance of master-tactician MS Dhoni, India tightened the screws. The boys in blue built pressure with dot balls to strangle the Pakistani batting attack.

Eventually a frustrated Shehzad cracked. Both he and then Sohaib Maqsood fell to an inspired Umesh Yadav. Umar Akmal was out soon after. These three quick wickets left Pakistan at 103/5.

Mohammed Shami was the pick of the Indian bowlers, with four wickets for 35 runs. His double-strike of star all-rounder Shahid Afridi and Wahab Riaz, ended Pakistan’s hopes of victory.

Nevertheless, Pakistan’s captain, Misbah-ul-Haq was Mr Consistent as always, with 76 runs. While everyone was falling around him like a pack of cards, he showed excellent temperament, shot-selection and strokeplay.

In the post-match interview, Misbah said: “300 was get-able if you really batted 50 overs, all the batsmen. It could have been really achieved.

“We lost three quick wickets. At that time we were pretty much in the game. But after that I think we were nowhere.”

He added: “Now we have to just look forward. We really have to focus on the next one and try to win that to get momentum back and get confidence back.” 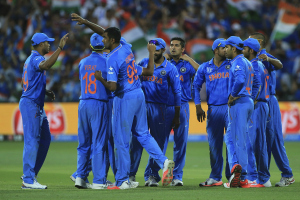 It was a fantastic day out for fans on both sides, who brought their cricket carnival to the city of Adelaide. Allegedly, up to 80 percent of the sell-out crowd in the Adelaide Oval were India and Pakistan fans.

Virat Kohli said: “The support today has been magnificent. It’s something we expect throughout the tournament. Thank you so much for the support, guys. We’ll keep working hard for you.”

It was a well-deserved win for India, who executed their game plan perfectly. After a poor run of form during the warm-ups, they will hope that they have now turned a corner, as they look for success in the campaign ahead.

Pakistan, who are known for their unpredictability, will look to improve on their performance. They are, no doubt, a talented team. And at their best are very exciting to watch.

Pakistan will expect to win their next match against the West Indies on Saturday 21st February 2015, at the Hagley Oval in Christchurch.

India play South Africa next on Sunday 22nd February 2015, at the Melbourne Cricket Ground. Cricket fans are excited at the prospect of a thriller in front of a 100,000 sell-out at the MCG!