India registers an emphatic eighty-nine runs victory against Pakistan on Duckworth-Lewis. Vice-captain Rohit Sharma was the star for the Men in Blue with a wonderful 140.

Indian made 336-6 in their fifty overs. In reply, Pakistan failed to make 302 in a match reduced to forty overs by rain.

The fiercest rivalry between the two teams took place at Old Trafford on June 16, 2019.

Pakistan skipper Sarfaraz Ahmed won the toss and decided to bat first. For India and Virat Kohli, it was not such bad toss to lose, considering Pakistan were weak chasers.

Pakistan made two changes in their side. Left-arm spinner Imad Wasim came in for the out of form Asif Ali.

Fast bowler Shaheen Shah Afridi made way for wrist spinner Shadaab Khan. Afridi’s exclusion was questionable because many felt the out of sorts Hassan Ali should have been dropped. 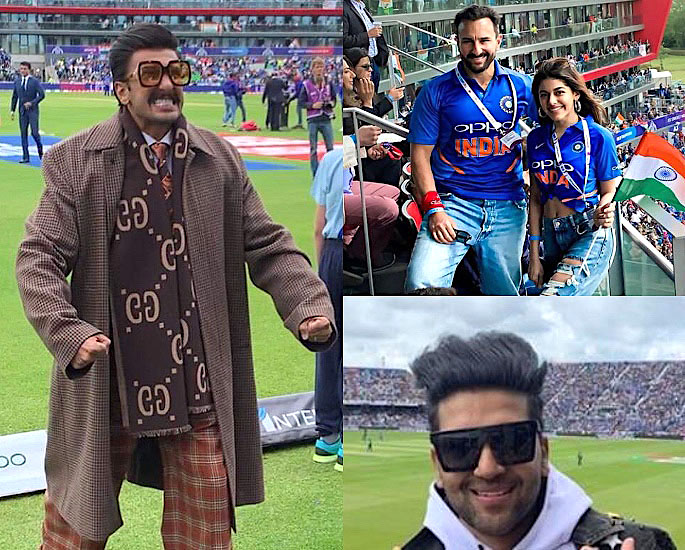 Fans had flown in from around the world, with billions watching on TV. There were many celebrities who were in attendance for this match including Bollywood actors Ranveer Singh and Saif Ali Khan, along with singer Guru Randhawa.

Master blaster Sachin Tendulkar was also in the stadium.

The players came out for their respective anthem, with the ultimate game following shortly afterwards. We highlight the game, including both innings in more detail: 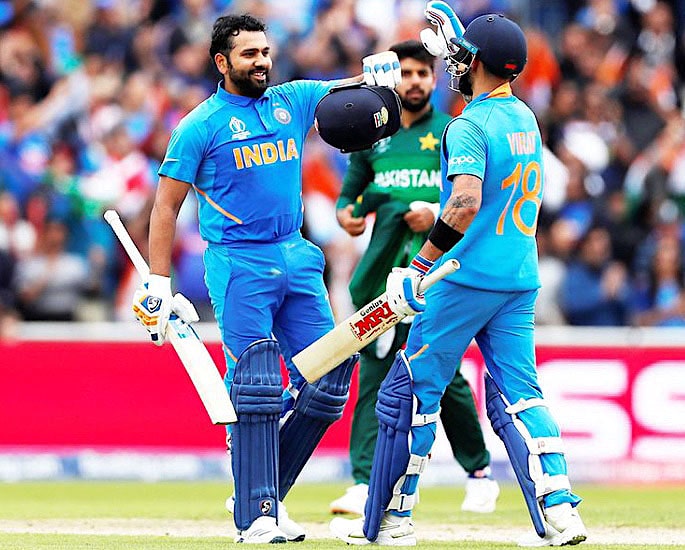 All eyes were on the Pakistan fielding as it was abysmal against India. Pakistan’s presence of mind was not quite there in the field yet again.

Rohit Sharma who came into bat with KL Rahul nearly run himself out. But lucky for Sharma and India, a clumsy Fakhar Zaman threw at the wrong end.

That reprieve gave India a start, which even they probably were not expecting.

India got to their hundred in the 18th over. A six from Sharma off Shoaib Malik brought up his fifty in the 22nd over.

Rahul (57) got out shortly after making his half-century. Babar Azam took an easy catch at short extra cover off Wahab Riaz. Pakistan final got a breakthrough after made an opening stand of 136.

Sharma made his 24th hundred in One Day International (ODI) cricket and second against Pakistan. His century came off just eighty-five balls.

Kohli was batting sensibly with Sharma taking singles and a few boundaries in between.

After accelerating his score, Sharma was eventually out, caught by Riaz at short fine leg off Ali for a terrific 140.

Hardik Pandya (26) did not stay long at the crease as Azam took a comfortable catch at long on off Mohammad Amir.

Mahendra Singh Dhoni fell cheaply for one, as he became Amir’s second victim, caught by Sarfaraz behind the stumps.

After a brief drizzle, Kohli met the same fate as Dhoni, getting out for seventy-seven. Kohli who did not take a review clearly was not out according to television replays.

Even though India lost late wickets, they got to a potentially match-winning 336 off their fifty overs. Despite Amir bowing well and picking three wickets, he did not get support from the other bowlers. 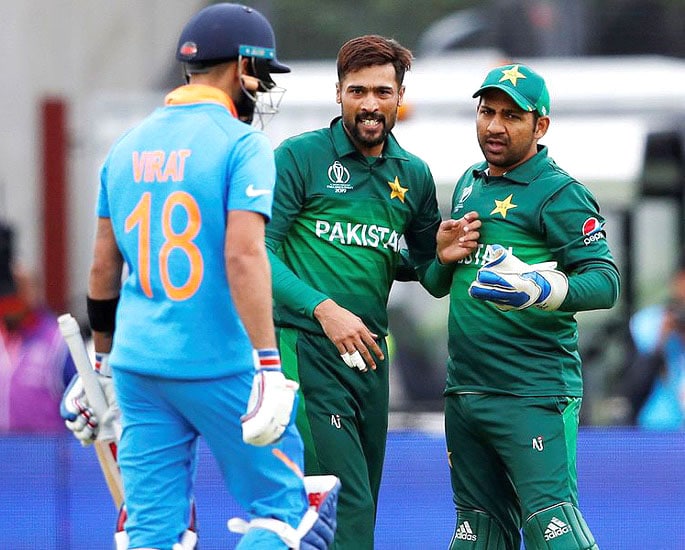 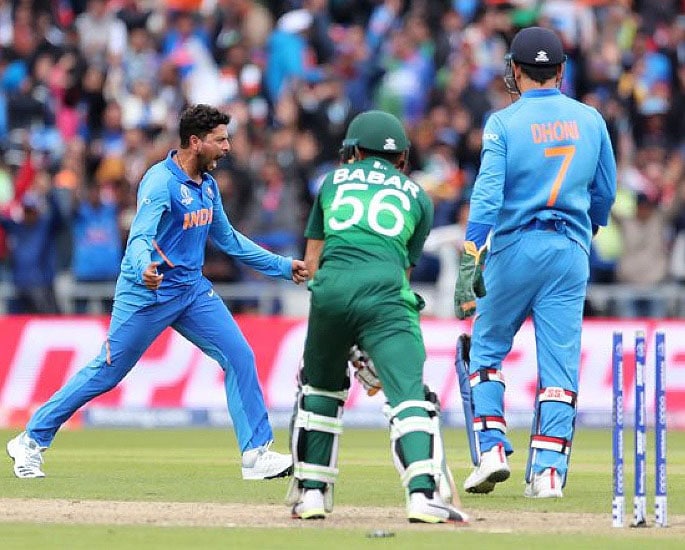 Pakistan got off to the worst start. Bhuvneshwar Kumar went off the ground midway through his over due to a hamstring injury. But this was a big slice of luck for India as Vijay Shankar got Imam-Ul-Haq lbw for seven.

After making a hundred partnership. Kuldeep Yadav got India a double breakthrough to send Pakistan on the brink of defeat.

In the 26th over, Pakistan went further into trouble when Mohammad Hafeez and Shoaib Malik were out on consecutive deliveries off Pandya.

A careless Hafeez found Shankar at deep square for nine. Malik was out the very next ball for a golden duck, getting an inside edge, which hit his stumps. 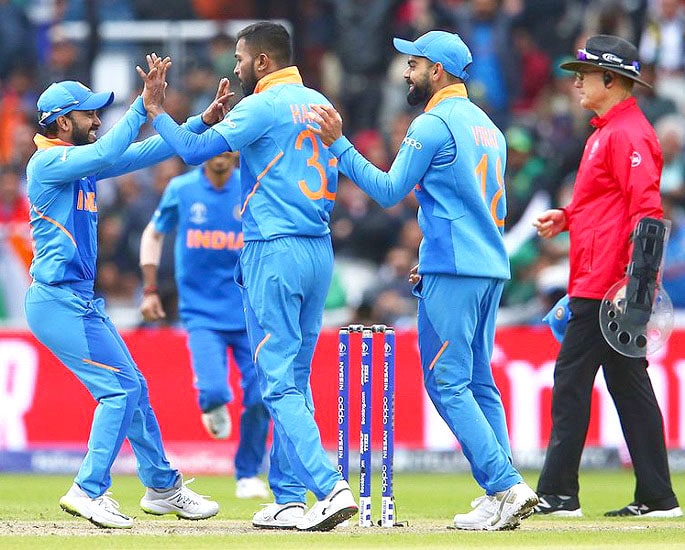 A demoralised Sarfaraz (12) was clean bowled by Shankar before the rain came to disrupt play once again. The players did return briefly on the pitch, with Pakistan requiring 130 runs off five overs. But that was never going to happen.

A dejected Sarfaraz spoke at the post-match presentation saying:

“We won a good toss but didn’t bowl in the right areas, and Rohit played very well. Our plan was to pitch the ball up to Rohit, but we didn’t execute it well. It was a good toss to win but we didn’t capitalise on it.

“Rohit’s knock was outstanding again. KL helped Rohit, who showed why he’s such a good ODI player again today. It was a team effort to get to 336.

“Kuldeep Yadav was brilliant. Babar and Fakhar were trying to play him out, but I wanted him to have a longer spell. The ball to dismiss Babar was an outstanding delivery.

“I think today was the best he bowled at this World Cup.”

Sharma who made the second century of 2019 Cricket World Cup was named man of the match. 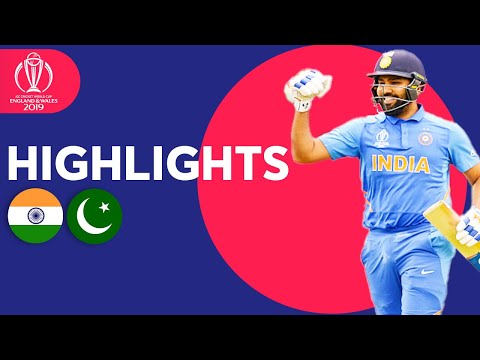 With this loss, Pakistan is virtually out of the World Cup, unless results heavily go in their favour. They will also need to win their remaining four matches.

Malik who has had a very poor tournament will surely be dropped from the final XI. An off-colour Hassan Ali will also struggle to find a place in the team. He has completely lost his line and length and been very expensive.

Meanwhile, India is on course to make the semi-finals with three wins out of four games.

DESIblitz congratulates India on their seventh victory against Pakistan in world cup matches.