Virat Kohli is Fastest Batsman to get 10,000 runs in ODI Cricket

Virat Kohli becomes the fastest player to reach 10,000 runs in One Day International (ODI) cricket. He reached the milestone in his 205th ODI.

“It is 54 less innings than the best player who got there."

Virat Kohli completed this amazing feat against the West Indies in Vishakpatnam on October 24, 2018.

Kohli beat the record insanely by 54 innings, previously held by Sachin Tendulkar. While Sachin got to 10,000 runs in his 259th ODI, Virat reached the same in his 205th match.

Kohli breached the mark set by Tendulkar in the 37th over, hitting a simple tip to long-on for a single off Ashley Nurse.

Tendulkar hit leg-spinner Shane Warne through the covers in an ODI match against Australia to make history.

This came during the 3rd ODI of Australia’s tour to India. The game took place at the Holkar Cricket Stadium in Indore on March 31, 2011.

With Virat overtaking the master blaster, Sachin went on Twitter to congratulate the Indian captain:

“The intensity and consistency with which you bat is just amazing. @imVkohli, congratulations on achieving 10,000 runs in ODIs. Keep the runs flowing.”

The intensity and consistency with which you bat is just amazing. @imVkohli, congratulations on achieving 10,000 runs in ODIs. Keep the runs flowing. pic.twitter.com/tQUhY8bHna

Sachin was not alone in praising the Delhi born batsman.

Fans and experts from the cricket world posted their thoughts on social media using Twitter handles such as #KingKohli.

Despite ten other cricketers reaching the landmark before him, Kohli is the fastest out of all them.
This proves what a force Virat, the “run machine” is in ODI cricket.

This is a monumental achievement by Kohli if we take into account all the previous generations who have played the sport.

Former Indian pacer Ajit Agarkar was all praise for Virat saying: “It is 54 less innings than the best player who got there. It is phenomenal.”

Even though the pitch at Vishakpatnam had a bit of juice for the bowlers it made no difference to Kohli. He came out in the middle as he always does before exploding in the end.

Virat made an unbeaten 157 off 129 balls in his record-breaking innings. He smashed thirteen 4s and four 6s as India scored a mammoth 321-6 in their 50 overs. This was the 35th century made by Kohli in ODIs.

The most amazing aspect to his game is the consistency. Only cricket greats have performed game after game.

Having seen a lot of cricket both as a player and coach, former West Indian opener Phil Simmons speaking about Virat said:

“It’s just incredible that he can be so consistent with the way he scores a hundred. He has a pattern to how he scores his runs.

“The thing that excites me the most is how he adjusts from the wicket 2-3 days ago. It just shows his attitude.”

But the amazing Kohi is a human after all. Towards the end of his innings, he was suffering from fatigue. 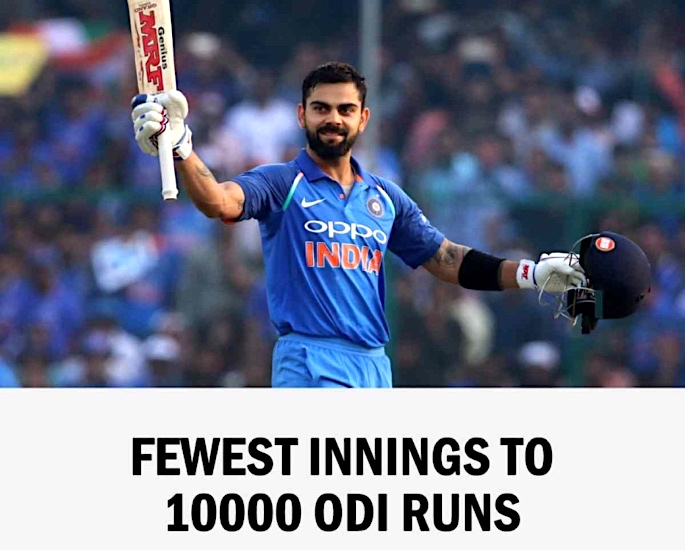 Besides Virat and Tendulkar, there are many former legends who have reached 10,000 runs in ODI cricket.

Kohli is the fifth Indian player and 13th overall to accomplish this target.

Even though ODI cricket is very friendly for the batsmen, this record will take some beating. It is far easier to pip shorter milestones in comparison to breaking records over a longer period of time.

This record is much more difficult to beat as it can only be achieved if someone plays at the same level Virat has been at since his ODI debut in 2008 against Sri Lanka.

The most striking feature about Kohli is his appetite to score runs each time he wears the blue colours of India.

He is such a player that once he gets in, he does not give many chances to the opposing side.

Bollywood actress and wife of Virat, Anushka Sharma went on social media to express her happiness. She put out heartful emoticons for her man on Instagram.

The next big target for Virat will be to surpass Sachin’s all-time ODI record. Prior to retiring in 2012, Tendulkar had made 18,426 runs in ODIs.

Former Sri Lankan wicketkeeper Kumar Sangakkara is in the second position with 14,230 runs. Retired Australian skipper Ricky Ponting comes in third with 13,074 runs to his name.

In the meantime, while everyone was lauding the heroics of Kohli, West Indies managed to tie the match. India leads the five-match ODI series 1-0.

A victory would have made it the perfect day for Virat.

Nevertheless, fans and the famous couple known as ‘Viruska’ will celebrate this extraordinary achievement.

Image courtesy of The Quint.