Sachin Tendulkar has reached yet another major milestone in the history of Test cricket by becoming the first player to pass 14000 runs. On the date of 10.10.10 the ‘Little Master’ showed the cricketing world his tremendous form for India against Austrailia.

"Every run I scored was cheered"

Sachin Tendulkar is the name in cricket that not many people have not heard of. With over a billion fans, he is one of the most highly regarded sportsmen in history with a huge list of achievements next to his name. And on 10th October 2010, Sachin was the first batsman to make 14,000 runs in the Test match against Austrailia in Bangalore, India.

Smashing a ball delivered by Nathan Hauritz through the covers and onto the boundary was the point when Sachin made the historical score in Test cricket.

For Tendulkar it was a thrilling milestone in his career, he said: “It was a big moment but I was most aware of the match situation.” Describing the moment to the Guardian, he said: “And then it flashed on the big screen that I needed eight runs to reach 14,000. Every run I scored was cheered. But when I needed two I hit a boundary. I was happy but I thought, ‘right, now we can get back to focusing on cricket’, because everyone had become too worried about those eight runs. It had taken away my focus.”

Sachin is known for his focus and humbleness, and this showed even after this record, as the crowds went buzurk, he looked up at the sky remembering his late father as he reflected his achievement in Test cricket since his debut in November 1989. Sachin has surpassed Brian Lara’s previous record of Test runs amd when quizzed about this, he replied, “Yes. Obviously, going past Brian Lara was something special. But I’m even happier now and hopefully it continues.”

“The last 20 years I have pushed myself really hard. Challenges are always going to be there for me.”

“All I need to do is to focus as hard as possible, work on my fitness, lead a disciplined life and use my body cleverly.” He added, “When I started playing, I didn’t think of all these things. God has been really kind. I’m enjoying every moment.”

Watch the historic moment when Sachin Tendulkar hit the 14,000 runs:

In the same game Sachin scored his 49th century and also went on to claim the record of most number of 150+ runs in Tests. Placing Sachin at the top with 20 of them now. The game ended with Tendulkar making a record breaking 14,017 runs in Test cricket. 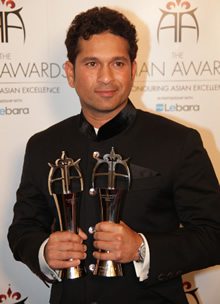 The biggest personal influence for Sachin Tendulkar is his late father, Ramesh Tendulkar, who was not a fan of cricket but a poet and writer. Sachin observed his father closely as he grew up and owes a lot to him for his own character and personality. Watching him allowed Sachin to grasp many things including how to behave and having a calm temperament. He says of his father: “He was very composed and I never saw anger in him. To me, that was fascinating.”

Today, Sachin’s family influence is his brother, Ajit Tendulkar. Sachin always approaches Ajit when it comes to issues with his batting. He says: “Ajit is absolutely the person I trust most when it comes to batting.” Ajit ensures that Sachin’s focus is on the game ahead and how to improve himself further.

As well as winning on the field, Sachin Tendulkar has also picked up some key awards celebrating his success as one of the worlds top cricket players. He won the ICC Player of the Year award for 2010. At the Asian Awards ceremony in London, Tendulkar was given the award for ‘Outstanding sporting Achievement’ which was presented to him by England cricketer Nasser Hussain OBE, and the ‘Lebara People’s Choice’ award, which was presented to him by Ratheesan Yoganathan, the CEO of Lebara.

Sachin Tendulkar has shown longevity in his career and proved that by working hard and always keeping a solid honest focus on your goals gives you a definite return. As a role model to Indians and South Asians world-wide, the ‘Little Master’ is definitely in a unique league of his own.

Baldev enjoys sports, reading and meeting people of interest. In between his social life he loves to write. He quotes Groucho Marx - "The two most engaging powers of an author are to make new things familiar, and familiar things new."
India wins Gold, Silver and Bronze
IPL corruption tarnishes Cricket