The India Premier League has been one of the most dynamic and exciting additions to the world of Cricket. However, with recent corruption allegations and teams being expelled from the tournament, the IPL has become yet another dissapointing fiasco for cricket fans.

Criminal charges are being brought against Modi

Far from redeeming itself, the world of cricket seems to be getting murkier, as accusations surrounding the Indian Premier League further tarnish the sports international image.

Cricket, and South Asian teams in particular, have been getting a bad press of late. The scandal surrounding Pakistan’s team about spot-fixing has still not been resolved, and now there are allegations of corruption, money-laundering and tax evasion in the IPL. Two teams have been expelled and Lalit Modi, founder of the IPL, has had his chairmanship suspended and a criminal case brought against him by the Board of Control for Cricket in India.

The two teams at the centre of the trouble are the Rajasthan Royals, who won the inaugural IPL title in 2008, and the Kings XI Punjab. Both teams had their licences terminated by the BCCI in October 2010. A third franchise, Kochi, is also under scrutiny because of disputes regarding its ownership shares.

Since its first season in 2008, the IPL competition has become one of the most lucrative events in sport. It is a domestic professional Twenty20 competition, and players from a range of different countries make up the teams. 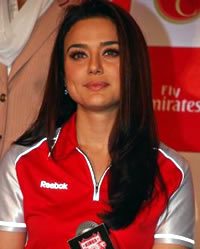 Team owners of the disqualified teams are Bollywood star Shilpa Shetty, who was a contestant on Celebrity Big Brother in 2007, and ‘Veer Zara’ Bollywood actress, Preita Zinta. The shock of the news of the two teams being removed from the IPL has hit the two starlets hard.

Preity Zinta tweeted on her Twitter account saying: “Still absorbing the News! After working so hard in the IPL & putting my everything building this team dis is not what I expected! Shocked!”

Reacting to the news, Shilpa Shetty said on her Twitter account: “This is 4 all those who want my reaction” Honestly too shocked to react,just disheartened..cause its more than just a team 4 us!Still hav …” and then later said: “our Books are Clean and Legal,and I would challenge anyone who says otherwise.which is y we r shocked!” 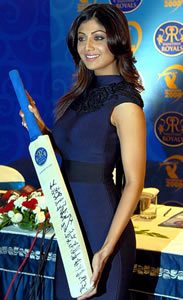 Also, Shane Warne Austrailian cricketer and the captain of the Rajasthan Royals could not believe the news, he tweeted Shilpa Shetty on Twitter, saying: “hey Shilpa, please keep me posted if you hear anything , such sad news for us and our loyal fans, shattering for all !!!”

The teams are decided through an auction process, with each team allowed to spend no more than USD9 million on players, and only able to keep four players from the previous season in their new squad. The player auction for the fourth season in April 2011 was supposed to be this month, but the whole thing has been thrown into disarray by the team expulsions and accusations.

Cricket commentators and experts in the field are worried that this could spell the end of this popular tournament. Raj Kundra, Shilpa Shetty’s husband, who co-owns the Rajasthan Royals and is based in the UK said:

Kundra team is appealing the BCCI’s decision and pursuing legal action, however the court date has been postponed several times. According to the BCCI the team’s transgressions threatened to “shake the very foundation of the tender process.”

As yet the Kings XI Punjab has not sought legal action, however the team is trying to negotiate a settlement with the BCCI. 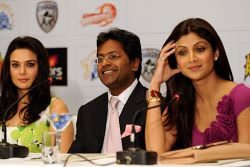 Lalit Modi, founder of the IPL and former chairman, has been based in London since spring this year. Criminal charges are being brought against Modi by the BCCI, and if he returns to India he will be arrested. The celebrated “Don King of cricket” has been in the press throughout the year for various allegations, including fraud and corruption. Although he is not officially in hiding he has no plans to return to India and is accompanied by bodyguards on the rare occasions that he appears in public.

On October 15th a “look out circular” for Modi was issued by the Indian authorities to security personnel at border control points. Mahmood Abidi, Modi’s lawyer, recently told India Today magazine: “Lalit has [a] valid reason to not return to India because of an elevated threat to his life here.”

These developments are only further sullying the sports reputation, which was marred previously this year by the spot-fixing allegations surrounding the Pakistan team. Cricket may be a lucrative sport, but it is in severe danger of losing all credibility if it does nothing to clean up its act fast. The recent headlines do nothing but detract from the talent and skill of the professionals, and ultimately ruins the game for fans as well.

Do you have confidence in the IPL anymore?

Roz is a writer who has travelled extensively in South-East Asia and Europe. Her passions are learning about different cultures, learning foreign languages and meeting new and interesting people. Her motto is "a journey of a thousand miles begins with a single step."
Sachin scores historical 14,000 runs
Amir Khan defeats Marcos Maidana