Sachin Tendulkar has broken the world cricketing record in an ODI between India and South Africa. He has become the first player to ever score a double century.

I do not play for records

Sachin Tendulkar has broken the world record by being the first individual in One Day International (ODI) cricket to score 200 runs, a double century.

The match at the Roop Singh Stadium produced an electrifying atmosphere as Tendulkar hit a return to Charl Langveldt’s third ball of the 50th over, and scampered for a single to make his record breaking 200th run. The crowd erupted, non-striker Mahendra Singh Dhoni and the South Africans walked up to congratulate the Sachin, and his team-mates in the pavilion were up on their feet. 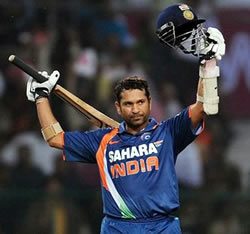 Tendulkar’s innings were highly impressive and was awarded Man-of-the-Match for his one-man show of such a tremendous score. He faced just 147 balls hitting three sixes and 25 fours. A strike rate of 136.05 positioned Tendulkar higher than any of the other innings on the list of top ten scores one-day international scores.

Tendulkar, known to fans as Little Master, also made his 46th ODI century in the match, which is the most by any batsman. The 36-year-old Indian legend already has a world record 13,447 runs in Test cricket and holds the record for most centuries in Test cricket. So, this is yet another example, of the unstoppable Tendulkar being at the top of his game.

In an interview after achieving the great record, Tendulkar said,

“I’d like to dedicate this double-hundred to the people of India for standing behind me for the last 20 years throughout the ups and downs.” 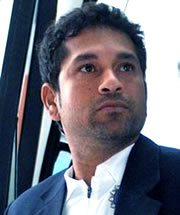 He added, “I felt that when I was 175-plus and it was the 42nd over I had a chance, but I wasn’t actually thinking of it. It was only when I got closer to it that I thought about a double hundred.”

Records have come naturally to Tendulkar and now only Brian Lara’s 400 in a Test match waits to be broken by him. Tendulkar said of his record, “No record is unbreakable. But I would be happy if an Indian breaks my record,” he said and added, “I do not play for records. I enjoy my cricket and I play with passion. I have done this for 20 years.”

Tendulkar has been the dominant figure in cricket for more than two decades, making his first appearance at the young age of 16 at international level. In the 1996 World Cup, he was the leading run scorer. And now, he is the first batsmen to hit a double century in a one day game. This is a huge achievement in its own right and by no means his final, because Sachin Tendulkar seems to be maturing like a good wine, and getting better and better with time.

Baldev enjoys sports, reading and meeting people of interest. In between his social life he loves to write. He quotes Groucho Marx - "The two most engaging powers of an author are to make new things familiar, and familiar things new."
India rank 1st in Test Cricket
Pakistani Cricketers banned