Sachin Tendulakr the world renowned cricketer has started a new innings as an Indian MP. He was sworn in as a Rajya Sabha Member of Parliament after being nominated for the role.

"Whatever I am today is because of cricket"

Sachin Tendulkar India’s most famous cricketer has now taken an interest in politics by being sworn in as a Rajya Sabha Member of Parliament.

The nomination for Sachin was made by the government on 27th April 2012. Accepting the nomination, he took oath in Hindi, in the chamber of the Rajya Sabha chairman, Hamid Ansari, since Parliament is not in session.

The Upper House, or Rajya Sabha, has 250 members with six-year terms, most of whom are elected. Tendulkar, aged 39, is among 12 nominated members chosen for their expertise in specific fields.

Sachin couldn’t take oath during the Budget Session due to the IPL. 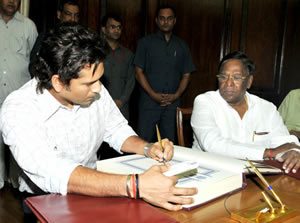 Sachin made it clear that his focus would be cricket and hinting at concentrating on Parliament work after he stops playing the game.

However, he hastened to add that he does not want rumours circulate that he has stopped playing cricket for Parliament.

“I am here because of my cricketing career. I cannot take any focus away from my cricket. That is where it all started for me. I will focus on my cricket and as and when I stop playing cricket, I don’t know, when I will start attending to other things.

“I don’t want rumours to start that I have stopped playing cricket. I will let everyone know when I will stop playing cricket,” he told reporters as he and wife Anjali were chaperoned by Shukla to Rajya Sabha Chairman Hamid Ansari’s chamber. 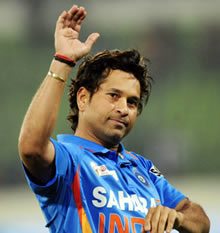 There was much excitement in the corridors of Parliament as a large number of officials gathered outside Ansari’s chamber where Tendulkar took oath. A number of Parliament staffers took out their mobile phones to capture a glimpse of the cricketer.

After taking oath, Tendulkar said it was a great honour for him to be nominated as a Rajya Sabha member by the President. He said the Rajya Sabha nomination has put him in better position to help not only cricket but also other sports in the country.

Sachin made it clear that he was a nominated member of the Rajya Sabha and had not sought to be a member and therefore, devoting time to parliament would have to be balanced with his cricket.

“See, I am a nominee. So, I didn’t go to anyone to say that I want to become a Rajya Sabha member. It is an honour which I accept with full respect but I am here because of my cricketing career,” said Tendulkar.

Tendulkar said cricket had given him many things in life during the 22 years. He has played the game he loves and he had always dreamt of giving something back to cricket in the latter half of his life. “Whatever I am today is because of cricket and I strongly believe that, said Sachin.

“Today, with the nomination as Rajya Sabha member, I think I am in a better position not only to help cricket but also other sports in the country which is really important and means a lot to me. And I will try my best to help other sports.”

Stated the Little Maestro as explained how he wants to play a role in Parliament. 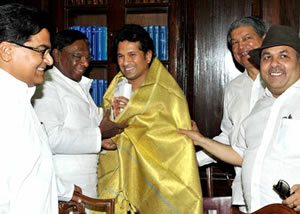 “But I believe there might be few obstacles along the way and a few challenges along the way. And I need help from my fellow parliamentarians, the administrators, media and our countrymen. I think, together we can make a lot of changes,” Tendulkar said.

Not everyone seems to be happy with the appointment though. An online poll by the Hindustan Times revealed 68 percent of respondents did not want to see Tendulkar in parliament. An editorial in the Times of India labelled Tendulkar’s nomination a populist move that made “little sense.” Stating that Tendulkar’s cricketing duties kept him on the road for 216 days last season and nominating an active sportsman “defeats the purpose” of choosing eminent people who can enrich parliamentary debate.

As a newly-elected Rajya Sabha member Sachin was offered a bugalow which was alloted to him as part of his new appointment. However, he refused to stay in the bungalow, saying he does not want to waste tax payers’ money.

“I am not keen on staying in any government bungalow when I will be in Delhi for only a few days. I feel this would be a waste of tax payers’ money and it would be better if the bungalow is allotted to someone else who needs the bungalow more than me,” he said.

The cricketer said that he would prefer to stay in a hotel in Delhi. “For me the honour of being nominated as a Rajya Sabha MP matters much more than the perks and privileges like being given a government bungalow,” added Tendulkar.

The cricketer said he would like to be remembered as someone who contributed to all sports in the country and not just by his cricket statistics.

Sachin Tendulkar is a huge role model for Indians all over the world and his contribution to cricket is immense. Now, the spotlight will be on him as an Indian MP to see what change he can bring to sports, since he has accepted the oath as a Rajya Sabha member.

Baldev enjoys sports, reading and meeting people of interest. In between his social life he loves to write. He quotes Groucho Marx - "The two most engaging powers of an author are to make new things familiar, and familiar things new."
Euro 2012 Football Racism Fears
Amir Khan loses title to Garcia