Amir Khan devastatingly lost his WBC and WBA belts to American boxer Danny Garcia, who floored the Bolton boxer three times during a four round match. Las Vegas staged the fall of Khan which was a shock to fans and followers everywhere.

"I respect Danny, he was countering very well against me"

Amir Khan, the British Asian boxer, for the second successive time in his career lost his fight. Underdog Philadelphian Danny Garcia produced a devastating result for Khan when the referee called the fight off in the fourth round with Garcia declared champion.

This is a tremendous blow and setback for Khan, who went on an over-confidence media hype before the fight saying Garcia would be shocked with his strength and punches, completely underestimating Garcia’s ability in the ring. 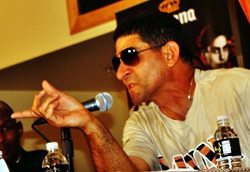 Angel Garcia, Danny’s father and trainer, before the fight called Khan an “overrated” fighter and proclaimed that he has “never, ever, ever in my lifetime, that I’ve been living 49 years, I ain’t never met a Pakistani that could fight.” This statement attracted response from Khan’s camp with Amir saying: “I’m not going to leave him standing there – I’m not getting paid for overtime.”

Crowds at Mandalay Bay in Las Vegas USA and television audiences world-wide witnessed Khan get mauled by Garcia, who re-enforced his father’s statement. The fight and tactics of Khan were completely out classed by Garcia. Khan was caught out and didn’t expect Garcia to fight the way he did as the rounds went on.

The fight started with Khan in control of the early action in the ring and Garcia was trailing with cut over the eye. The first two rounds were building up to a shock contest for Khan when the fight exploded in the third round. Towards the end of the round, a left hook from Garcia floored Khan hard, who was given the eight count and staggered to his feet quickly. 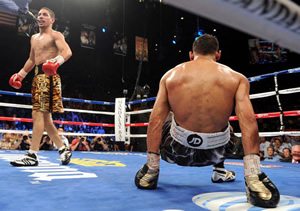 The fight was allowed to carry on by referee the Kenny Bayless as Amir looked bemused by what happened and then another strong right and left from Garcia resulted in Khan struggling, as the bell rang.

The minute break before the fourth round invigorated Khan to strike back but Garcia was not going to take it. He threw massive power shots with a victory in mind. A right hook from Garcia then had Khan down again, scrambling on the rope.

A burst of energy then returned in Khan trying to survive the setback and he began hitting back with both fighters exchanging vigorous punches.

With Khan wanting to get back in control, suddenly with 40 seconds to the bell, Garcia threw a well targeted left and then right to the temple of Khan’s head, crashing him to the floor again, for the third time. Again, Khan got up quickly, but by now the referee decided enough was enough after looking at Khan’s eyes and despite his reaction saying “I’m okay.” Declaring Garcia as the winner of the fight.

Post match conversations with the boxers said it all.

Amir Khan admitted to defeat by the better opponent. “It wasn’t my night,” said the Bolton fighter. “After watching the replays a little bit I thought I was coming in with my hands down and Danny took advantage.” “I respect Danny, he was countering very well against me,” added Khan.

Garcia, who has now won 24-0 boxing matches with 15KOs said: “I always knew I was going to win this fight and I’m now a unified champion at 140lbs.”

“I needed a great fighter in front of me to show how good a fighter I am. Now everyone knows. I’m a killer. I will fight anyone, anywhere, anytime.”

Freddie Roach, Amir Khan’s trainer admitted that Khan let the remark’s of Garcia’s father get to him. And evidently cost him the fight. “The plan was to counter punch, use the jab,” he said, “But Mr Garcia got under his skin, and his heart got in the way. Amir says he will be back. Hopefully Garcia will come to England and we will fight him over there.”

After the fight, Khan was to hospital for a precautionary scan.

Before losing his WBC and WBA light-welterweight belts to Garcia, Khan had his mind set on his ultimate goal to take on taking on the world welterweight champion Floyd Mayweather. The chances of this are now very slim and there is no prospect of a rematch with Danny Garcia. At a post-match press conference, Angel Garcia, Danny’s father interrupted his son and said “We are not giving him a rematch. Why should we fight someone who we just beat man? We are looking at bigger things in life.” 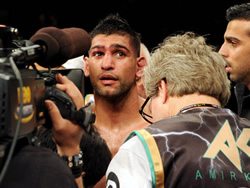 Khan tweeted on Twitter on 15th July saying: “Can I apologize to my family friends and everyone. I got caught with a shot and I know millions of u are upset but that’s boxing for u”

Golden Boy’s Richard Schaefer is totally behind Khan and feels his career is no way over due to the fight. “He left himself open and that one punch changed the fight but I can tell you that one punch did not change and will not change Amir Khan’s career,” said Schaefer. “He’s 25 years young and has great fights ahead of him,” he added.

Now the question to be answered is how long will it take Khan to revive himself after this massive defeat. Many think it will hit him very hard and he will find it hard. Others feel this is something that will make him stronger. He cannot fight title fights until he proves he is ready to re-engage with champions of Garcia’s calibre and this will mean fighting lesser known opponents which might take a toll on Khan’s mindset for some time.

Baldev enjoys sports, reading and meeting people of interest. In between his social life he loves to write. He quotes Groucho Marx - "The two most engaging powers of an author are to make new things familiar, and familiar things new."
Sachin Tendulkar now an Indian MP
London 2012 Olympic Games