The Coronavirus has resulted in lockdowns, however, 20 people defied UK lockdown rules by having a BBQ, resulting in the police having to stop them.

On March 24, 2020, police in Coventry were shocked to discover that at least 20 people were ignoring UK lockdown rules by having a BBQ.

Despite the government’s clear instructions on social distancing, the large group disregarded the advice.

Neighbourhood officers had been on patrol in Foleshill Road just after 2 pm when they smelt food cooking and smoke rising near flats in Culworth Court.

They went to see what was going on but were shocked to discover a group of around 20 people.

The group included a toddler and people estimated to be in their 60s. They were freely conversing and standing shoulder-to-shoulder around a buffet which had been set up near some garages.

The officers told the group it was unacceptable and they needed to abide by the social distancing guidelines to help slow down the spread of Coronavirus.

However, the group refused and began protesting about how they should be allowed to continue their barbeque.

One woman shouted “my children need to eat” but when she was questioned why she was not cooking for them at home, she could not give an explanation.

The matter came to an end when the officers tipped over the BBQ and dispersed the group, telling them to return to their homes.

“Unbelievably, we’ve just had to deal with 20+ people having a BBQ!!

“Please listen to government advice else this will get worse and will last longer!!”

West Midlands Police has stated that it is vital that everyone follows the UK lockdown rules, insisting that they are essential and will save lives. 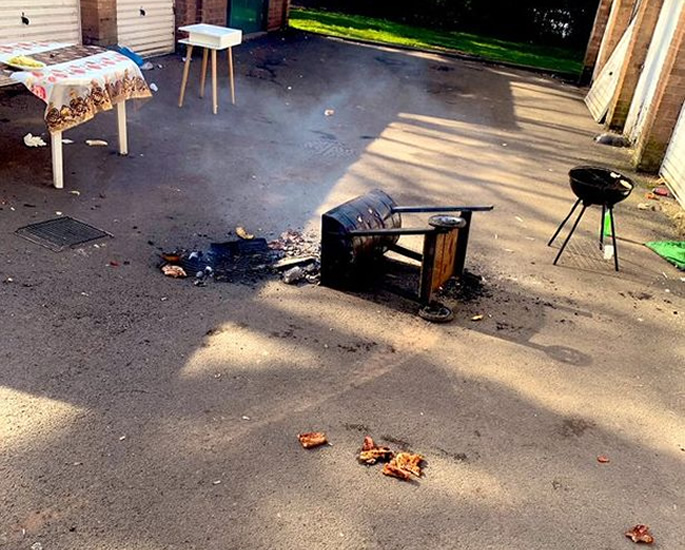 Officers will be out in communities and speaking from a distance to anyone they suspect is breaching the new guidelines.

If the advice is ignored, then officers will enforce the rules.

The blatant disregard for the rules came less than 24 hours after Prime Minister Boris Johnson announced a lockdown and urged people to stay at home.

Mr Johnson said that people would only be allowed out for the following purposes:

During the announcement, Mr Johnson described Coronavirus as “the biggest threat this country has faced for decades”.

He said police would have the power to issue fines to those breaching the rules, however, forces have said they will attempt to use reason in the first instance to get people back home if they are out without good reason.

Dhiren is a journalism graduate with a passion for gaming, watching films and sports. He also enjoys cooking from time to time. His motto is to “Live life one day at a time.”
Couple reveal Anguish over Wedding Delay due to COVID-19
Amir Khan offers his Wedding Venue to NHS during COVID-19