The 2010 Commonwealth Games have made history for India with wins by their athletes in events which were not accomplished in past games. Notably, the women’s discus event clinched all three medals for India making the three winners, Krishna Poonia, Harwant Kaur and Seema Antil household names.

"I dedicate this medal to all the Indians."

History was made at the 2010 Commonwealth Games in New Delhi in India. India’s women athletes won all three medals in the Women’s Discus event in front of humongous support at the Jawaharlal Nehru stadium. Krishna Poonia won gold, Harwant Kaur won silver and Seema Antil won the bronze.

After the troubled start with problems of accommodation and hygiene at the athletes village, the Commonwealth Games in New Delhi have provided competition, thrills and excitement for all the nations taking part, and for the first time, India have won all three medals in the track and field events.

Krishna won her gold by throwing the discus to 61.51m. This was the first gold since ‘Flying Sikh’ Milkha Singh’s 440 yard race in the 1958, when he won gold at the Commonwealth Games held in Cardiff, Wales, UK.

Kirshna Poonia has become the first women in India to win a gold medal in the discus event. 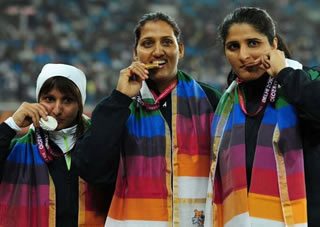 Krishna Poonia is from from the Gagarwas village in Churu district in Rajasthan in India. The 33-year old athlete is coached by her husband Virender Poonia. She won bronze medal in 2006 at the Doha Asian Games. She represents her sponsor Indian Railways in national tournaments. Poonia finished 5th at Melbourne Commonwealth Games in 2006 and now after winning her first gold is aiming to produce a similar performance at the 2010 Asian Games in China.

Krishna said after her win: “I dedicate this medal to all the Indians.” She added, “With this I think we wiped out everything bad that was happening before the Games and came out united.”

Seema Antil winner of the bronze, in the past has won the silver medal at the 2006 Commonwealth Games. The 27 year old was honoured with Bhim Award by the Haryana state government on 26 June 2006. 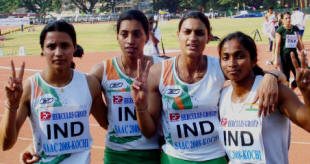 A huge finish to the women’s track events for the games was displayed in the Women’s 400 metre relay race, where India triumphed by winning gold. Winning some of the top women runners in their class, the relay team consisting of Jauna Murmu, Ashwani AC, Manjeet Kaur and Mandeep Kaur. They showed their metal and determination exchanging batons and it was Mandeep Kaur who ran with vigour way in front on the Nigerian to the finish, making history for India with a national record. A tremendous result for India with the crowds totally mesmerised and buzzing by their performance. 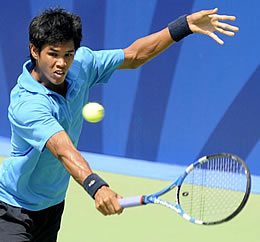 Tennis was another event where India won gold. Somdev Devvarman won the Men’s Singles gold in the Commonwealth Games tennis tournament, defeating Australia’s Greg Jones 6-4, 6-2. Devvarman’s win over-shadowed the non-winning performances of India’s star-studded team which included Sania Mirza, Leander Paes and Mahesh Bhupathi, who failed to win any gold medals. Devverman said: “People underestimate how tough it is to get a gold medal. I worked really hard this week. I am really happy.”

Sania Mirza with the crowd totally behind her in the Women’s Singles final against Australia’s Russian-born Anastasia Rodionova, ended in a nail biting finish, where Mirza was so close to gold but ended up winning the silver medal.

Sania said after the match: “I am happy that I have played so many matches in the past week. The best part is that I am injury-free. That is something you can’t control and is a part and parcel of a professional sportsperson’s career. I would have loved to win a gold medal in singles. But when you go into a tie-breaker in the decider, it’s more about luck than your game.”

For individual achievements, Kavita Raut became the first Indian woman to win a medal in track running events at the games when she won the bronze in the 10,000 metres.

Baldev enjoys sports, reading and meeting people of interest. In between his social life he loves to write. He quotes Groucho Marx - "The two most engaging powers of an author are to make new things familiar, and familiar things new."
The Mess of Pakistani Cricket
Sachin scores historical 14,000 runs