At the Paralympics 2012, on Monday 3rd September, Nagarajegowda used a scissors technique to sail over the 1.74-meter mark in his second attempt in the F42 final, becoming the sixth ever Indian to claim a Paralympic medal.

After a disappointing first week for India at the Paralympics, with shooter Naresh Sharma and swimmer Sharath Gayakwad unfortunately failing to advance to the finals of the men’s 10-meter air rifle competition and the men’s 50-meter freestyle event, Girisha Hosanagara Nagarajegowda’s silver medal brought home cheer.

Although Delana finished on the same height of 1.74m as Girisha and Mamczarz but won gold on the basis of taking less jumps.

Suffering from leg impairment, he is the first Indian to bag a medal in a high jump Paralympic competition, jumping a personal best. The 24-year-old athlete is also only the third Indian after javelin thrower Bhimrao Kesarkar and shot put thrower Joginder Singh Bedi to claim silver at the Games.

Six months earlier, Girisha had quit his bank job to focus fully on his training, and the other two medal winners – gold winner Iliesa Delana of Fiji and Lukasz Mamcarz of Poland – all cleared the same height but Girisha lost the gold on count back.

Though the Indian cleared it on his second attempt and went past 1.74m on his first attempt, Delana had already clinched the gold having cleared all the heights on his first try. Both Girisha and Delana tried to scale 1.77m but failed.

Girisha said “It is a dream come true. I was in New Delhi to meet the President when Sushil Kumar won the silver medal and his performance motivated me. In fact, I felt motivated whenever I saw an athlete winning a medal at the Olympics,” Girisha told TOI from London as he got ready for the medal ceremony.

The star athlete said his training in SAI South Centre alongside Olympian Sahana Kumari, under the guidance of Russian coach Evgeny Nikitin, gave him a lot of confidence.

“I knew I could win a medal if I managed my best. The training at the SAI centre helped me a lot and Sahana also had a big role – she called me last night to give me tips,” Girisha said.

“I never expected my son could do this. When he was a kid, the doctor told me he needed a surgery to correct his disability but I got scared and refused. It was also because we couldn’t afford the costs of the operation. But now I know I made a huge mistake. And look at him, he has made proud with his achievement,” Nageraje said, tears welling up in his eyes.

“We couldn’t support him well as we are repaying a bank loan of Rs 3.50 lakh taken for my daughter’s marriage and for building a new house. At times we even struggled to make ends meet but I can forget all that. This victory has given us a lot of happiness.” 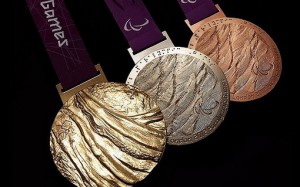 Girisha’s heroic feat helped India jump to 53rd place in the medal’s tally. China is leading with 116 medals (48 gold, 32 silver and 36 bronze). Russia is in second place with 74 medals, 29 of those being gold, then thirdly Great Britain being third, with 29 gold medals, and a grand total of 96.

India finished the Paralympics with one silver medal.

For Great Britain, wheelchair rugby player Mandip Sehmi and his teammates bounced back from their defeat to the USA earlier this week by beating France 57-50 in their second game of the Pool Phase Group A, Josie Pearson won Great Britain’s 10th athletics gold, breaking the F51 world record three times in the F51/52/53 discus, and Josef Craig wins gold in the 400m freestyle, breaking his own World Record.

All the 10 athletes underwent training in India and a special acclimatisation coaching camp was conducted at Balisdan Sports Village, London, U.K.

With India not being highly recognised for disability in Sport, the Paralympics could come as a huge eye opener for the future, hopefully helping to develop new disabled athletes for upcoming sport events.

The Closing Ceremony was a big one just like the Olympic Games Closing Ceremony, it was a spectacular event. The London Paralympics sold 2.7 million tickets in total, almost 900,000 more tickets than Beijing four years ago and the unprecedented sales brought in nearly 45 million pounds ($72.12 million), exceeding organisers’ original target of 35 million. 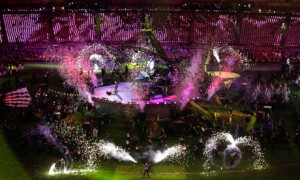 Channel 4 had aired 400 hours of the Paralympics in the UK. For the Closing Ceremony, a peak audience of 7.7 million people had tuned in to watch.

World wide success Coldplay headlined the event, with the likes of Rihanna and Jay-Z supporting. “Being asked to play at the Paralympic closing ceremony in our hometown is a huge honour,” Coldplay said. “We can’t actually imagine a bigger honour.”

“On August 29, we opened with the theme of ‘Enlightenment,’” said Sir Philip Craven, president of the International Paralympic Committee. “Tonight, we are enlightened and armed with a superior knowledge of what can be achieved. The legacy of these games will be long-lasting.”

“Being at the Paralympics is the biggest honour,” said Rihanna, dressed in a flowing orange gown. “These athletes are gladiators and are a true inspiration to me.”

The ceremony was to finish with the cauldron made up of 200 petals being extinguished, ending the games in London and passing the baton to Rio de Janeiro for 2016.

So with the 2012 Games officially closed, it’s been an incredibly intense event, and a huge success. Athletes have done themselves and their countries proud, whether they won a medal or not they participated and can return home as true Olympians.

Rachel is a creative and focused person who has a vested interest in unique beauty and fashion with an eye for art. She loves finding out more about the world through her writing. Her motto is 'You cannot open a book without learning something."
London Paralympics 2012
Twenty20 Cricket World Cup 2012