The Paralympic Games are an international multi-sport event, where athletes with physical disabilities compete. For 2012 the sporting event is being held in London with paralympians arriving from around the globe to take part.

There are six categories in which the athletes compete

London 2012 Olympic Games created a huge patriotism across the nation from breaking world records to winning performances and many more moments worth remembering. It already seems so long that we as a nation came together and witnessed a truly spectacular Olympic Game. Luckily, we get to enjoy all the action with the 2012 Paralympic Games on 29th August 2012.

The Paralympics have developed from a small gathering of British World War II veterans in 1948 to become one of the largest international sport events by the early 21st century. The name “Paralympic” is believed to be originated it from the Greek preposition ????, pará meaning beside or alongside and consequently refers to a competition held in parallel hence the Olympic Games.

There are six categories in which the athletes compete. The categories are: amputee, cerebral palsy, intellectual disability, wheelchair, visually impaired, and Les Autres meaning “The Others”, these are athletes with disabilities that do not fall into the other five categories; these include dwarfism, multiple sclerosis, and congenital deformities. Then the categories are further broken down into classifications, which vary from sport to sport.

“Spirit in Motion” is the motto for the Paralympic movement. The symbol for the Paralympics contains three colours, red, blue, and green, which are the colours most widely represented in the flags of nations. The colours are each in the shape of an Agito which is Latin for “I move”. The three Agitos circle a central point, which is a symbol for the athletes congregating from all points of the globe.

Great Britain co-hosted the 1984 Summer Paralympic games and the games were officially opened by Prince Charles. The games were originally intended to be held in Illinois, United States however, due to financial issues, Illinois passed the hosting games to 2 separate countries, Stoke Mandeville, United Kingdom and New York, United States. This will be a momentous occasion for the United Kingdom as the country will solely host the Paralympics Games. The games will officially be opened by the Queen. This will be the first time that Paralympic Games have been opened by Her Majesty the Queen.

The London 2012 Paralympics games will be the fourteenth Paralympics held and will take place between 29th August and 9th September 2012. It is the second largest multi-sport event ever held within the United Kingdom after the 2012 Olympic Games.

As with the Olympics, the 2012 Summer Paralympics are overseen by LOCOG and the ODA (Olympic Delivery Authority). The LOCOG are responsible for overseeing the staging of the games, while the ODA deals with the infrastructure and venues.

The 2012 Summer Paralympics will use many of the same venues as the 2012 Summer Olympics, furthermore, we will see some new venues such as Brands Hatch for road cycling and Eton Manor for wheelchair tennis. The Olympic venues and facilities are designed to be accessible so they could accommodate the Paralympic games.

There are 20 sports and a total of 21 disciplines being featured in the London 2012 Olympic Games. These are:

Approximately 150 nations will be participating in the games. An estimated total of 4,200 athletes are expected to compete in the Games. 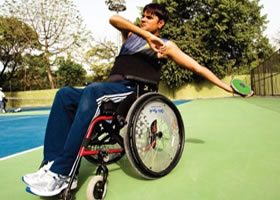 India has sent Paralympic athletes to compete in Powerlifting, Swimming, Athletics and Shooting. Pakistan is taking part in Athletics and Sri Lanka has competitors in Wheelchair Tennis and Athletics.

For Team GB, Mandip Sehmi, 2 x European Champion Gold Medalist will be playing Paralympic Wheelchair Rugby. Sehmi from Warwickshire suffered a spinal cord injury in 2000 after a car crash. He was just 19 years old. The incident left him paralysed from the chest down.

Mandip then met Bob O’Shea, former captain of Team GB’s Paralympic Rugby side whilst recovering at the Stoke Mandeville Hospital. Since then he has dedicated his life to becoming one of the country’s top wheelchair Rugby players. 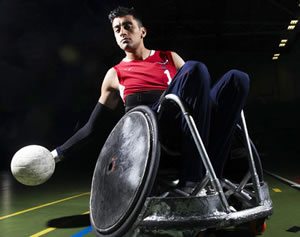 In 2007, Mandip won his second gold medal at the European championships. Sehmi was placed fourth at the 2008 Beijing Paralympic games and represented Great Britain in 2010 World Championships in Canada. This was a huge progress for Great Britain as they finished in 6th place previously the GB Team was ranked ninth.

Cadbury is contributing to the Paralympic Potential days to encourage future athletes to see if they have the potential and albilty to become one of GB’s future stars. Mandip Sehmi has become an ambassador for Cadbury.

The Paralympic Games were designed to emphasise the participants’ athletic achievements, not their disability. The movement has grown dramatically since its early days. Both the Paralympic Summer and Winter Games are recognized on the world stage. The Paralympics is no longer held solely for British war veterans or just for athletes in wheelchairs, but for elite athletes with a wide variety of disabilities from all over the world.

We will be seeing his Sehmi’s face along with a whole load of other Paralympic athletes, all competing for gold on Channel 4 television, who will be covering the 2012 Paralympics in London.

Aman is an outgoing individual with a genuine sense of humour, enthusiasm, a zest for life. She has a passion for the world of media, music and presenting. One of her favourite quotes is “Give a girl the right shoes, and she can conquer the world.” by Marilyn Monroe.
2012 Olympics Medals Galore
India wins Silver at Paralympics 2012