After the four years of waiting for it, the Olympics 2012 took place in London between 27th July and 12th August. Officially opened by Queen Elizabeth II, the huge event had 10,820 athletes from 204 countries participating in 302 medal events in 26 sports.

An event with a fantastic opening ceremony, incredible participation and a memorable closing ceremony; the organisation and presentation of the 2012 Olympic Games did the UK very proud.

Whether the participating athletes won a medal or not, they can forever call themselves Olympians. The sporting competitions were undoubtedly the central focus of the Olympic Games and participating in the Games was the ultimate goal for most athletes. 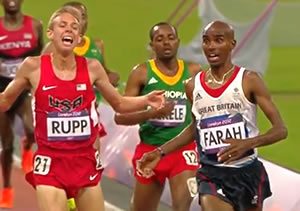 It was a very special Olympic Games for Team GB who won a fantastic haul of 65 medals in total with 29 gold medals, 17 silver and 19 bronze. This placed Team GB third in the overall medals table. Not only did the British exceed expectations but they smashed them. By achieving such as tremendous feat, previously unknown UK athletes became household names.

The chairman of the British Olympic Association, Colin Moynihan, said: ‘It’s the greatest team we have ever sent to an Olympic Games.’

The Team GB gold medallists included Mo Farah for the 10,000 metres and 5,000 metres races; Greg Rutherford for the Long Jump; Andy Murray for the Men’s Tennis Singles against Roger Federer; Nicola Adams for the Women’s Flyweight Boxing; Jade Jones for the Featherweight 49-57kg Taekwondo; Jessica Ennis for the Heptathlon, and Helen Glover and Heather Stanning for the Women’s Pair Rowing.

India had sent a total of 83 athletes to compete in 13 sports, making it the largest contingent India has ever sent to an Olympics game. India won 6 medals including 2 silver and 4 bronze, which is by far the best performance by India in terms of number of medals won at any single Olympic games. 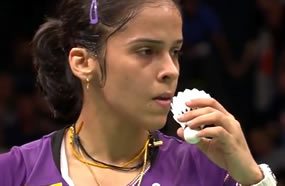 “I told my dad I was sorry I couldn’t win gold but at least I have a bronze medal. I just can believe it,” said Saina at a press conference.

Mary Kom won India its fourth medal at the Games by winning a Bronze in the Women’s Flyweight category in Boxing. She is the third Indian woman to win a medal at the Olympics, and the first female Indian boxer to receive a bronze medal. Despite this, Mary Kom has expressed that she is feeling disappointed with this.

“I am very happy to be the first Indian woman boxer to get a bronze medal but I am sad that I could not convert it into gold. I don’t know what happened during my semifinal bout. My body was not moving the way I would have liked and I felt as if I could not do anything. I was very much confused.” 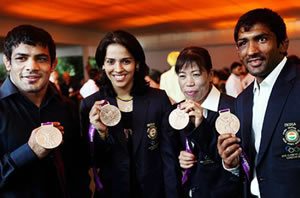 Mary spoke about the fight, saying that she hit her opponent hard, but admits that Nicola Adams was the victor.

With Mary Kom being the first Indian female boxer to win a medal, the Games also brought World records. Usain Bolt, Jamaican athlete made his perfect farewell to these Games by leading the Jamaican men’s 4x100m relay team (Bolt, along with Yohan Blake, Nesta Carter and Michael Frater) to stunning gold in a world record time of 36.85 seconds. Blake had insisted that in running 37.39 seconds in the semi-final, the Jamaicans had been “trying not to run too fast” and “taking it easy.” So it proved in a heart-pounding finale. 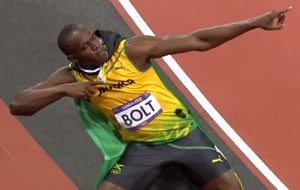 Bolt spoke of his victory, saying  “It was a wonderful feeling to end on a high note. It was a great championships, I’m happy, the team came out and gave it their all … I wish we could have gone faster,” he half-joked, “but we leave room for improvement.”

The 2012 Olympics closing ceremony celebrated the amazing sporting feats of the athletes who have taken part in the games, with the ultimate after show party. The ceremony commenced with fireworks after a countdown showing numbers from around London on such locations as road signs, 10 Downing Street, the Palace of Westminster clock tower.

More than 4,100 performers such as Emeli Sandé, Madness, Ray Davies, Elbow, One Direction, Kaiser Chiefs, Muse, Jessie J and Ed Sheeran joined in the live show, including 3,5000 adult volunteers and 380 school children from the six east London Host Boroughs. A notable appearance was made by the Dhol Foundation, headed by Johnny Kalsi and also Bhangra dancing by members of the Virsa Punjab dance group from Ilford who performed during the song ‘Always look on the bright side of life.” All these performances showcased the great creative talent of the United Kingdom in a fun, creative and of course festive atmosphere.

The athletes entered the stadium, and the volunteers were thanked. In accordance with tradition, the medal ceremony for the men’s marathon took place, with Uganda’s national anthem (Oh Uganda, Land of Beauty) played as Stephen Kiprotich was awarded the last medal. Six volunteers, chosen to represent the 70,000 who had worked at the games, were also thanked.

‘A Symphony of British Music’ followed to celebrate the fact that music has been one of Britain’s strongest cultural exports over the last fifty years.  The guests of honour were IOC President Jacques Rogge and Prince Harry, representing Queen Elizabeth II

Rachel is a creative and focused person who has a vested interest in unique beauty and fashion with an eye for art. She loves finding out more about the world through her writing. Her motto is 'You cannot open a book without learning something."
London 2012 Olympic Games
London Paralympics 2012