Indian wrestlers achieved a hat-trick of golds on finals day one at the Birmingham 2022 Commonwealth Games. More on the winners, with roundup.

"The attack became a reality and so did the pin."

On finals day one, it was a hat-trick of yellow metals for Indian wrestlers at the Birmingham 2022 Commonwealth Games.

The first day of wrestling gold medal bouts took place at the Coventry Arena on August 5, 2022.

The thrilling evening consisted of men’s and women’s freestyle and wrestling. There was a lot of support for Team India inside the arena throughout the final matches.

The night saw some of the most menacing and strongest wrestlers from India competing in gold medal bouts. The final matches took place on Mat B, with the medal podiums covering the area for Mat A.

After the first session, three of the athletes who went into the evening finals won gold for India.

Two men and one woman won gold under different wrestling freestyle categories. Every match was a two-round affair, split into three minutes each.

The three went up the central podium to receive their yellow metal, with the national anthem of India following next.

We round up all the action, highlighting the contests and gold medal Indian wrestlers with exclusive reactions 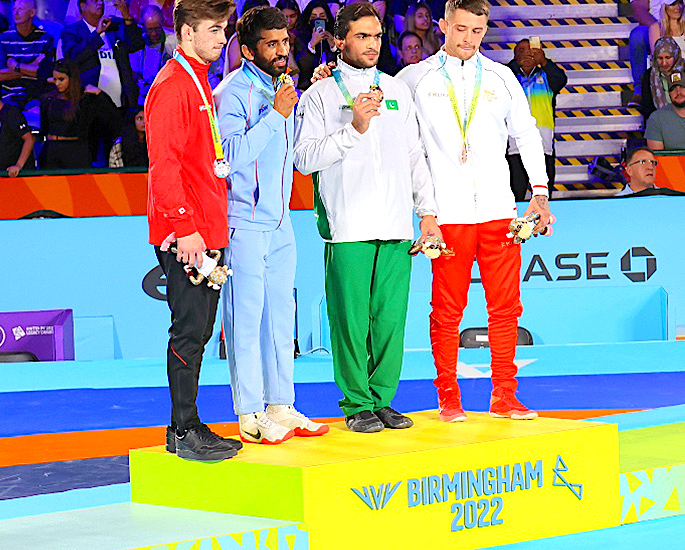 Bajrang Punia (IND) one of the most prominent Indian wrestlers easily beat Lachlan McNeil (CAN) to clinch gold in the men’s 65 kg match.

The two had come through the morning session, winning their matches to nil. Though, Bajrang had earlier come through three bouts, in comparison to McNeil’s two.

The Canadian made his entry in a red singlet, featuring his sponsor and nation’s flag. Bajrang made his appearance in a blue singlet, with the colours of India imprinting on it.

He was the defending Commonwealth champion, having won gold at the 2018 Gold Coast Games.

Bajrang was eager to do a ‘Chak De India’. The Indians in the crowd went behind their fully fit countryman who was ready to attack.

Bajrang began as quick as he did in the previous rounds, trying to pull his opponent down. The spectators were then heard chanting the triumphant slogan for the strong gripping Bajrang:

The powerful Bajrang who was using his feet persistently earned the first three points. This was courtesy of a single leg grab and a double for a takedown.

McNeil had no answer to Bajrang who was rapidly out of the blocks from the start.

Bajrang went onto rack another point, to take a 4-0 lead as McNeil was unable to keep his feet on the right colour of the mat.

The Khudan-born wrestler went into the thirty-second break, with a good cushion. In the second half, McNeil taking down the Indian for two points was only a mere consolation.

Bajrang then scored two points, for taking the man from Canada out, earning one point for the throw.

With just under ninety seconds to go, Bajrang had a four-point lead again. He added a point by driving out McNeil from the area.

Bajrang finished with a bang, as he took McNeil down for a further two points. It was a tremendous and professional performance by Bajrang from India, showing off his experience.

Bajrang was declared the winner, 9-2, successfully retaining his Commonwealth Games gold. As a result, there were massive celebrations from Bajrang and his supporters watching within the arena.

Bajrang spoke to us about his display and the crowd who were supporting him:

“It was a good performance. I am very happy with the love and support that the Indians gave to me and witnessing me perform.”

Bajrang also said that he was glad to be back in form after the injury setback he had during the Tokyo 2021 Summer Olympics. 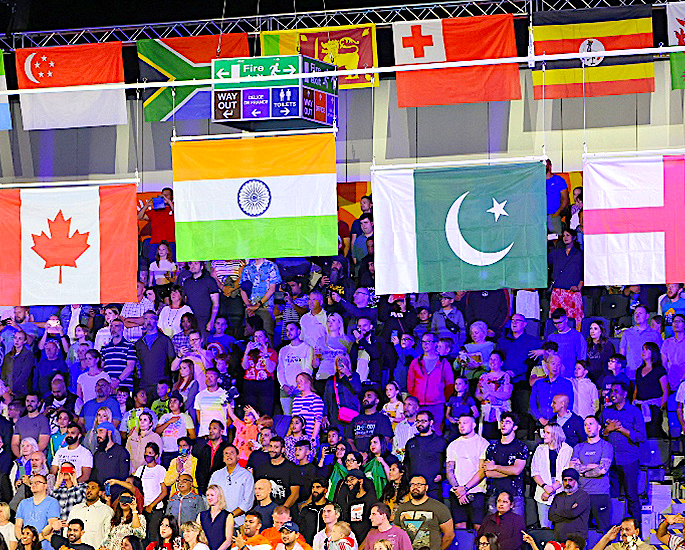 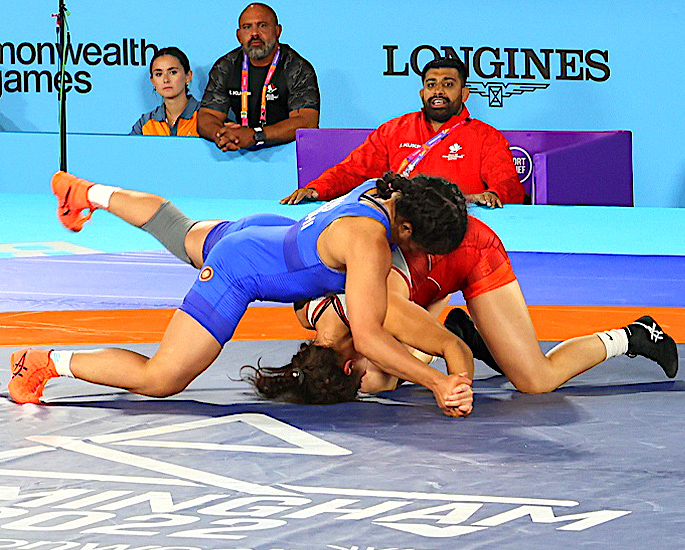 Sakshi Malik (IND) narrowly overcame Ana Godinez Gonzales to claim a yellow metal in the women’s freestyle 62 kg. It was yet another bout featuring wrestlers from India and Canada.

Ana who was born in Mexico was competing under the Maple Lead banner, wearing a red single with a hint of grey.

Sakshi Malik was in the customary blue singlet as seen by all Indian wrestlers.

Heading for the final, Sakshi, previously had a Commonwealth Games silver bronze (2018 Gold Coast) under her trophy cabinet in the same weight category.

Sakshi was the favourite going into the match. However, both wrestlers began with space from the go. The two were equally matching each other from a defence early on.

Following a bit of a tit-tat, Ana broke the shackles with a takedown, earning her two points.

Ana took a chance by opening up and on this occasion, she came on top. The Canadian then went 4-0 up, with a single leg and straight behind move, doubling her lead.

Sakshi had gone into a thirty-second breather, knowing that she still had a chance. Sakshi who had a small strap on her left leg came out quite aggressively for the second half.

The Indian woman dramatically took her opponent on the side before completely taking over to pick up four points. She then instantly pinned Ana, forcing her shoulders down to win gold for India.

It started from a single leg, with a pickup, throwing Ana to the side. The finish saw Sakshi, tying up Ana from the top half.

The match came to a halt with just over two minutes remaining. This was a quick attacking turnaround for the wrestler from India. The whole arena had Indian supporters erupting in joy.

This was an engrossing contest, as Sakshi had proven that she can turn on a sixpence. She came all guns blazing in the second round, true to the words from the Roman period:

“The fortune favours the brave.”

Following suit of Bajrang Punia, Sakshi’s accomplishment was a prompt for loyal fans to raise the Indian flags again. With everyone smiling, traditional music from the DJ was a great accompaniment.

Similar to other Indian wrestlers, Sakshi finally made it to the top step of the podium to collect her first-ever Commonwealth Games gold medal.

Sakshi told us that she did not panic when going behind, leading into the break:

“I knew I had time. There have been matches where there were only ten seconds left and I had come on top.

“Thus, I was thinking I still have three minutes left. I just had to settle and attack. The attack became a reality and so did the pin.”

Sakshi also mentioned that she was determined to win gold this time. Additionally, she dedicated the medal to everyone in the crowd and the millions of Indians watching on their TV sets. 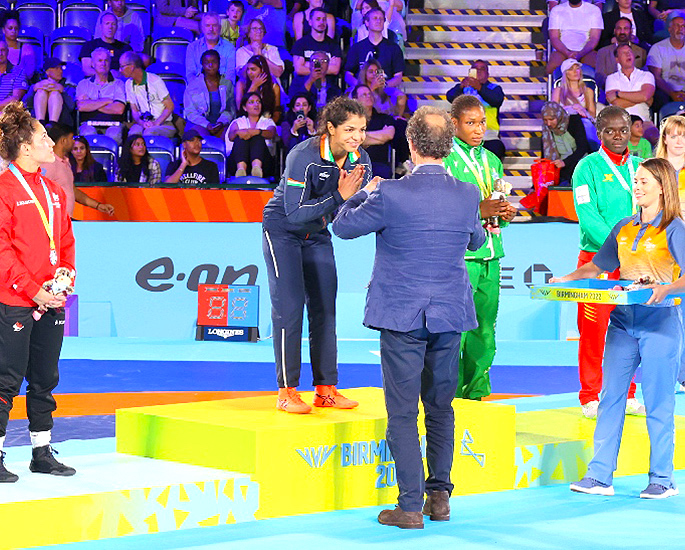 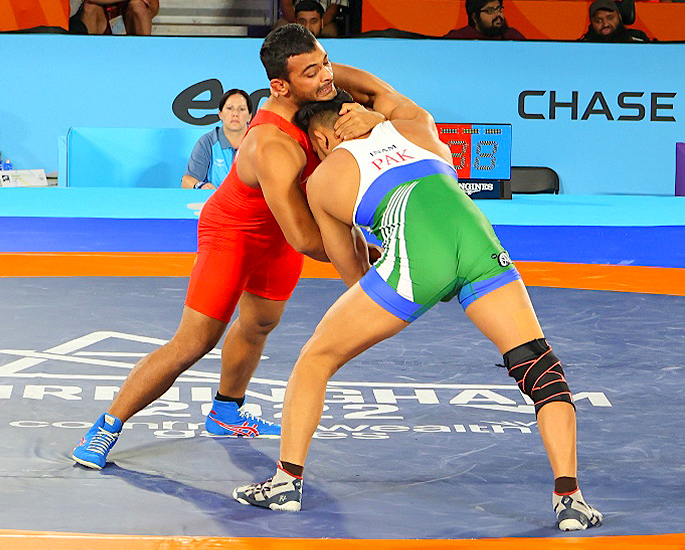 Featuring arch-rivals from neighbouring nations took on each other in the 86 kg category.

Different to the previous Indian wrestlers, Deepak made his way to the mat in a red singlet. Meanwhile, Inam came out in his green and white singlet, featuring the flag of Pakistan as its insignia.

Deepak was a man on a mission, whereas Inam was visibly tiresome. The old Indian Pakistani rivalry was reignited in the Coventry Arena.

The Indian supporters came in large numbers, with a fair few from Pakistan as well.

Early on, members of the audience went behind Deepak, encouraging him along the way. Both wrestlers were defending and protecting their legs at the beginning.

There were signs at the start that Deepak had better control over Inam. Though, both wrestlers were not quite opening up, with Inam receiving a warning.

The yellow card stop clock came into effect a little while afterwards.

A double leg from Deepak put him on the scoresheet as he had one point to his name. Deepak forced and checked his opponent out.

As per rules, Punia had another point on the board, as Inam was unable to strike during his warning phase.

From then on it was all action from Deepak, with Inam just reacting. The half-stage break made no real difference to either wrestler.

Both came into the second half in a similar fashion, with Deepak evidently stronger. Inam had a brace on his right knee, indicating the protection of the injury.

Was this a reason for his lacklustre display? Is it possible that the knee was hampering his movement? The lunges by Deepak on Inam did not help his knee.

Nevertheless, Deepak still was looking the better of the two. He kept pushing Inam back, as the crowd kept shouting:

The Indian was trying to chase his opponent at this point. Deepak went on to earn his third point, as Inam’s foot was off the area, following a mini tussle.

From a neutral perspective, it was disappointing to not once see Inam coming forward. Whilst the two had good defence overall, Deepak was never in danger.

The inevitable was just a matter of seconds as both wrestlers had nothing left. Deepak was just strategically wasting some time, as Inam had no real intent.

It was finally all over, with Deepak claiming gold. Reigning champion Inam who had no answer, lost 3-0.

India came on top in this traditional derby. It was not the prettiest match. Having said that, some matches are about completing the job. This is exactly what Deepak did, tactically being more dominant. 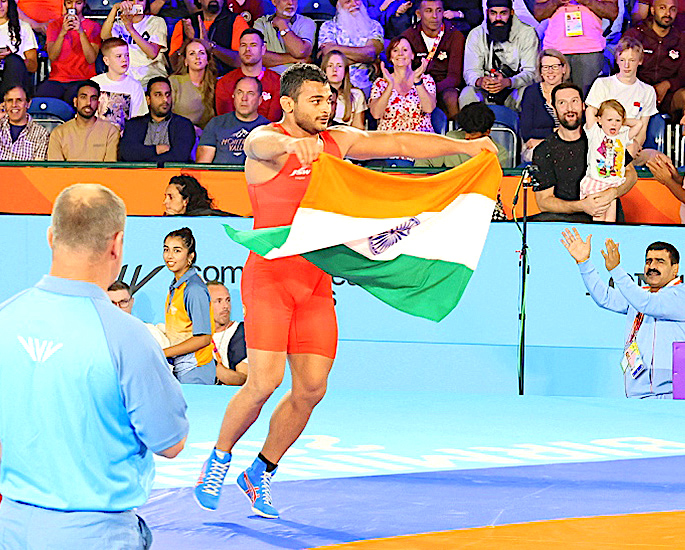 Deepak made all the right moves, with there being no doubt about who was going to win. Deepak went off stage proudly with the Indian flag around him.

Up in the crowd, Indians were dancing, raising their arms and hands in celebration. It was all smiles for an Indian spectator, who had the flag painted just above her cheek.

Deepak even took a few selfies at the end, as he did a walk of honour, giving high fives to front-row fans.

Some fans were displaying the V for victory sign. It was a wonderful moment to see supporters who came in big numbers enjoying their gold hero.

Deepak went on to pick up his first gold medal at the Birmingham 2022 Commonwealth Games. Deepak has age on his side, which is a big plus point.

According to Deepak, he will not sit on his laurels until he wins an Olympic Games medal:

“Only after winning an Olympic gold medal will I acknowledge that I have done something big for my country.”

Furthermore, Deepak mentioned that his primary focus was to train hard and clinch gold.

There were other medals for Indian wrestlers on day one of the finals. Mohit Grewal won a men’s bronze (125 kg), with Anshu Malik taking silver (57 kg) and Divya Kakran (68 kg) third prize in the women’s freestyle events.

Vinesh had previously collected gold at Glasgow 2014 and Gold Coast 2018. Pooja was the other medallist on day two, receiving bronze in the women’s 50 kg event.

Other than a silver for Sharif, wrestler Ali Asad from Pakistan thrashed Suraj Singh (NZL) 11-0 to pick another bronze for Pakistan.

Pakistan had a total of 6 wrestling medals, with 3 silvers, and 3 bronze.

Returning to the Indian wrestlers, it was two nights of rejoicing for the country and its supporters worldwide. Looking ahead, all fairs well, especially for Deepak Punia.

Indian wrestlers picked up 12 medals at the Birmingham 2022 Commonwealth Games, including 6 gold, 1 silver and 5 bronze.

DESIblitz congratulates all the Indian medallists as well as the Pakistani wrestlers for their respective medals.