"I dedicate this medal [gold] to the children at my club who take advice from us."

The premier wrestling event was held in Sarigerme, Turkey from 06 to 07 October 2018.

The wrestler from Gujranwala who was making a comeback following injury defeated Irakli Mtsituri of Georgia 3-1 in the final on 07 October 2018.

During the sandy campaign to defend his 2017 title, the Pakistani wrestler beat many international players.

The 29-year old began his quest for gold with a 4-0 victory over Bo Andre Nergan of Norway in Round 1.

In the second round, he thrashed Adao Rafael Andrade Da Silva of Portugal 4-0. Butt went on to whitewash Romanian Mihai Nicolae Palaghia 4-0 in the third round.

He stamped his authority further with a 3-1 quarter-final triumph over Victor Soloviov from Ukraine.

He reached the final with a convincing 4-0 win against Grigorios Kriaridis of Greece. In a time of 03:59, Inam clinched gold after beating Georgia’s Irakli Mtsituri 3-1 to retain his title. 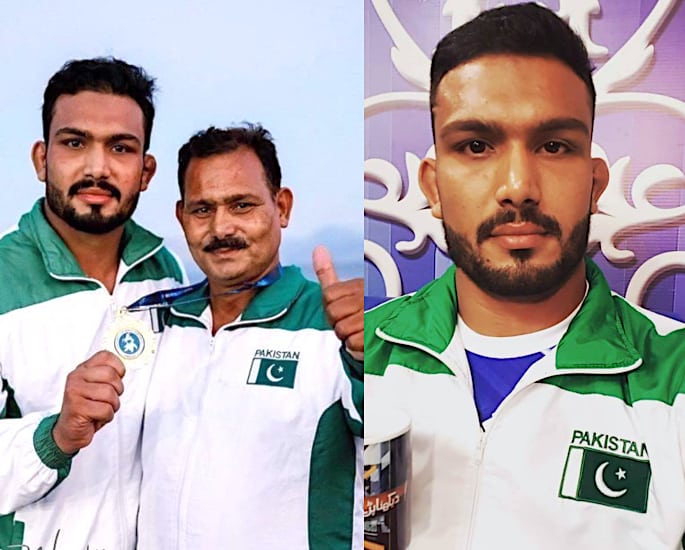 His father and coach Lala Muhammad Safdar Butt embraced his darling son after winning the finals, along with shedding tears of joy.

Butt also posted a message on Facebook acknowledging his father for standing by him saying:

“Today whatever I am is because of my respected father. Thanks to be here with me Lala Safdar Butt.”

“The management of PWF has made utmost efforts to promote Wrestling and Inam’s gold medal-winning performance is the outcome of years of dedication and visionary planning of the federation’s management under the Chairmanship of Syed Aqil Shah.”

After winning the gold for Pakistan, Butt produced a video message, dedicating his medal to Pakistan and those children from his Akhara (club) who work exceptionally hard to prepare the ring. He said:

“Once again I have made my county proud. For Pakistan, I have won the World Championship title once again.

“I dedicate this medal [gold] to the children at my club who take advice from us.

“There are no basic facilities in our ring in Gujranwala but still the young wrestlers work hard every day hence I dedicate this medal to them.”

Inam requested the government of Pakistan to establish an academy in Gujranwala to facilitate and develop young wrestlers.

The 2018 (Freestyle 86kg) and 2010 (Freestyle 84kg) Commonwealth Games gold-medallist has previously voiced his opinion on the inadequate facilities and training provided to wrestlers from Pakistan.

Hopefully, with his achievement, the Pakistan Wrestling Foundation, Pakistan Sports Board and the government will assist the development of the sport further.

Besides being two times Commonwealth Games champion, Inam Butt claimed gold in the 86kg freestyle competition at the 2016 Asian Games in Guwahati, India.

Meanwhile, it was important for Inam to win in Turkey especially with the Olympic Games qualifiers starting in 2019. The 2019 South Asian Games also take place in Kathmandu and Pokhara, Nepal.

Inam Butt will arrive in Pakistan on 09 October 2018. He will receive a heroes welcome at Allama Iqbal International Airport Lahore, followed by a rousing reception in his hometown Gujranwala.

DESIblitz congratulates Inam But for winning a gold medal at the 2018 World Beach Wrestling Championships.