As the games wrapped the host nation reigned victorious following China and Thailand’s examples in 2012 and 2014 respectively.

Other nations put in respectable performances however and Muhammed Inam Butt took Pakistan to gold glory with victory in the 90kg beach wrestling event.

After defeating Iran’s Syed Muhammad, Inam took to the podium to celebrate Pakistan’s 10th medal of the games.

This followed on from fellow Pakistani Muhammad Nazir taking silver in the 70kg category earlier on in the competition. Nazir narrowly missed out on the top prize after a strong performance at the tournament. He was defeated by Iranian Mohammad Naderi.

Originally from Gujranwala, Pakistan, Inam Butt swept aside four other opponents before taking on Syed Muhammad in the final, not dropping a point in the process. 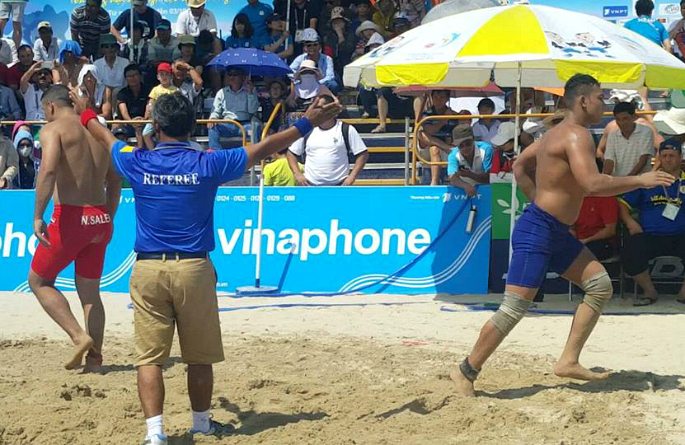 Next, Inam took on 19-year-old Ishakat from Jordan who he dispatched of with a convincing 5-0 win before completing the group by defeating Syria’s Naouzat Saleh with 4 points to nothing.

He can add the medal to his Commonwealth Games Gold medal from 2010 in India and South Asian Games Gold Medal 2016.

“I am very happy that I won Gold at the 2016 Asian Beach Games for my country Pakistan. This is all down to my fighting spirit, along with my special focus on training hard. I hope to continue my form in the future.”

He further added: “I would like to thank my parents, coaches, teammates, and the Pakistan Wrestling Federation for their support.”

“I would like to dedicate this Gold medal to my coach Chaudhry Shabbir Husain (late).”

Butt will next participate in the Commonwealth Senior Wrestling Championship in Singapore beginning on November 5, 2016, no doubt seeking to continue his winning streak.

Where are the British Asians in English football?
BRICS U-17 Football Cup 2016 kicks-off in India