Canadian born Indian Punjabi wrestler secured gold at the Birmingham 2022 Commonwealth Games. We roundup the final versus a Pakistani athlete.

the busier Dhesi forced his opponent off the area

Amar Dhesi (CAN) who is of Punjabi heritage won his maiden gold medal in wrestling at the Birmingham 2022 Commonwealth Games.

The Canadian wrestler also known by his first name Amarveer beat Zaman Anwar (PAK) in the 125 kg freestyle category at the Coventry Arena on August 6, 2o22.

Zaman from Pakistan had toppled Mandhir Kooner (ENG) in the semis, whilst Amar Dhesi got the better of Mohit Grewal (IND).

Zaman was seen in the green and white singlet, with the Pakistani flag noticeable as an emblem. Dhesi was in a usual grey and blue Canadian singlet, with a tattoo clearly visible on his right arm.

The father of Dhesi was also a Punjabi wrestler from India before moving to Canada in 1974. His father was the founder of the Khalsa Wrestling Club, Surrey, British Columbia, Canada. 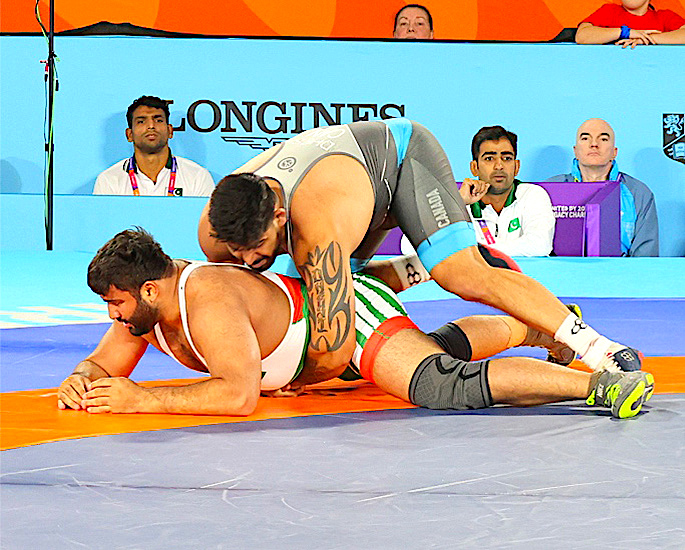 The power of the Canadian was quite evident as the match began. He took two points after firmly grabbing the legs of Zaman, with the latter just managing to escape from conceding any further points.

The two were going at a rapid pace. However, the busier Dhesi forced his opponent off the area, gaining another point, as he extended his lead to 3-0.

The large Indian crowd were behind Dhesi, particularly as Zaman was from Pakistan. Secondly, Indian Punjabi support came naturally to Dhesi, with his ancestral roots having a link with India.

Shortly afterwards, an under hook, with a side flick and turnover was enough to give Dhesi an unassailable lead. 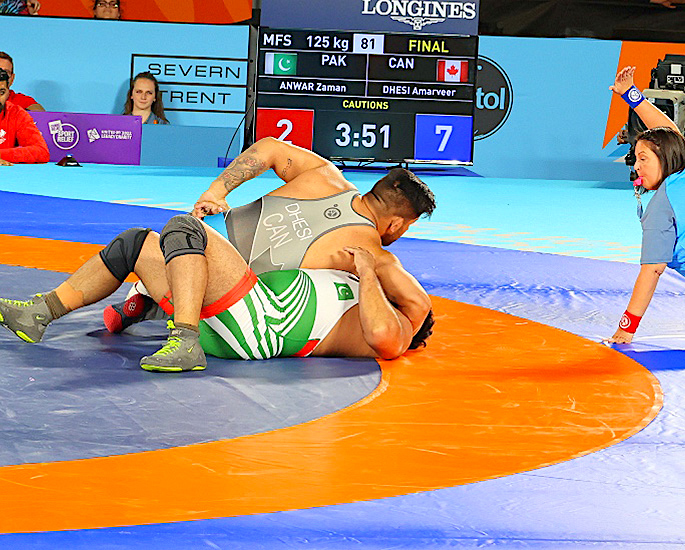 Whilst finals are more intense, this one was wide open in the favour of Dhesi. As the match went close to the two-minute mark, spectators began chanting his name:

Despite Zaman avoiding a whitewash, Dhesi pinned him in the same tussle for a 9-2 clinical triumph inside the first half. 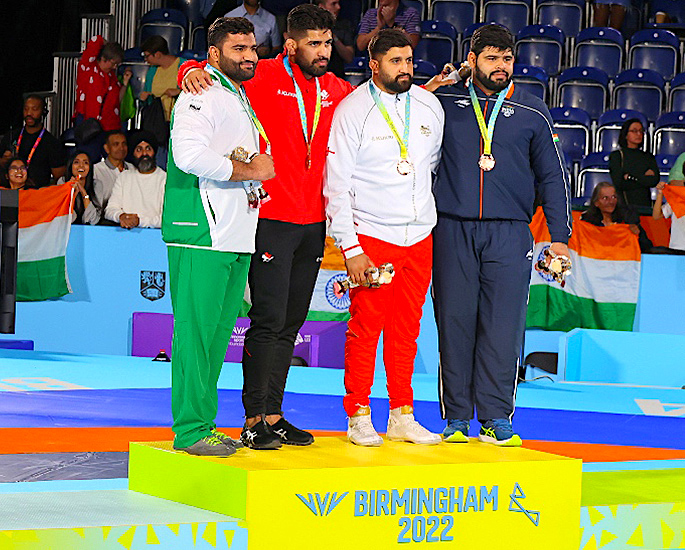 The achievement became even more special for Dhesi, knowing it was the first gold for Canada in wrestling at the Ganes.

In addition, the fact that Dhesi had multiple Anterior Cruciate Ligament (ACL) tears in the last few years was a testimony to his talent and hard work.

Dhesi was so strong that Zaman did not really get a look in during a very short bout. Having full confidence in his ability, Dhesi had the perfect final execution.

Dhesi went around the arena, with the Canadian flag around his neck. The maple leaf was in the eyes of everyone.

Dhesi gave high fives to fans and supporters of Canada. Desis supporting Dhesi was a delightful sight for everyone to witness.

There were big smiles on the faces of the crowd, with Dhesi entertaining a few selfies. A smiling Dhesi collected his medal, with calm, composing and friendly expressions coming through.

It was lovely to see Amar Dhesi on the highest podium with the rest of the medal-winning wrestlers also having a  South Asian connection.

In an exclusive conversation with DESIblitz, Dhesi shed light on his positive way of thinking heading into the final bout match:

Dhesi also mentioned that “belief” and having “fun” was the secret behind his success.

If Dhesi can keep fit, then the world is in his oyster. Surely winning more medals at the world level will be on his mind.

On August 7, 2o22, Desi Canadian wrestler, Nishan Randhawa also went on to pick up a gold medal in the men’s 97 kg freestyle event. A gold medal each for two North American Desi wrestlers was like icing on the cake.

DESIblitz congratulates Amar Dhesi and Nishan Randhawa on their amazing victories. The two of them had gone on to collect picking gold at their first ever Commonwealth Games in Birmingham 2022.