Arshad Nadeem is the first athlete from Pakistan to win a javelin gold with a Commonwealth Games record. He made Birmingham 2022 history.

"I would like to dedicate this medal to all of Pakistan."

Pakistani athlete, Arshad Nadeem made history by securing a record-breaking gold in the javelin throw at the Birmingham 2022 Commonwealth Games.

He became the first man from Pakistan to accomplish this fantastic feat at the highest stage on final track and field day. In fact, it was the last event to finish on the day.

The victory for Arshad came courtesy of his first throw of the final round at Alexander Stadium, Birmingham, UK on August 7, 2022.

Before Birmingham 2022, he came fifth at the 2022 World Athletics Championship.

It is that these Championships that he had a season-best throw of 86.16 metres. This was short of his biggest javelin throw rivals.

Never in his wildest dreams did he imagine a miracle that was just around the corner. Arshad made it to the final via direct qualification. He came into Birmingham 2022, battling with an elbow and knee injury. 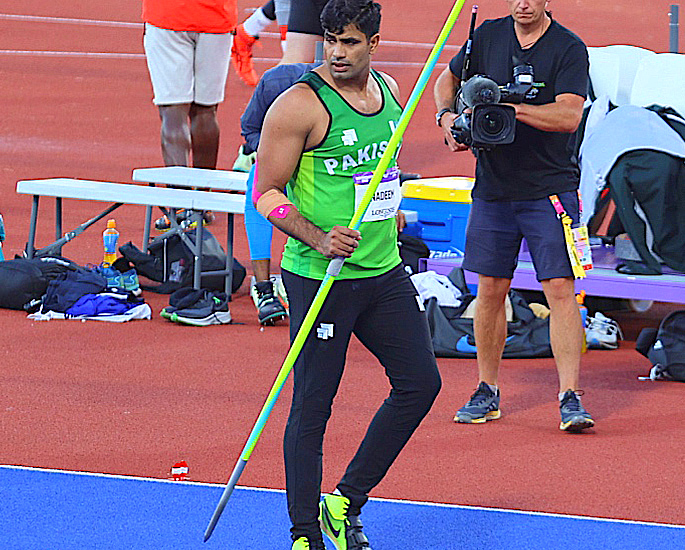 The javelin throw competition began at 7:40 pm British Subject Time. Arshad got off to a flyer in his first throw, reaching a mammoth distance of 86.81, which instantly became his personal best – be it momentarily.

His second was a no-throw due to an actual foul. In his third-round throw, he had another personal best of 88:00, extending his lead.

Did Arshad Nadeem begin dreaming about the unimaginable?

The mood was a friendly reminder of the famous saying by sports commentator, Ralph Carpenter:

“It ain’t over til the fat lady sings.”

At this point realistically, he probably felt some breathing space from close rivals, Anderson Peters (GRN) and Julius Yego, The latter had a season-best of 85.70 metres in his first throw.

On the other hand, Arshad kept going with his form, throwing a respectable 85.o9 metres in round four. 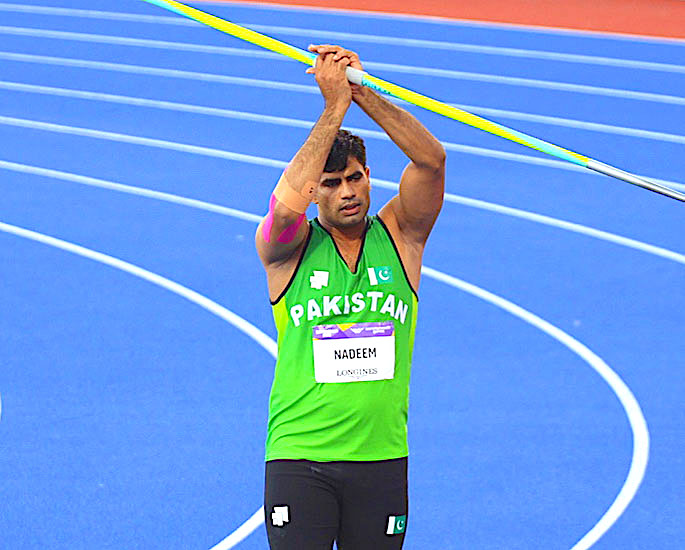 Despite Anderson dipping in round four, with a throw of 78.95 metres, he came back strongly in round five. Before his fifth attempt, Anderson was lying in bronze medal position, with a second-round throw of 82.74 metres.

As his fifth throw came down on the green field, everyone came to realise that it was long. With a distance of 88.64 metres, the Grenadian gave an air punch, with more emotions coming towards the crowd.

Anderson went up two places, into the first position, leading Arshad by 64 centimetres. His javelin was only 11 centimetres short of the Games record.

The few Pakistanis in the stadium, as well as the many millions watching in Pakistan and worldwide, had a very funny feeling for a little while.

Julius, meanwhile, had no real effect from rounds two to five, committing fouls consecutively, making them all invalid. 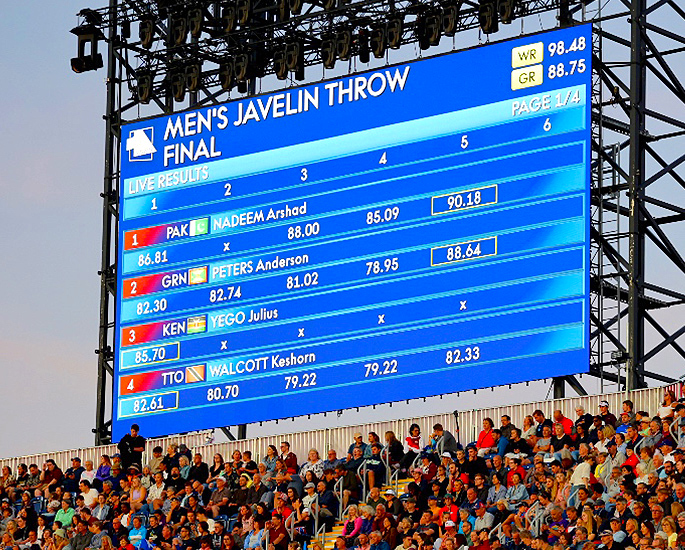 Going into the fifth throw, Arshad gave spectators a signal to back him by raising his hands. The response from spectators was positive, heavily clapping Arshad on.

Well short of the line, Arshad saw his throw elevating and reaching a record-breaking distance. His throw of 90.18 metres was a Games and national record. For the third time in the final, Arshad had a lifetime best.

For someone who had a previous best of 86.38 and then to increase that by almost four metres was simply phenomenal.

The Khanewal-born athlete also became the first South Asian to break the 90 metres barrier. Neeraj Chopra had that record previously, with a personal best of 89.94.

Julius of Kenya did manage to throw his final javelin in round six, but without making any impact. He was only able to reach 82.68 meters, confirming his bronze metal status. 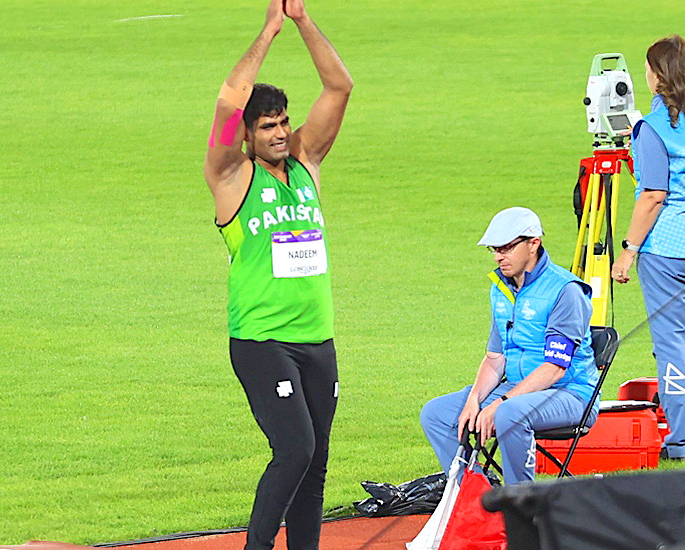 With Anderson throwing 85.50 metres in his six attempts, Arshad was the Birmingham 2022 Commonwealth Games champion. His efforts became a reality.

His gold glory was even more special, particularly with him not being fully fit.

Following a sixth sound throw, Arshad Nadeem began celebrating, bowing down to the Almighty in gratitude.

The men’s javelin throw medal ceremony was next to follow. Dr Sonia Johnson (ENG), Member of the Commonwealth Games Federation Medical Commission, and John Hunter, Group CEO OCS, had the honour of handing out the medals.

After picking his yellow metal from Dr Johnson, the smiling and proud Arshad stood tall for the national anthem of Pakistan. 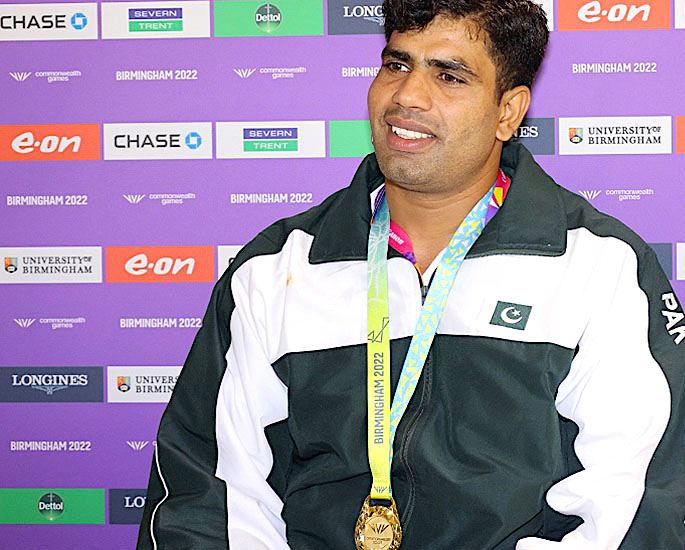 Following the medal ceremony, Arshad Exclusively spoke to DESIiblitz. In reply to a question about he was feeling following the gold medal triumph, Arshad said:

“I thank my parents for their prayers and the entire Pakistan nation for the same, resulting in a gold medal. I would like to dedicate this medal to all of Pakistan.”

Arshad amusingly admitted that it was a little nerve-wracking when the silver medalist came right back at him with his fifth throw:

“After the throw from brother Peter, my heart was beating slightly. However, I was confident with my next throw that I can reach the 90 + metres mark.

“With the prayers of all in Pakistan, I was able to successfully hit my target.”

Arshad also gave special credit to Dr Asad Abbas for his fantastic support, particularly as he was virtually functioning on one leg and arm:

“The injury was very severe. Hence, with Dr Abbas rigorously working with me I have won the ultimate medal.”

Arshad added that people from his village will have certainly stayed up and watched him in action. Furthermore, he, told us that his future goal is to collect the top prize at the Paris 2024 Summer Olympics.

Fast Forward, the javelin throw event, will see Arshad fighting it out with at least two other leading throwers from around the world.

DESIblitz congratulates Arshad Nadeem “The Supreme” for his outstanding form to conquer gold at the Birmingham 2022 Commonwealth Games.