Arshad Nadeem vs Neeraj Chopra at the 2021 Olympics

Arshad Nadeem of Pakistan will battle with India’s Neeraj Chopra for a javelin medal at the 2021 Olympics. We roundup and preview the final.

"Its Ind vs Pak in Tokyo Olympics."

The men’s javelin final at the 2021 Olympics will see Arshad Nadeem of Pakistan fighting it out with Neeraj Chopra from India on Saturday, August 7, 2021.

The javelin competition is generating a lot of interest amongst fans, particularly with both Arshad and Neeraj belonging to sporting arch-rival nations.

The two athletes from the sub-continent eased their way through the qualifying round on Wednesday, August 4, 2021. They both threw over 83,50 metres, which was one of the major qualification criteria to reach the final.

Arshad and Neeraj are eyeing gold. Though Johannes Vetter from Germany may stop them in their blocks.

We closely zoom into the qualifying performances of Arshad Nadeem and Neeraj Chopra at the 2021 Olympics.

We also look ahead to the final, where these two fantastic athletes will compete with each other. 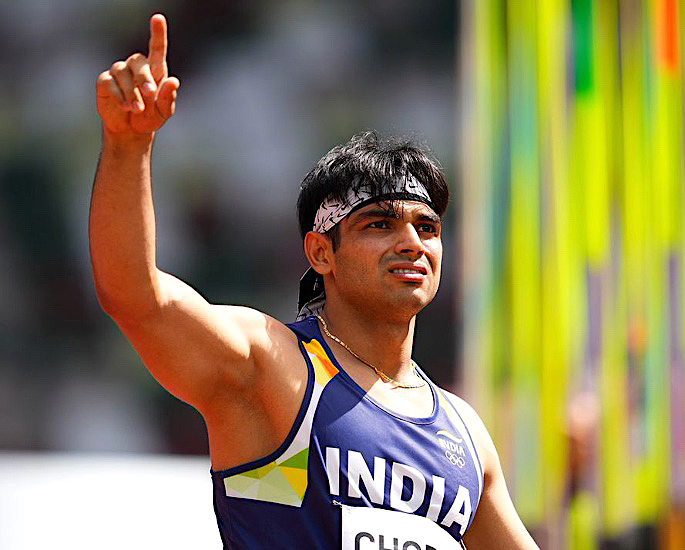 He was in smashing form as he comfortably made it to the final of the men’s javelin. He only needed one of his three throws to qualify.

Gong 15th in his group, a  monstrous throw of 86.65 was the best throw of Pool A. It was also the longest throw of all the participants, ranking him number one during this phase.

Despite, falling at the end of his throw, he was showing a lot of confidence. Neeraj spoke to the media about making his Olympics debut and  how he improved from pre-qualification:

“I am at my first Olympic Games, and I feel very good.

“In warm-up, my performance wasn’t so good, but then (in the qualifying round) my first throw had a good angle, and was a perfect throw.”

So literally, it only took a few seconds for a young Neeraj to storm into the final. To reach the final, courtesy of his first attempt was simply phenomenal.

“Congratulations to #NeerajChopra on qualifying for the finals of the #Javelin Throw event at #Tokyo2020 with a mighty performance. #PrideOfIndia.”

“The king of the arena has announced his royal entry… #NeerajChopra qualifies for finals in first attempt with a throw of 86.65.

Neeraj made it look very easy during the qualifier and has the entire of his nation. He has also made a terrific start to the javelin competition. 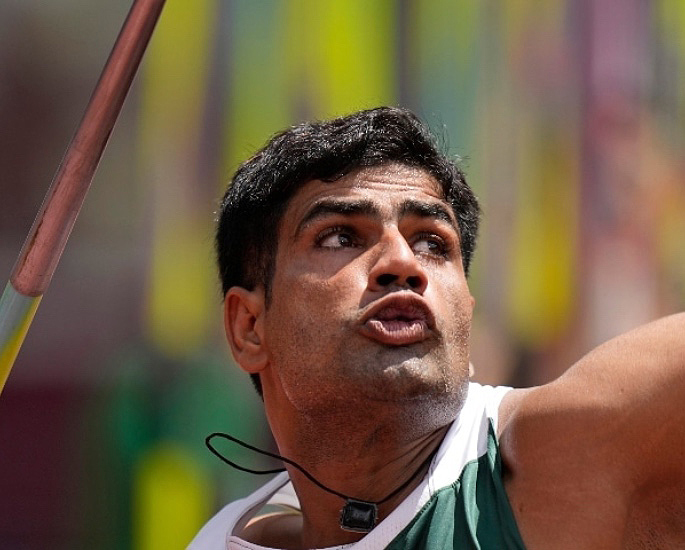 Arshad Nadeem was in Group B for the men’s Javelin qualifying phase at the 2021 Summer Olympics.

He only had to throw twice to qualify for the final. His first throw was more like a stretch out, registering a distance of 78.50.

However, his second throw was much further, reaching a distance of 85.16.  His coach, Fayyaz Bukhari was seen excited after the throw inside the Olympic Stadium

With Arshad qualifying for the javelin final, he was able to by-pass his third throw. Arshad was also able to top group B, with his qualifying throw.

Arshad also became the first Pakistani to qualify for the final on an Olympic track and field event. Post qualifying, Arshad told the media that he has put a lot of effort into the Olympics:

“I worked hard day and night for the mega event.”

Arshad also said that he will give his best for the final, and bring success to Pakistan. Pakistan star fast bowler, Hassan Ali was quick to praise the athlete on Twitter:

“Our hero from Mian Channu @ArshadJavelin Mubarak on reaching the final achievement.”

“Pakistan’s Arshad Nadeem created history as the Javelin Thrower hurled a massive 85.16 and throw and makes it to the Men’s Javelin Throw finals of the Tokyo Olympics.

“Congratulations, Arshad Nadeem you have made us all proud.”

Arshad has had a smooth passage to the final. Fellow countrymen are fully backing him to achieve victory.

An India vs Pakistan clash: The Chances 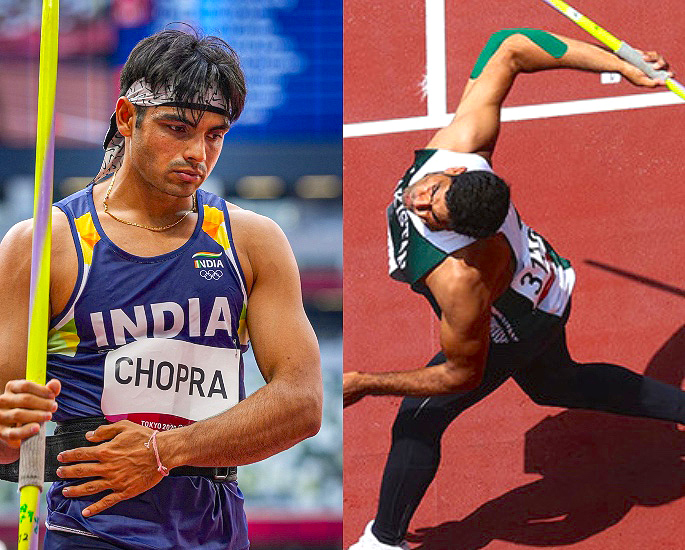 Whenever two strong athletes from India and Pakistan compete in a major sports event, it magnifies on a much bigger scale. Battling in an event at the Olympic Games will be interesting for both athletes.

Neeraj seems like a star who is born. He has a clear edge over Arshad in previous competitions, including the 2018 Asian Games.

He won a gold in Jakarta, with Arshad having to settle for a bronze. Neeraj is in good stead, beating his previous national record of 88.06 from the 2018 Asian Games.

His javelin reached a distance of 88.07 at the National Institute of Sport in Patiala on March 5, 2021.

Neeraj stresses that working on his mental side and throwing further is key to him winning the top prize:

“It will be a different feeling (in the finals), since it is my first time in the Olympics. Physically we (all) train hard, and are ready, but I also need to prepare mentally.

“I will need to focus on the throw, and try to repeat this (performance) with a higher score.”

Neeraj has a chance to prove his greatness in the final. Arshad certainly has given the Pakistan team and nation hope of bringing at least one medal back home.

Will it be gold, silver, or bronze? Well, this remains to be seen, and how Arshad performs in the final. However, Arshad can claim the number one position, providing he throws big, pushing his limits.

His biggest throw of 86.38 came at the Mashad Imam Reza Athletics tournament in 2021. Arshad will be targeting a personal best, especially if he wishes to accomplish men’s javelin glory.

Fans are already touting this as a battle between India versus Pakistan on Twitter. Muhammad Noman Hafeez wrote on Twitter:

“Its Ind vs Pak in Tokyo Olympics.”

Sundar Balamurgan was playing a bit of javelin diplomacy as he wrote:

“Hopefully, we would see India vs Pakistan fighting for the gold in javelin throw finals.”

On a neutral front, one man who can dash the hopes for Neeraj and Arshad is Johannes Vetter of Germany.

He went onto finish in the second position after the qualifying round, with a throw of 85.64.

Furthermore, his personal best is 97.70, which he threw at the Kamila Skolimowska Memorial on September 6, 2020.

Meanwhile, Arshad Nadeem and Neeraj Chopra will be focusing on their own game.

Whoever can hold their nerves better will be victorious. Chopra has the edge, with Nadeem having the passion to succeed.