"finally I have got it. I am super happy."

India’s PV Sindhu took another step towards etching her name in the badminton history books as she won her first Commonwealth Games singles gold medal.

She defeated Canada’s Michelle Li in the women’s singles final.

By winning gold, Sindhu completed a hat-trick of medals at the Games.

Sindhu won bronze in the women’s singles in 2014 followed by a silver in Australia in 2018.

A former two-time Olympic medallist, Sindhu had won gold in the mixed team event at the 2018 Commonwealth Games but a singles gold eluded her until August 8, 2022.

With the crowd behind her, the Indian shuttler started the final aggressively, racing into a 4-2 lead.

A smash on Li’s left made it 7-5 before the Canadian came with a drop shot on Sindhu’s right to make it 7-6.

Sindhu took three straight points after the interval to increase her lead to 14-8. Michelle then netted a regulation forehand drop, leaving her smiling in frustration.

Michelle did come up with two consecutive backhand winners for 14-17 but Sindhu bagged the first game with a swat shot on the Candian’s body.

In the second game, Li adjusted her strategy and targetted Sindhu’s body – a tactic used against the Indian to restrict her long reach advantage.

But Sindhu found enough space to swing her racquet.

Nothing seemed to be working for Li, a former Commonwealth Games champion. 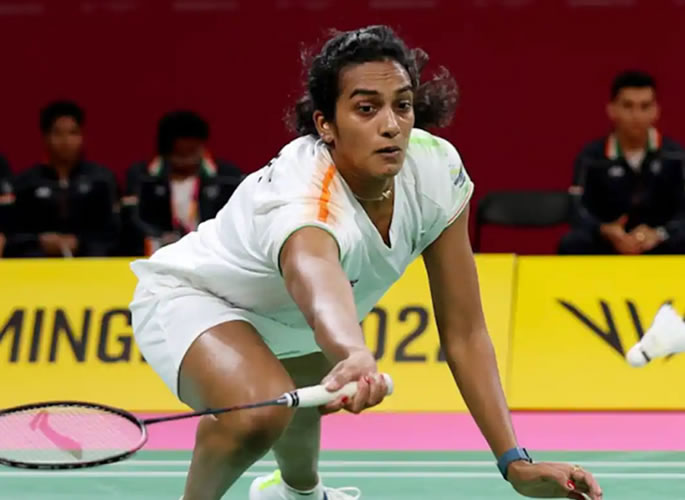 Once again, Sindhu had the Canadian on the run with five back-to-back points and went into the interval with a comfortable 11-6 lead.

Li mounted a brief comeback after the break, winning a few back-to-back points and engaging Sindhu in rallies. This included winning the longest rally of the match.

But PV Sindhu was too strong, completing her win with a cross-court winner.

After the final, Sindhu said:

“I had been waiting for this gold for a long time and finally I have got it. I am super happy.

“Thanks to the crowd, they made me win today.”

Fans were delighted and took to social media to congratulate PV Sindhu.

“Literally hobbling on 1 leg. Congrats Champion. What a brave performance. Just so proud.”

“Congratulations on your remarkable efforts to win the gold medal for the country in the Singles Badminton Final.

“You’re an inspiration and a role model for our youth.”

“The phenomenal PV Sindhu is a champion of champions!

“She repeatedly shows what excellence is all about. Her dedication and commitment is awe-inspiring.”

“Congratulations to her on winning the Gold medal at the CWG. Wishing her the best in her future endeavours.”

Sindhu reached the final after a gruelling 21-19, 21-17 victory over Singapore’s Yeo Jia Min.

Her final win takes India’s gold medal tally to 19 at the 2022 Commonwealth Games.

Dhiren is a journalism graduate with a passion for gaming, watching films and sports. He also enjoys cooking from time to time. His motto is to “Live life one day at a time.”
Arshad Nadeem Javelin Gold Record: Birmingham 2022
Gold Boxing Glory for Nikhat Zareen: Birmingham 2022