India’s PV Sindhu wins bronze medal at the 2013 World Badminton Championships, after losing in the semi-finals to Ratchanok Intanon of Thailand 21-10, 21-13. This is India’s first individual medal since 1983.

"I've reached here thanks to my coach. It has been a good tournament for me."

Pusarla Venkata [PV] Sindhu from India had to settle for a bronze medal after losing in the semi-finals of the 2013 World Badminton Championships. Ratchanok Intanon from Thailand comfortably beat Sindhu by two straight games.

Saina Nehwal and Parupalli Khashyap also from India had crashed out in the quarter-finals.

Assured of India’s individual bronze medal in three decades, PV Sindhu was aiming to make her first World Championships, even more memorable as she took to the courts at the Tianhe Sports Center in Guangzhou, China.

Sindhu had the entire Indian nation on her side, along with the prayers and support of her family and national coach Pullela Gopichand. But Sindhu after her success in the previous rounds wasn’t able to repeat those performances against her Thai opponent. 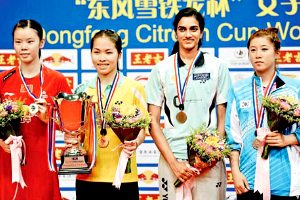 Intanon from Thailand showed early on the kind of form that has taken her to third spot in the world rankings very rapidly.

The Thai girl who beat Sindhu in their only previous meeting looked in ominous form, taking a 10-4 lead in the first game. Sindhu who toppled two high ranked players en route to the semi finals was clearly under pressure as she started making errors.

The fourth seed won the first game impressively 21-10 in just thirty minutes. It seemed all too easy for Intanon in the second game, as she quickly raced to a 6-0 lead. And it turned to be more more of a no contest as Intanon continued to outplay the young Indian player.

So heartbreak for Sindhu no doubt, but things can only get better from here for the talented teenager. Speaking to the media, the eighteen year old had mixed emotions, but as expected was a happy girl after creating history:

“I am a bit upset after the loss but I am happy to win the bronze. It was my first World Championship and it is a big victory for me,” said Sindhu.

She added: “It was really a tough draw for me and beating the two Chinese players was down to the hard work and effort that we put on court. I’ve reached here thanks to my coach. It has been a good tournament for me.”

Sindhu credits her achievements on the court to Pullela Gopichand – he believes his players have the potential to go higher and it is their consistent hard work that’s getting them rewards now:

“If looking back three quarter-finals was good, but probably we had a chance to convert three of them into medals. In a way a little disappointed that we could not do that. But the potential is there and the players are young, so I’m hoping that we will get better results next time,” said Gopichand. 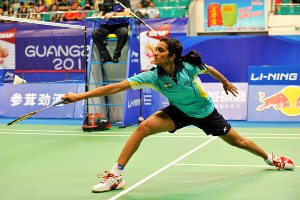 “I think a lot of hard work has gone on with the likes of Saina, Sindhu and Kashyap, along with some of the other young players coming through. I think its good that Saina has showed the path to the younger players – the belief that it can be done,” he added.

Former Indian badminton player, U. Vimal Kumar whilst analysing the game and the sport said:

“I thought it was artistic badminton of the highest order. Very few key players play badminton of that sort these days and I think the Thai girl really outsmart Sindhu. Absolutely this is one sport, which is definitely looking up.”

“I think a little faster game, would not have given Ratchanok the time to create the strokes. That would have probably helped Sindhu. So I think Sindhu has to develop that and I’m sure she will. I think she is really young and she has a lot of time on her hands,” she said. 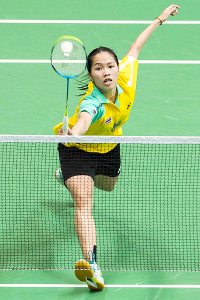 Back home in Hyderabad, her family too is excited about the prospect of Sindhu being a future world champion. And are confident that their eighteen year old daughter has a bright future:

“We expected more, but she couldn’t do. Ok no problem she’ll learn next time,” said her mother, P. Vijaya.

Good wishes poured in from celebrities like Shahrukh Khan who tweeted: “..and congratulations Sindhu. You make us proud. Mr. Padukone had done it & now u. Way to go…keep shuttling.”

Indian badminton star, PV Sindhu might not have made it to the finals of the 2013 World Badminton Championships, but she has won billion of hearts with her bronze winning medal performance in China. This is the first individual medal for India in thirty years.

The future of Indian badminton looks secure with new stars like PV Sindhu emerging from the ranks. In the years to come, she along with Saina Nehwal will form a formidable force at the world stage.

Faisal has creative experience in the fusion of media and communication and research which increase awareness of global issues in post-conflict, emerging and democratic societies. His life motto is: "persevere, for success is near..."
Monty Panesar fined for Drunken Behaviour
Indian Badminton League 2013