“Sindhu known for her good attacking play did not get too much of an opportunity."

For the second year running PV Sindhu of India had to settle for a Bronze medal in the Women’s singles at the badminton World Championships.

Sindhu lost in straight games 21-17, 21-15 to Spain’s Carolina Marin in the semi-final clash at the Ballerup Super Arena in Copenhagen, Denmark on 30 August 2014.

Sindhu was already assured of a Bronze medal after she had won her quarter-finals game against World No.2 Wang Shixian.

PV Sindhu hoping to create history by becoming the first Indian woman to reach the final of the World Championships fought back with four straight points to level 6-6 in the first game. 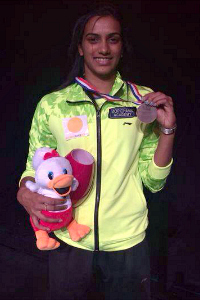 But ninth seed and the 2014 European champion, Carolina Marin proved to be a challenging opponent for Sindhu.

The Spaniard in her first World Championship semi-final then surged ahead 15-10. The World No. 10 survived another comeback from Sindhu to eventually take the first game 21-17 in twenty minutes.

Sindhu, who lost the last time these two met in June 2014, though was beginning to match her opponent in the second game.

But the twenty-one year old from Huelva, Spain was still managing to come up with some great shots.

On the day, Marin was clearly in prime form. After forty-seven minutes it was all over for Sindhu as she went down 21-17, 21-15. The nineteen-year old from Hyderabad had to settle for her second Bronze at the World Championships.

Many had expected Sindhu to pull off this match, but fell short as she lost in straight games. Sindhu, who did perform well for short durations, hit the net too many times.

Her hand and game speed was slow as she looked very tired, especially when shuttles were coming hard at her.

“I think Marin came into the match very strongly. She came with a smart strategy and she executed it brilliantly. The pace she played at cramped Sindhu a bit and did not let Sindhu come under the shuttle and play her strokes freely.” 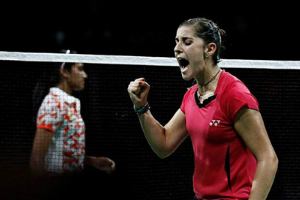 She continued: “Sindhu known for her good attacking play did not get too much of an opportunity today as Marin ran away with the match.”

The toll of a disappointing Commonwealth Games campaign clearly affected Sindhu mentally leading up to this tournament.

After failing to win a Gold or Silver at Glasgow 2014, Sindhu was very fired up for the World Championships as she played two amazing matches to enter the semi-finals.

Enroute to the last four she beat the second seed and 2014 All England champion Wang Shixian (CHN). Sindhu defeated Wang 21-12, 21-7 in the quarter-finals.

Even though she did not make it to the final it has been a good tournament overall for Sindhu. It was a phenomenal effort as she became the first Indian to win consecutive Bronze medals at the World Championships.

At nineteen, Sindhu has had a sensational start to her career, having already won the 2013 Malaysian Open title, her maiden Grand Prix Gold title. 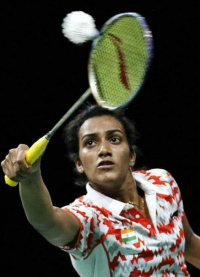 Being so young she has a good chance of winning Silver and Gold medals in years to come. Having defeated the formidable Chinese along the way, Sindhu can take a lot of confidence going forward.

Having performed so well, PV Sindhu has already become a young role model to many, hopefully encouraging more and more women to take up the sport. Indian badminton’s poster girl will now look ahead to the Asian Games.

While India has not won Gold at the Asian Games, PV Sindhu is probably their best bet for a medal in South Korea.

India’s ace shuttler, Saina Nehwal cashed out of the tournament a day earlier. World No.1 Li Xuerui (CHN) beat Nehwal 21-15, 21-15 in the quarter-finals.

Saina Nehwal will be disappointed with her performance as she failed to deliver at the world stage one again.

Faisal has creative experience in the fusion of media and communication and research which increase awareness of global issues in post-conflict, emerging and democratic societies. His life motto is: "persevere, for success is near..."
Indian Super League Football Season 2014
FA Roadshows encourage Young Asian Footballers