"I thank God for winning the medal."

It was a proud moment for Pakistan as weightlifter Nooh Dastgir Butt won the country’s first gold medal at the Commonwealth Games 2022.

Coming into the games, Nooh said he wanted to do one better than Bronze in his last outing.

But he ended up doing better than expected, lifting 173kg in snatch and 232kg in clean and jerk in the 109kg+ category.

His total of 405kg broke the Commonwealth Games record.

Prior to winning Gold, Nooh said:

“I have to win a medal, better than bronze, for my father and my country.

“My father was really upset with me the last time I won bronze, he didn’t talk to me for a while, so my goal is to do better now.

“I just have one request. I want a lot of prayers from my fellow Pakistanis for this event.”

Nooh’s win took Pakistan’s medal tally up to two at this stage, with the other medal being Bronze. 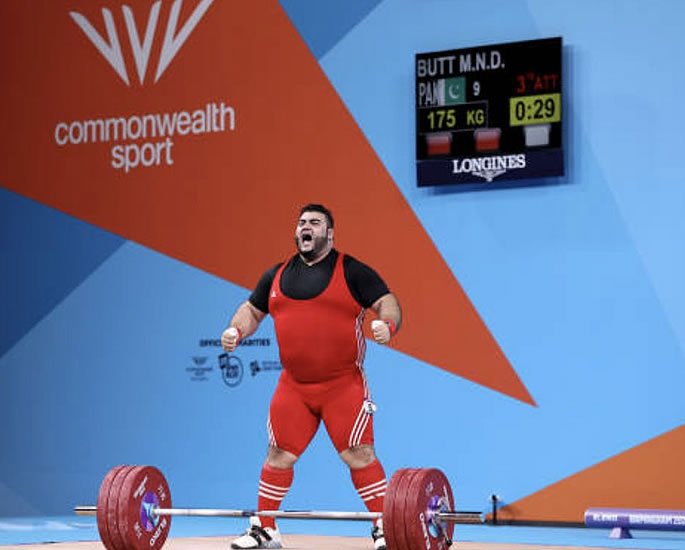 After the historic achievement for his country, Nooh also said:

“I thank God for winning the medal. I can’t express my feelings, I have been trying to win this game for the last seven years.”

“It was hard work and dedication that made me win this gold.

“Winning a medal for your country is always a proud moment. And, gold is something special.

“It was not easy for me to lift such a heavy weight. But, I pulled off doing it with hard work of 12 to 13 years.

“I dedicate this gold to my father, who worked for 12 years and helped me reach this stage.”

In addition, Nooh went on to say that his father trains him:

“My father was also an international weightlifter. And, my brother is also in this sport.”

After his victory, Prime Minister Shehbaz Sharif sent his congratulations.

Fans took to social media to congratulate the weightlifter on his win.

One user wrote: “Thanks for making us all proud.”

“Weightlifter Nooh Dastgir Butt wins the Gold medal for Pakistan in the Commonwealth Games with a record lift of 405kg!”

“Pakistan is proud of you.”

“Congratulations to Nooh Dastgir Butt for bagging gold in weightlifting at the Commonwealth Games!

“A moment full of joy and pride for the entire nation.”

One fan said: “You make us proud boy! Nooh Dastgir Butt, a billion thanks for bringing home gold.”

A tweet read: “Nooh Dastgir has really made us all proud. Glorious feat by clinching the Gold medal in the Commonwealth Games 2022.

“We must stand up and support our athletes they have tremendous passion.”

Dhiren is a journalism graduate with a passion for gaming, watching films and sports. He also enjoys cooking from time to time. His motto is to “Live life one day at a time.”
Weightlifter Vikas Thakur wins Silver & honours Sidhu Moose Wala
Commonwealth Games 2022: 5 Gold for India (So Far)