India bag Golds for Weightlifting and Shooting at CWG 2018

Continuing their good run at the CWG 2018, India is now third in the medals table with 17 medals after their securing Gold medals in weightlifting, table tennis and shooting.

India are in third place in the CWG 2018 table with 18 medals, two places behind the host country Australia.

India’s Gold medal haul shows no signs of slowing down as the country is in third place in the CWG 2018 medals table.

More success came for the Indians in the weightlifting and shooting events where both the men and women have been securing more medals in their respective events.

One of the biggest stories in the Commonwealth Games so far for India was Manu Bhaker. She won Gold in the Women’s 10m Air Pistol, breaking the Air Pistol CWG record with a total of 240.9.

It is an amazing story for the 16-year-old debutant, who took up the sport in 2016. Her fellow countrywoman, Heena Sidu joined Bhaker on the podium with a Silver medal.

The women continued their medal haul with Mehuli Ghosh, claiming Silver for India in the Women’s 10m Air Rifle final.

Mehuli pushed Singapore’s Martina Lindsay Veloso all the way to force a shootout. They were neck and neck between each other as they both set a CWG record of 247.2 points coming into the tiebreaker.

Veloso kept her composure as the Singaporean secured Gold, leaving the 17-year-old to settle for second place.

Apurvi Chandela could not keep up with her younger compatriot although the experienced Indian did join Mehuli on the podium with a Bronze in third place.

Jitu Rai continued his excellent run of form as he claimed yet another CWG Gold in the Men’s 10m Air Pistol.

In only his second appearance at the Commonwealth Games, Jitu had broken the record for the event with a CWG record of 235.1 points in the final, claiming his place on the top step.

That’s not all, Om Mitharwal joined Jitu on the podium by securing the Bronze medal with a total of 214.3 points.

Weightlifting was another event that India was hauling in the medals as they continued the country’s best-ever performance at the CWG 2018.

A jump in weight class paid dividends as her combined effort of 222kg (100kg snatch and 122kg clean and jerk) helped her claim Gold. 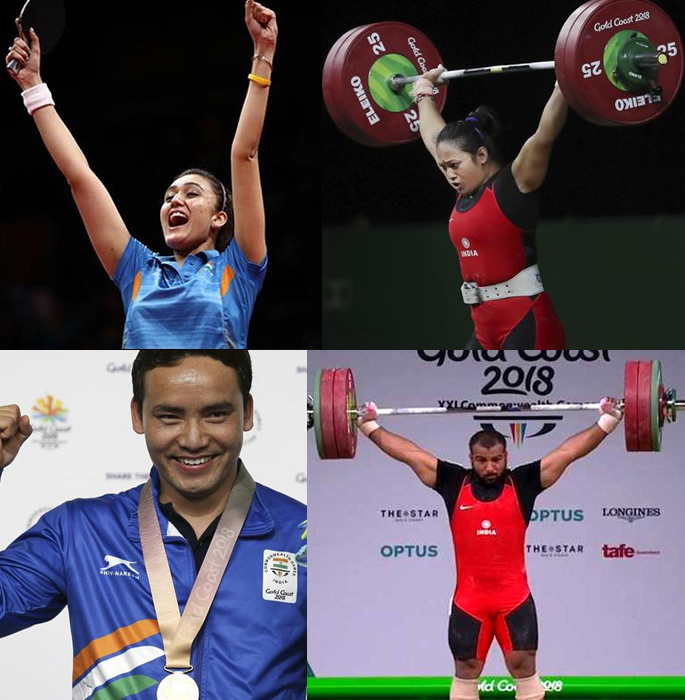 Pardeep Singh was pipped in his quest to retaining his Gold medal by Samoa’s Sanele Mao in the Men’s 105kg Weightlifting category.

This was not to be for the 23-year-old as Mao lifted 360kg (154kg snatch and 206kg clean and jerk), which was more than enough for the Samoan to claim Gold.

Singh had to settle for the runner-up spot with a Silver medal, meaning India still have five Golds in the Weightlifting, their best-ever performance at the CWG in this event.

Manika Batra played her part as she won both matches against Feng Tiawei (3-2) and Zhou Yihan (3-0) to grab India’s first Table Tennis Gold since the Men’s team achieved the feat in 2006.

With more medals up for grabs in other events on the Gold Coast, India is in with a good shot of continuing their medal haul at the CWG 2018.