On Sunday 8th April 2018, WWE presented another epic WrestleMania with more Desi Superstars than ever involved in a WWE Pay-Per-View. Find out how Jinder Mahal, Mustafa Ali and Kavita Devi fared at WrestleMania 34.

Once again, WWE delivered a WrestleMania to remember from the Mercedes-Benz Superdome in New Orleans, Louisiana with over 78,000 people in attendance.

Wrestling fans saw the debut of former UFC fighter, “Rowdy” Ronda Rousey, the return of Daniel Bryan and the return of the Undertaker.

Not only that, the on-stage talent represented many different parts of the world, making it one of the most diverse WrestleMania tournaments in WWE history.

We saw African Americans, Hispanic Americans, Canadians, Samoans, Japanese, a Brazilian, a Bulgarian, a Swiss, a New Zealander and more.

Of course, we must talk about the Desi Superstars who took this spectacular event by storm, including Jinder Mahal, Mustafa Ali and none other than Kavita Devi. Find out how they each fared in their championship matches!

The brownies are taking over! 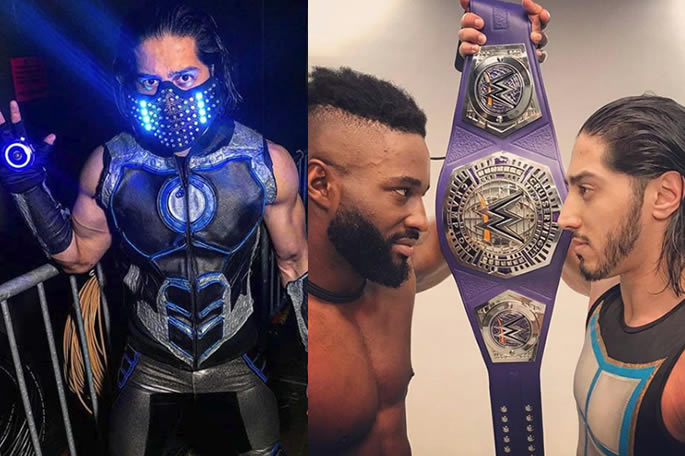 The Pakistani-Indian American, Mustafa Ali made his WrestleMania debut on the Kick-Off show. He entered the arena looking like a futuristic Sub-Zero from Mortal Kombat. He wore a bodysuit, an LED mask covering his mouth and nose and an LED hand accessory.

What made this match so compelling is Ali’s friendship and rivalry with his opponent, Cedric Alexander. We have seen these two put on stellar matches before, and they did not disappoint. This was a match full of drama and highly intense action.

The duo took to the sky, displaying what 205 is really about. Alexander performed a ‘Tope Con Hilo’. Ali pulled off a picture perfect ‘Spanish Fly’ and his signature ‘054’.

Alexander shocked the audience when he placed his foot on the bottom rope during a pin attempt after the ‘054’ connected. During a pin attempt, if the pinned wrestler makes contact with the rope, the pin is broken.

Later in the match, Ali attempted another ‘054’ but this time, Alexander moved out of the way and Ali got nothing but canvas. A back elbow and a clothesline later, Cedric Alexander hit his finisher, the ‘Lumbar Check’ and picked up the victory.

Although he was unsuccessful at capturing the Cruiserweight Championship, Mustafa Ali captured the hearts of the WWE Universe. He has definitely succeeded in encouraging a positive representation of Pakistanis.

India’s first female WWE Superstar, Kavita Devi made her WrestleMania debut in the Women’s Battle Royal along with some much loved NXT stars like Peyton Royce, Bianca Belair, Dakota Kai, Taynara Conti and the May Young Classic winner, Kairi Sane.

This comes as a surprise as the last time Devi appeared in the ring was in the historic May Young Classic.

The title of the match was changed to “the WrestleMania Women’s Battle Royal” after backlash from fans as controversy surrounds the late Fabulous Moolah.

A woman who WWE considers a pioneer in women’s wrestling, Moolah was accused by numerous women wrestlers over the years of pimping off and scamming her students.

This match featured 20 women from Raw, SmackDown Live and NXT. The objective of a Battle Royal is to become the last person standing. Eliminations occur when competitors are thrown over the top rope with both feet touching the ground.

Devi appeared in her signature orange salwar kameez and her dupatta tied around her waist. Standing at 5 foot 9 inches tall, the former powerlifter was the largest entrant in the match.

The beginning of the match saw the Indian star form an alliance with her NXT sisters against the veteran female superstars on the main roster. She would clash with the orange-haired, former SmackDown Women’s Champion, Becky Lynch after Becky humorously accused Devi of stealing her signature colour, orange.

Devi showed off her strength parading around the ring with Lynch in her arms, then dumping her with a body slam.

Devi put up a good fight in her second televised match but was eliminated by Sarah Logan of the Riott Squad.

The match was won by Naomi from SmackDown Live, lastly eliminating Raw’s Bayley.

Third Time a Charm for the Indian Superstar? Jinder Mahal vs Rusev vs Bobby Roode vs Randy Orton 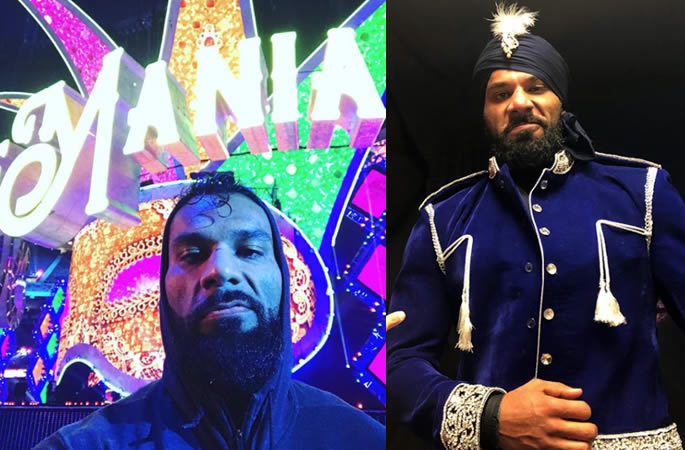 Sunil Singh introduced the Modern Day Maharaja to the ring. Both proudly showed off their heritage with Sunil wearing a white kurta and a dupatta. Jinder Mahal wore a short blue achkan with his signature turban.

Samir Singh was absent as he is still recovering from his ACL injury he sustained a couple of months ago.

This was a shaky match for Mahal as the match began. Bobby Roode would clothesline him over the top rope. He and Orton would receive a rolling cannonball from Rusev on the outside of the ring. Then be punched back and forth by Roode and Orton and dumped to the outside by the latter.

Rusev also had a go at throwing Mahal around too. For the majority of the match Mahal was dominated, barely getting a hit on his opponents.

However, things turned around for the Modern Day Maharaja when Sunil Singh hopped onto the ropes and took a Superkick from Rusev. Mahal capitalised on the distraction and executed his “Khallas”, the lifting cobra clutch slam.

Here is how some of the WWE Universe reacted to WrestleMania 34:

Mustafa Ali may have lost but Jinder coming through for South Asia! #WrestleMania

The WrestleMania excitement is not over yet!

Be sure to catch the post-WrestleMania Raw, SmackDown Live and 205 Live.

They are expected to deliver some more jaw-dropping surprises!