By the Numbers: WWE Royal Rumble 2018 and Jinder Mahal

It’s that time of the year when the ‘Road to WrestleMania’ begins, with the exciting Royal Rumble 2018! DESIblitz crunches down the numbers as it looks back on this historic pay-per-view.

Jinder Mahal competed in his third 30-Man Royal Rumble Match, after his previous entries in 2012 and 2013.

Another year means another chapter is written in WWE history as the annual Royal Rumble took place! On 28th January 2018, crowds gathered at a sold-out Wells Fargo Centre in Philadelphia, Pennsylvania.

Amongst wrestling fans, the Rumble is considered as one of the ‘Big Four’ events in the calendar. This, in particular, was historic as it included the first-ever Women’s equivalent of the fight.

How does the match work? It starts with two male or female Superstars in the ring. At timed intervals of 90 seconds, another wrestler comes and enters the fight.

Once all 30 wrestlers have entered, the last man or woman standing, who eliminates all 29 opponents, wins. They will go onto WrestleMania to face the WWE Champion or WWE Women’s Champion from RAW or SmackDown of their choosing.

This year, Shinsuke Nakamura won the men’s match whilst Asuka claimed the first-ever women’s equivalent. This means both Japanese stars will feature in the main event at WrestleMania 34, taking place on 8th April.

DESIblitz has managed to crunch all the numbers from the event, looking into the wrestlers’ performances. 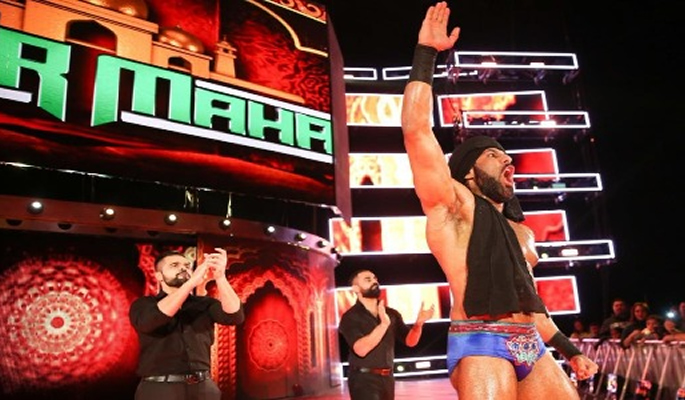 Jinder Mahal competed in his third 30-Man Royal Rumble Match, after his previous entries in 2012 and 2013. However, it might be a night that he would want to forget.

‘The Modern Day Maharaja’ entered at No.17, hoping to make a big impact. He collected the third-highest number of eliminations with two wrestlers: the New Day members Big E and Xavier Woods. However, his record remains less to be desired.

When it came to eliminating Kofi Kingston, Jinder ran into trouble. He almost threw the Superstar off the top rope, until Kofi managed to land on Xavier.

As wrestling fans expected with Kofi, whose re-entrance into the match is a long-running joke, he used a pogo stick to jump back in, with the help of his New Day teammates. He then eliminated the ‘Maharaja’ – ending his WrestleMania dreams.

His losing streak continued as his fellow Singh Brothers were not in attendance. Unfortunately, Samir Singh is still currently recovering from a torn ACL.

After losing the WWE Championship to A.J. Styles in November 2017, it has gone downhill for Jinder. Any wins on SmackDown are much needed for him to recover his confidence for WrestleMania. 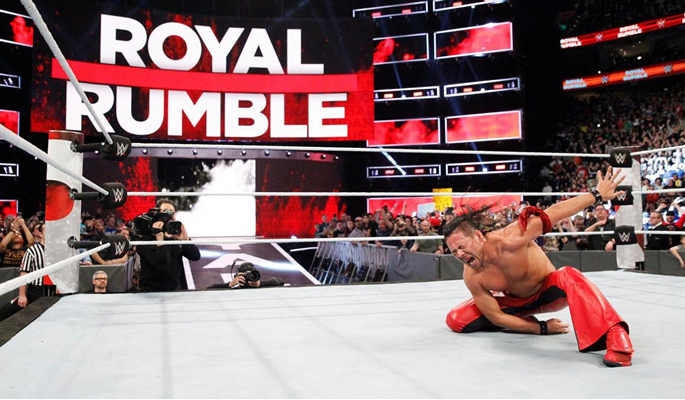 Shinsuke Nakamura set up a WrestleMania dream match with A.J. Styles shortly after winning the Royal Rumble. He also landed a stellar performance in the match.

‘The King of Strong Style’ entered at No.14. The wrestler became a fan favourite in the match, receiving huge cheers from the crowd. He lasted nearly a quarter of an hour, eliminating two-time Rumble winner John Cena and Sami Zayn.

When it came to him and 2015 victor Roman Reigns, they became embroiled in an intense fight-off. The Japanese superstar reigned supreme and eliminated ‘The Big Dog’ to set up a dream match with Styles.

He became the first Asian winner of a WWE Royal Rumble match. However, Nakamura’s near-45-minute appearance (44 minutes, 25 seconds) is not the longest in the fight’s history.

Rey Mysterio, 2006’s winner, holds this achievement as he lasted over an hour, eliminating Randy Orton to claim an opportunity at WrestleMania 22. He went on to claim the World Heavyweight Championship. 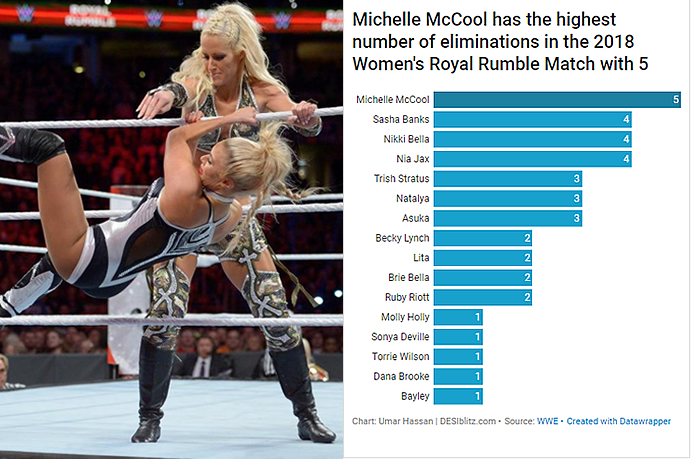 For the first time in 7 years, Michelle McCool made her return to WWE in the first-ever Women’s Royal Rumble Match.

Entering in at No.14, the Florida native showed a great return to form. She eliminated Vickie Guerrero, Lana, Molly Holly, Sonya Deville and Liv Morgan.

Michelle even claimed the highest number of eliminations in either Rumble match with a total of 5! However, her performance was cut short thanks to Natalya, who eliminated the wrestler.

Another Superstar who performed well was the undefeated Asuka. She kept her streak intact and eliminated 3 wrestlers – including Ember Moon and Jax (with the help of others). After also throwing Nikkia off the top rope, Asuka won!

She spent nearly 20 minutes in the match (19 minutes 41 seconds), becoming the second Asian winner of this type of match.

While the Women’s match proved a great success, Indian fans may have felt dismayed not seeing Kavita Devi amongst the competitors.

Sheamus’ 2 Seconds in the Rumble 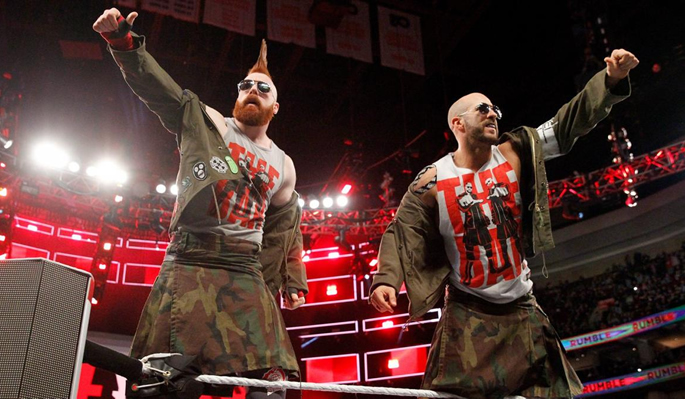 Sheamus had a relatively short stint in the match as he was eliminated in two seconds by Heath Slater.

The result was a shock to ‘The Celtic Warrior’. However, it seems he had a taste of his own medicine after defeating Daniel Bryan in 18 seconds in 2012 at WrestleMania 28.

Sheamus is second in the list of shortest Rumble appearances, with Santino Marella taking the top spot with 1 second in 2009.

It was not all that bad for the Irishman as he claimed the WWE Raw Tag Team Championship with his team-mate Cesaro for the fourth time. They defeated Seth Rollins and an injured Jason Jordan to claim the titles. 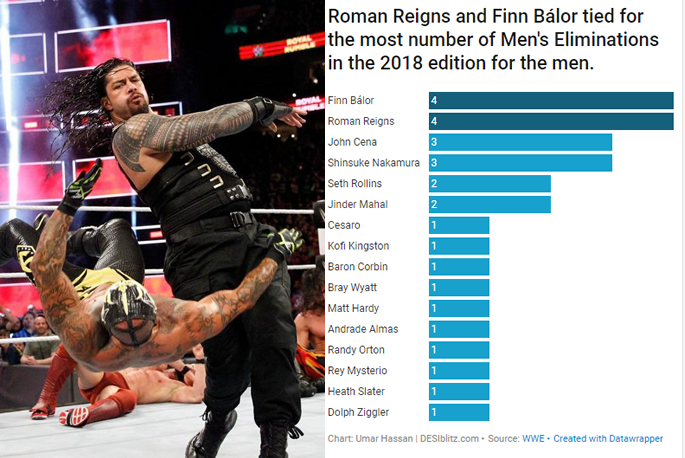 When it came to the Men’s Royal Rumble eliminations, Finn Bálor and Roman Reigns claim the top spot with four each.

The ‘Bálor Club’ leader was the second entrant in the match alongside Rusev. He eliminated Rey Mysterio, Aiden English, Dolph Ziggler and Baron Corbin. However, his run came to an end after he went over the top rope by John Cena.

Roman entered as No.28, eliminating Titus O’Neil, Randy Orton, The Miz and his Shield teammate Seth Rollins. It wasn’t enough for the former three-time WWE Champion as he was eliminated by the eventual winner Shinsuke.

That’s our breakdown of the 2018 WWE Royal Rumble. As usual, it was full of high energy, surprising entries and thrilling action!

The reaction to the event was fairly positive, with fans happy to see Shinsuke and Asuka winning their respective matches. Although there was some criticism towards Stephanie McMahon’s commentary during the Women’s match.

Former UFC fighter Ronda Rousey also made her long-awaited WWE debut. However, it seemed to backfire on the company, as it sparked a negative reaction from fans.

Now, the ‘Road to Wrestlemania’ at long last begins! ‘The Granddaddy of Them All’ Wrestlemania 34 will take place in New Orleans, on 8th April 2018.