The feud between Jinder Mahal and Randy Orton kicks up a notch as the No.1 Contender for the WWE championship steals the title belt!

Jinder Mahal continues to prove he will act as a strong competitor against the World WWE champion Randy Orton. This week he went one step further by actually stealing the WWE belt from the wrestler with the help of the Singh Brothers!

He stole the belt during the 25th April 2017 episode of WWE Smackdown, during a confrontation with Randy Orton.

The shocking moment acts as the latest development in the build up to Mahal’s match with Orton for the World WWE championship. It’s due to take place during the pay-per-view Backlash, on 21st May 2017.

The moment began after Jinder Mahal interrupted “The Viper” Randy Orton while he held a promo for a future match with Bray Wyatt.

He then decided to verbally attack the wrestler, saying: “How dare you overlook the Maharaja? How dare you disrespect me? I’m the true horror. You should be worried about me.”

The No.1 contender than accused Randy Orton of disrespecting him and added: “But at Backlash, I will take back my respect. I will take the glory of the World WWE championship back to me and my people.”

In what has been deemed as a way to cater to the wrestling company’s Indian audience, Mahal continues his promo in Punjabi:

He then engages in a fight with Randy Orton, but soon his accomplices, the Singh Brothers (formerly known as the Bollywood Boyz), arrive to help.

The three of them work together to strike “The Viper” down. To the crowd’s shock, in the process, they managed to steal his belt and leave the ring with it. 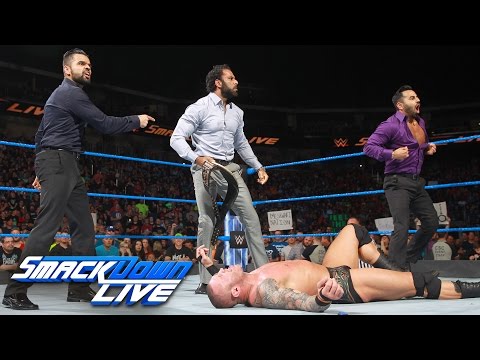 Since the incident, Jinder Mahal posted an image of him with the belt on Instagram. With a simple message of “Get used to it …. #wwe #1Contender”, the wrestler appears confident he will win the upcoming match.

Despite his villainous behaviour, many seem excited with the possibility of him winning. One fan said:

With the belt now in the hands of the No.1 contender, fans will be itching to see what happens next.