After Jinder Mahal visited India, WWE announced it will return to the country in December 2017. With an exciting match in store for their WWE champion!

"The love that WWE Universe in India is going to drive me and only motivate me further."

2017 marks a celebratory year for Jinder Mahal. After becoming the WWE Champion back in May, he dominates the famous ring. Defeating the likes of Randy Orton and Shinsuke Nakamura.

He has also enjoyed a recent trip to India. But now, WWE has announced Jinder will return with other wrestlers for an Indian tour.

Not only that, the wrestler is set for a WWE title match, going up against Kevin Owens! The announcement for this match came about on Facebook Live during an interview.

Indian wrestling fans will have to wait until 8th and 9th December 2017 to see the wrestlers in action. The tour will take place in New Delhi, at the Indira Gandhi Indoor Stadium.

Speaking to Times of India, Jinder revealed his excitement for the upcoming tour. He explained:

“Unfortunately, I wasn’t able to perform here last time WWE was here. So I can only imagine how loud they are going to be when, I, Jinder Mahal, the first ever WWE Champion of Indian origin, will make history by defending the WWE Championship on Indian soil.”

Meanwhile, the WWE wrestler has experienced a fantastic tour around India. Between the 13th and 15th October 2017, Jinder travelled to Mumbai and New Delhi to meet with excited fans. One such meeting even involved a famous face in the world of cricketing.

None other than Sachin Tendulkar spent some time with Jinder during his visit. Posing together, with Sachin holding the Maharaja’s shirt while the wrestler held his WWE title, the two seemed in great spirits. 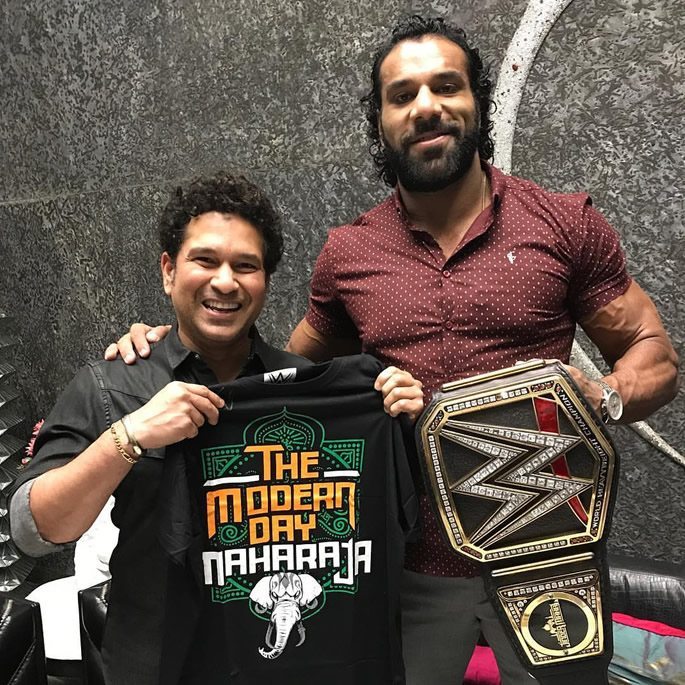 Meeting with Sachin Tendulkar and his son Arjun, the three engaged in an interesting discussion. Jinder revealed that the cricketer will watch him during the WWE tour, saying:

“It will be a huge honour when he comes as my guest to witness me in action [live in New Delhi]. He encouraged me to keep making India proud.” The wrestler also revealed to Times of India that he even carries some Bollywood ambitions!

“I want to be the flagbearer of WWE that is John Cena. He is crossed over into films and I wish to do the same. I want to crossover to Bollywood and I can see myself villain opposite to someone like Hrithik Roshan or Akshay Kumar. The sky is really the limit.”

It surely would be interesting to see Jinder Mahal make his own Bollywood debut. But until then, fans will have to wait for the 8th and 9th December 2017 when they can finally see him in action against Kevin Owens.

Kevin Owens will present a challenge, however. During his WWE career, he has earned many titles and hails as a strong wrestler. But Jinder explains that the Indian fans will give him the motivation to become the victor.

“There is the added pressure of performing in front of the home crowd but I thrive on it. The love that WWE Universe in India is going to drive me and only motivate me further and I will not disappoint that night.”

With many wins already under his belt, many hope he will successfully defend the WWE Champion title. If you feel keen to watch the wrestler live, find more on WWE’s website.