"My strategy was to play a side-to-side game."

This was the first fight of the afternoon session. The fight took place at the National Exhibition Centre Hall 4, Solihull UK on Sunday, August 7, 2022.

Nikhat Zareen who is the reigning world champion had picked the yellow metal for her flyweight triumph at the 2022 Istanbul World Championships. She had to win five successive bouts to become world champion.

There was one referee and five judges for this Birmingham 2022 Commonwealth Games gold medal match.

Nikhat in a blue vest and shorts was wearing a black bandana head covering. She sipped water before entering the ring. The match was consisting of three rounds, lasting three minutes each.

Carly McNaul in the red outfit and corner was representing Northern Ireland. 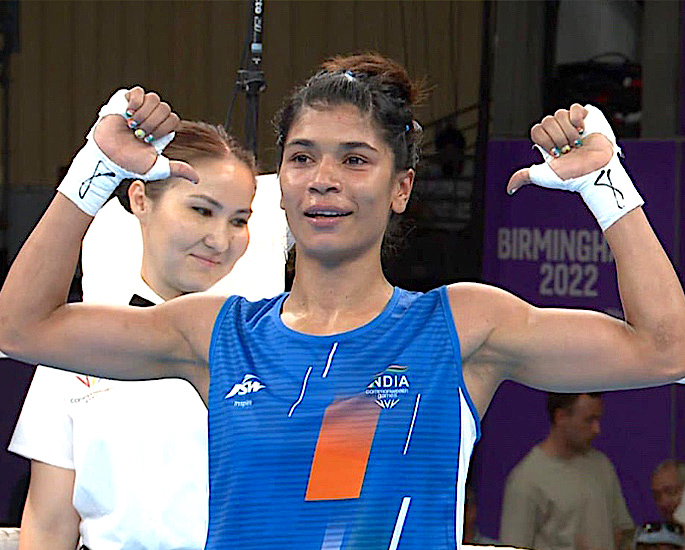 The formidable Nikhat began the fight, scoring with a left hook to her opponent. Carly was not quick enough, especially when moving her head.

In the first three-minute round, Nikhat kept her distance and was dictating terms, landing some good shots in the right places. Nikhat was impressively ahead slightly following the opening round.

It was a 10-9 return from the judges in favour of Nikhat. In the second round, Nikhat was punching and moving back, maintaining her gap, as well as forcing the pace.

The accuracy of a punch by Nikhat from the back foot was quite evident during the early part of the penultimate round. A right cross from Carly came in but without any continuous momentum.

Nothing at this stage was bothering Nikhat, despite Carly forcing the fight a little. Nikhat was just strategically clawing her way back each time Carly was pushing forward.

Thus, the timing of Nikhat was world-class and spot on, especially with her blocking Carly from the inside.

Nikhat was not even giving a sniff to Carly, making it difficult for her to score.

Nikhat then was effective at seizing the opportunity, landing a right cross and left hook with accuracy. Carly also got in a right cross of her own but made no considerable impact.

The second round also saw the five judges scoring 10-9 in favour of Nikhat.

McNaul had a long way to really catch up in the third and final round. Nikhat was great as she was never put tight to the ropes or the corners. In fact, she was centring around, using that particular space to her advantage.

Hence, following the pattern of the bout, it was yet another difficult round for Carly, especially with Nikhat going very well side to side.

With less than twenty seconds to go, Nikhat hit Carly with a left hook and right cross, demonstrating that she had all the shots under her armoury.

And with her variety and composure, the match came to a finish. It was never meant to be for the Northern Ireland competitor. The third round was virtually identical to the earlier two rounds. 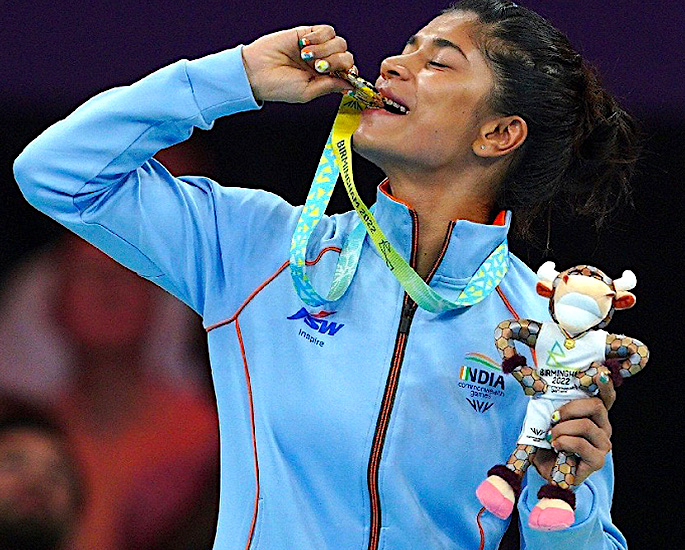 Nikhat was declared the winner by a clean sweep unanimous decision from the judges, 10-9, 1o-9, 10-9. Following the victory, Nikhat went down on her knees to thank the Almighty.

Nikhat embraced her coach, as she left NEC Hall 4, with a standing ovation. The medal ceremony came shortly afterwards, with Nikhat picking her yellow metal and reciting the national anthem of India.

After the conclusion of the medal ceremony, Nikhat Zareen came to speak with DESIblitz.com. Nikhat talking about her Gold conquering strategy said she was aware of what was to come from her opponent:

“We had a training camp in Belfast, Ireland. So, I have trained with her. As a boxer, I know how she is. My strategy was to play a side-to-side game. That’s what I did in the ring. Finally, I won this bout. I am very happy to become a champion.

Nikhat also explained the inspiration behind the multi-coloured Indian-specific varnish on her nails:

“I had promised my mum I am going to bring her a gift.”

“As I reminder I kept it [the nail varnish]…to win a gold medal for my mum.”

She also was in gratitude to her fans for supporting her, saying:

“I just want to say thank you so much for pouring so much love and sending lots of wishes on my social media accounts.

“Keep supporting me and definitely, in future coming competitions I will make you guys proud, thank you.”

In a very short space of time, Nikhat Zareen has shown her mettle. In many ways, she is the face of Indian women’s boxing.

DESIblitz congratulates gold medalist Nikhat Zareen and all the other Indian boxers for their respective medals at the Birmingham 2022 Commonwealth Games.