The brilliant opening ceremony of the Birmingham 2022 Commonwealth Games was held at the great Alexander Stadium on July 28. We round up.

"I wish each athlete and team every success."

The two-hour 28 minutes ceremony was very classy, with a lot of thought and detail going into it.

The ten-day event began on July 28, 2022, with an incredible sports and cultural curtain raiser, featuring many performances.

Over 5,000 athletes from around 72 nations paraded on the field, accompanied by some great music. The spectacular lighting and fireworks display was also unforgettable.

Athletes participating in this global multisports event are to compete in 280 events across nineteen sports. The climax falls on August 8, 2022.

We highlight the Birmingham 2022 Commonwealth Games ceremony, which got everyone in attendance buzzing.

The Build-Up, The Mastermind, Countdown, Performances and Prince Entry 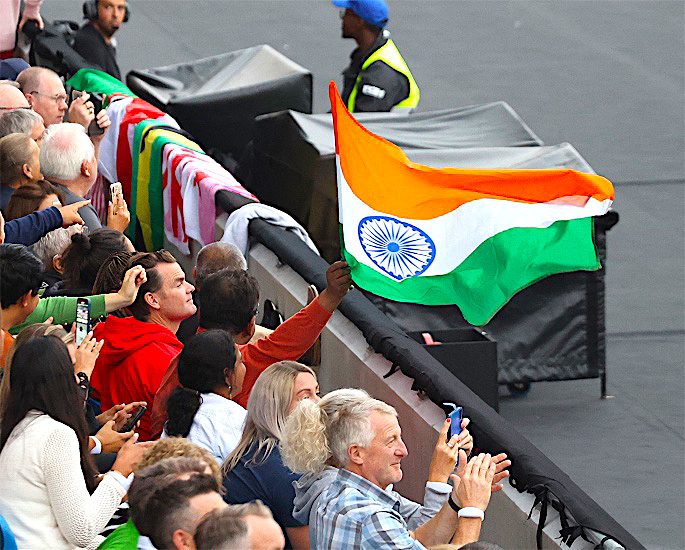 With doors opening from 17:00, fans including Desi slowly started to take their seats. Music was instantly playing in the background, including some Punjabi Desi tracks.

This featured a short clip from Artistic Director, Iqbal Khan. Internationally famed, he is known for his contemporary adaptations of classical narratives, bringing them to light on the most prominent stages globally. 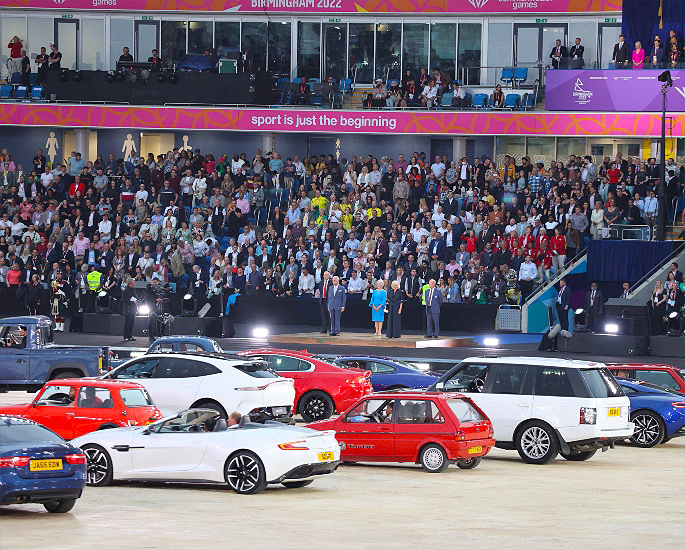 The award-winning theatre producer said a few words ahead of the ceremony:

“It’s been an unbelievable honour to guide the artistic direction for the Opening Ceremony. Since setting out on this journey, I wanted to tell Birmingham’s story.

“I wanted to tell it right – to show that there is a vivid and vibrant confidence about this place, in this moment.”

“We know this show will connect with a global audience as we celebrate the best of Birmingham on an international stage.”

As the “Ceremony Begins” time counter appeared on the digital displays, the full-capacity crowd kept themselves busy with a continuous Mexican wave.

Some members of the press also came to the party, waving their hands up in the air.

Following a collection of vintage and modern cars hovering the centre stage of the stadium, Charles, Prince of Wales and Camilla, Duchess of Cornwall came out of a prestigious Aston Martin vehicle.

As they stood by the mid-space, everyone rose for the national anthem. In the end, there was a rousing cheer from inside the newly renovated grand venue.

A spiritual context also came to the forefront, with the Arabic word Iqra recited, meaning read. Shortly afterwards Malala Yousafzai, the 2014 Nobel Peace Prize laureate, made her entry, with a short speech. 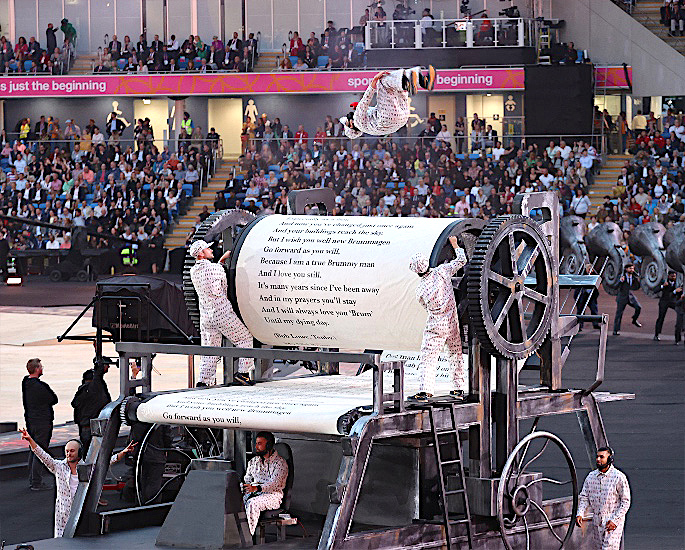 Next came a series of performances, reflecting different contexts and eras.

These included a colourful fairy tale performance and a large metallic raging bull-like figure reflective of the industrial revolution., operated by a mini tractor to name a few.

Performers dancing to some Bhangra beats also came into the act.

Dark and vibrant glow colours in the outfits of the entertainers were the perfect blend for a beautiful evening. The ground and flood lights, changing colour, also lightened up the whole atmosphere. 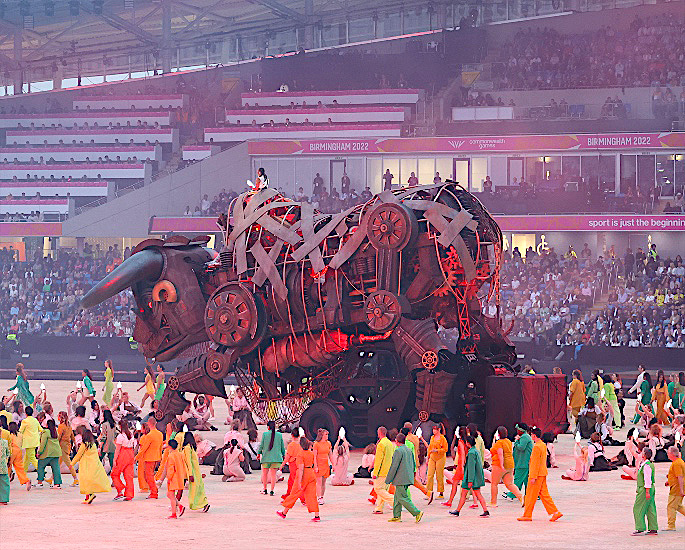 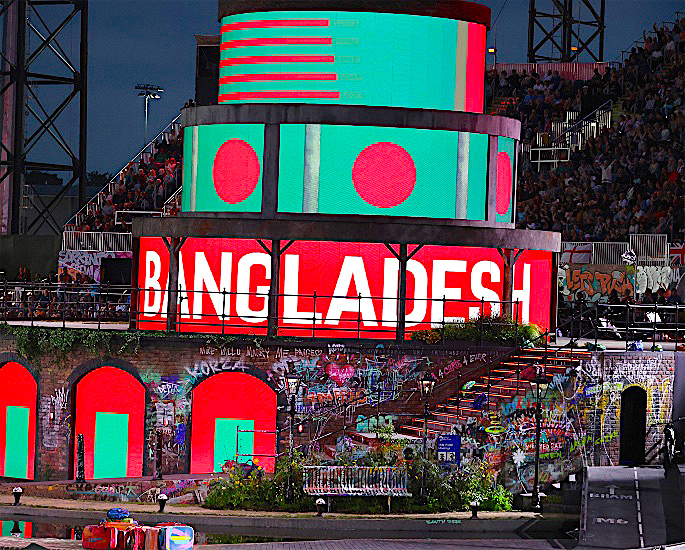 More diversity came in the form of comedian Lenny Henry as he had gone on to announce athletes from Oceania.

They were first to grace the black walkway, as a large Australian contingent led this geographical region.

The African continent came second, with introductions coming from Shazia Mirza. The African nations were also full of some tremendous versatile outfits.

America was the third continent, as the Bahamas came on first. They were followed also by Belize, Bermuda, Canada, Falkland Islands, Guyana and St Helena. 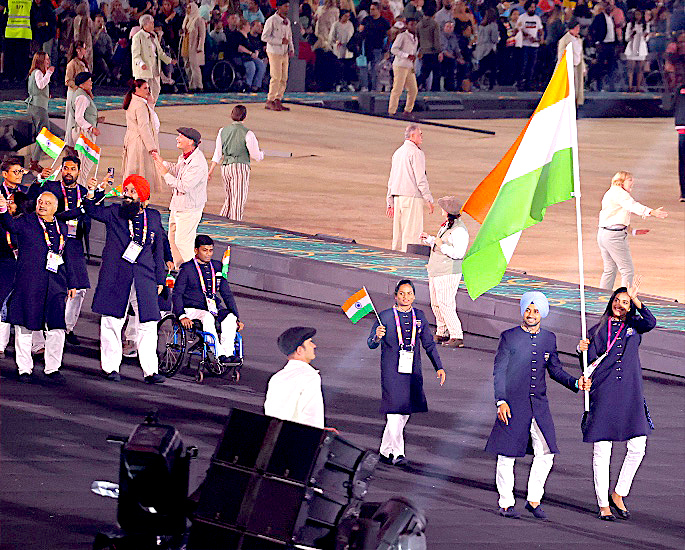 Bangladesh was the first to represent the Asia continent. They will sadly struggle, especially with archery and shooting not featuring at the Games.

Behind them were Brunei, India, Malaysia, Maldives, Pakistan, Singapore and Sri Lanka. Pakistan in their traditional green and white was led by ace wrestler Muhammad Inam Butt.

Meanwhile, for team India, Hockey star Manpreet Singh and shuttler PV Sindhu were the flag bearers. India is expected to win a few medals, with Pakistan ready to target the podium. 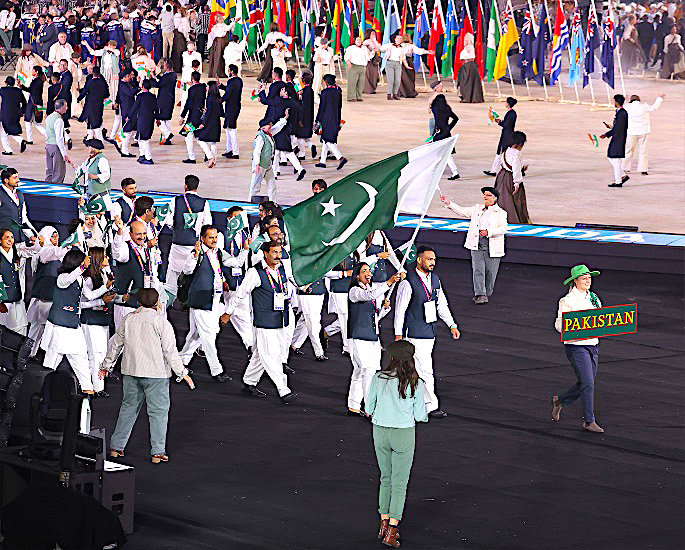 BBC presenter Noreen Khan then gave a warm Brummie welcome to athletes from the Caribbean.

Anguilla were first to walk their way through. Following next were Antigua and Barbuda, Barbados, British Virgin Islands, Cayman Islands, Dominica and Grenada.

Jamaica, Montserrat, St Kitts and Nevis, Saint Lucia, St Vincent and the Grenadines, Trinidad and Tobago, and Turks and Caicos Island were the remaining Caribbean nations.

Europe was the final continent, commencing with Cyprus. Gibraltar, Guernsey, Isle of Man, Jersey, Malta, Northern Island, Scotland (kits) and Wales were next in turn.

The blue Scottish members were in their usual kilts. Host nation England came finally as everyone erupted in joy. Their walk-in music was ‘We Will Rock You’ (News of the World: 1977) by Queen. 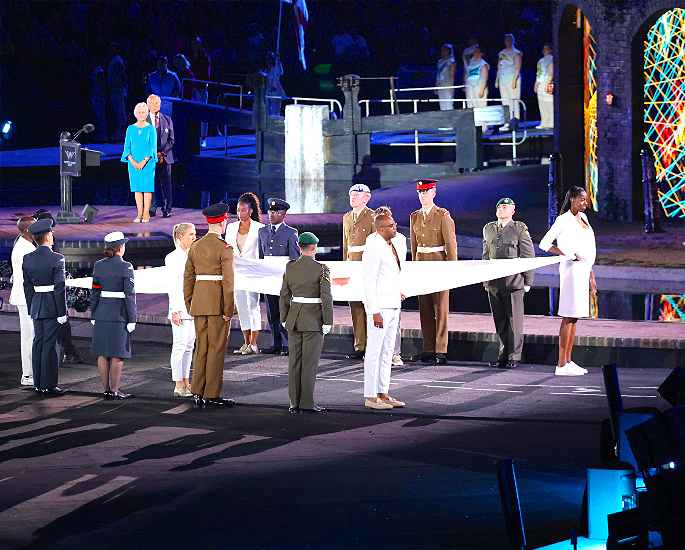 Stepping in for Her Royal Highness, Her Majesty The Queen, Prince Charles also gave a speech, addressing the spectators and millions of TV viewers:

“Over the years, the coming together of so many for the ‘Friendly Games’ has created memorable shared experiences, established long-standing relationships, and even created some friendly rivalries.

“But above all, they remind us of our connection with one another, wherever we may be in the world, as part of the Commonwealth family of nations.”

“Tonight, in the words of the founder of the Games, we embark once again on a novel adventure here in Birmingham, a pioneering city which has drawn in and embraced so many throughout its history.

“It is a city symbolic of the rich diversity and unity of the Commonwealth, and one which now welcomes you all in friendship.

“I wish each athlete and team every success. Your hard work and dedication, particularly in recent times, have been an inspiration to all of us.

“It now gives me the greatest pleasure to declare the 22nd Commonwealth Games open.”

With the Birmingham 2022 Commonwealth Games opening ceremony being electrifying, hopefully, everyone will get to see some thrilling action. World records on track and field will make it naturally more interesting.

The Games are being aired via all prime broadcasters forms and digital platforms across the world.