Scotland welcomed the world at the glitzy Opening Ceremony of the Glasgow 2014 Commonwealth Games. As an Ambassador of UNICEF, Sachin Tendulkar delivered a special message for the Games. Queen Elizabeth II officially declared the Games Open.

"It’s everyone’s dream to be asked to represent your country."

The tagline for the Glasgow 2014 Commonwealth Games has been termed as Bring It On.

With over 5,000 athletes, seventy-one participating nations, Scotland did Bring it On at the Opening Ceremony of the multi-sport event.

The glittering Opening Ceremony was declared Open by Queen Elizabeth II at Celtic Park on 23 July, 2014.

The Queen with the Duke of Edinburgh entered the stadium in a car bearing the Scottish Regiment standard. 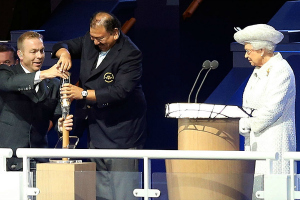 On the night, Grammy award winner Rod Stewart dominated the show, with some beautiful singing.

After travelling almost 120,000 miles in 288 days across the Commonwealth, the baton carried by adventurer, Mark Beaumont landed on the City’s River Clyde in a sea-plane. 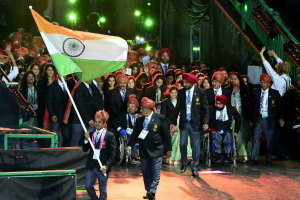 Shortly afterwards, the four and half thousand participating athletes walked out to the middle as each nation was announced on a continent basis.

The first team to make their way was India, a country, which has half the population of the Commonwealth.

Led by unlikely stars of the show, the Scottish Terriers, Team India reflected the country’s diversity and richness of colour.

At these games, all eyes will be on the Indian shooting team as they won thirty medals in Delhi 2010, including thirteen Gold.

Vijay Kumar, a Silver medalist from the London Olympics 2012 carried the flag for India. Vijay won three Gold medals at the 2010 Commonwealth Games.

“They say there’s close to a billion of us watch the ceremony across the Commonwealth, so we have an incredible chance and historic opportunity to show the world what a huge difference we can all make when we act as one to put children first.” 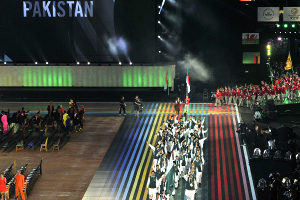 Interestingly, in the Lawn Bowls competition, Pakistan have selected two curry chefs, adopted Glaswegians named Chico Mohammed and Ali Shan Muzahir. Both Chico and Ali have spent most of their time living in the city of Glasgow where they also own a restaurant.

They have been bowling for over twenty years at Clarkston Bowling Club and Glasgow Indoor Bowling Club in Mount Florida.

Surprised by their selection, Chico said: “It was beyond our wildest dreams. When the Pakistan Lawn Bowls Federation phoned us, we thought they were going to ask us to do some coaching. But when they asked us to play, we were stunned. I couldn’t sleep all night.” 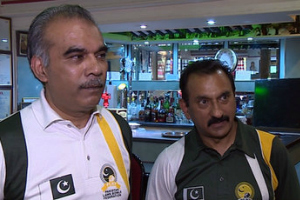 “I was over the moon when I found out. It’s everyone’s dream to be asked to represent your country. This is a once-in-a-lifetime opportunity,” said Ali.

The capacity crowd of 40,000 watching inside the stadium greeted the remaining teams. Officials, coaches and support staff accompanied each participating country.

The largest cheers were reserved for the British teams, particularly Scotland and England.

Josh Taylor of Scotland is the only athlete in the boxing squad to have won a medal at the previous Commonwealth Games. He received a Silver medal in Delhi 2010. Other players to watch out for in the Scotland team are Robbie Renwick (swimming) and Lynsey Sharp (athletics).

For England, Christine Ohuruogo is back in action since winning Gold at the 2006 Commonwealth Games in Melbourne. England’s other medal prospects include Chris Tomlinson (Long Jump) and Greg Rutherford (Long Jump).

Malaysian athletes wore black bands with flags at half-mast to remember the victims of the MH17 Malaysian Airlines disaster.

A minute’s silence was observed for the victims of the tragedy following a speech from First Minister of Scotland, Alex Salmond.

With technology at its peak, a message from space was also conveyed LIVE towards the end of the ceremony:

“We wish you a great Commonwealth Games in the best of competition. Have a great night Glasgow,” said the crew of the International Space Station.

Then came the moment of reality for all Scots as two times Commonwealth Champion, Sir Chris Hoy took the baton up the stairs, before safely placing it near the Queen.

With the help of Hoy, Prince Imran opened the baton, which contained Her Majesty’s address. Finally, Queen Elizabeth II, Head of the Commonwealth nations declared the Games Open.

The Opening Ceremony finished with a magical fireworks display, entertaining all the viewers across the Globe.

The Glasgow Games will have a special focus on the younger athletes for the future.

DESIblitz wishes the very best to all the athletes in their quest to win medals for their respective nations at the Glasgow 2014 Commonwealth Games.